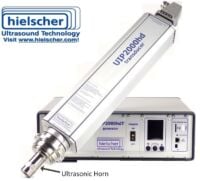 Since the ultrasonic horn and probe are under constant compression or tension during sonication, the material selection of horn and probe are crucial. High-quality titanium alloy (grade 5) is considered the most reliable, durable and effective metal to withstand stress, to sustain high amplitudes over long periods of time, and to transmit the acoustical and mechanical properties.

Dissolving is a common application of ultrasonication. The video demonstrates the rapid dissolving of a sugar crystals in water using the Hielscher UP200St.
llustration of the Effect of Ultrasonication on Dissolving Processes

High-performance ultrasonicators mostly work in the frequency range of 20-30kHz. At 20 kHz, the ultrasonic probe is typically a one-half wavelength long resonant rod, which is constantly expanding and contracting 20,000 times per second. The expansion and contraction movements are transmitted as high-power ultrasound into the process medium, i.e. fluid or slurry, in order to fulfil applications such as

How does Power Ultrasound Work? – The Working Principle of Acoustic Cavitation

For high-performance ultrasonic application such as homogenization, particle size reduction, disintegration or nano-dispersions, high-intensity, low-frequency ultrasound is generated by an ultrasound transducer and transmitted via ultrasonic horn and probe (sonotrode) into a liquid. High-power ultrasound is considered ultrasound in the range of 16-30kHz. The ultrasound probe expands and contracts e.g., at 20kHz, thereby transmitting respectively 20,000 vibrations per second into the medium. When the ultrasonic waves travel through the liquid, alternating high-pressure (compression) / low-pressure (rarefaction / expansion) cycles create minute cavities (vacuum bubbles), which grow over several pressure cycles. During the compression phase of the liquid and bubbles, the pressure is positive, while the rarefaction phase produces a vacuum (negative pressure.) During the compression-expansion cycles, the cavities in the liquid grow until they reach a size, at which they cannot absorb further energy. At this point, they implode violently. The implosion of those cavities results in various highly energetic effects, which are known as the phenomenon of acoustic / ultrasonic cavitation. Acoustic cavitation is characterized by manifold highly energetic effects, which impact liquids, solid/liquid systems as well as gas/liquid systems. The energy-dense zone or cavitational zone is known as so-called hot-spot zone, which is most energy-dense in the close vicinity of the ultrasonic probe and declines with increasing distance from the sonotrode. The main characteristics of ultrasonic cavitation include locally occurring very high temperatures and pressures and respective differentials, turbulences, and liquid streaming. During the implosion of ultrasonic cavities in ultrasonic hot-spots, temperatures of up to 5000 Kelvin, pressures of up to 200 atmospheres and liquid jets with up to 1000km/h can be measured. These outstanding energy-intense conditions contribute to sonomechanical and sonochemical effects that intensify processes and chemical reactions in various ways.
The main impact of ultrasonication on liquids and slurries are the following: 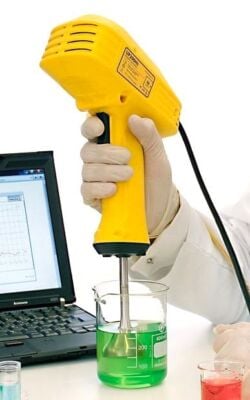 Hielscher Ultrasonics is long-time experiences manufacturer and distributor of high-power ultrasonicators, which are worldwide used for heavy-duty applications in many industries.
With ultrasonic processors in all sizes from 50 watts to 16kW per device, probes at various sizes and shapes, ultrasonic reactors with different volumes and geometries, Hielscher Ultrasonics has the right equipment to configure the ideal ultrasonic setup for your application.
The table below gives you an indication of the approximate processing capacity of our ultrasonicators: