You can produce a CBD nanoemulsion in batch or continuous mode using an ultrasonic emulsification machine. Hielscher ultrasonic homogenizers are powerful emulsifiers to produce stable CBD nano-emulsions. The ultrasonic production of cannabis oil emulsions (o/w) is an easy and fast procedure, which convinces by optimum results.

Cannabis oil emulsions are suspensions of micron-size or nano-size cannabinoids for cannabis-, hemp-, THC- or CBD-based products such as tinctures, capsules, lotions, and e-cigarette vape cartridges. Cannabinoids such as THC, CBD etc. are lipophilic (= hydrophobic). Therefore they require intense shear to disperse the cannabinoid in water-based formulations. Cannabinoids are not soluble in water, but they show a good solubility in non-polar solvents such as oils and fats. It requires a suitable emulsification technique to overcome the immiscibility of cannabinoids in water. Intense ultrasonic cavitation is well-known and well-established technique to produce fine-sized, stable emulsions (o/w, w/o, w/o/w, o/w/o, micro- and nanoemulsions).

Oil: Vegetable oils such as olive oil, coconut oil or MCT oil assist the absorption of the active substances of cannabis into the digestive system. Cannabinoids such as CBD and THC can hardly be absorbed without oil or fat. To achieve an optimal absorption, cannabis extracts are mostly emulsified into oil and then further processed into an emulsion.
Emulsifier: Lecithin, which is available in powder, granules and liquid form, is an emulsifier, which is suitable for food and medical products. For cannabis oil emulsions, lecithin is one of the most common emulsifiers. Other emulsifiers, which give good effects are gum arabic or starch-based emulsifiers.

How to Prepare a Cannabis Emulsion with Sonication

In order to prepare stable CBD nano-emulsions, a mix of Polysorbate 80 and Lecithin works very well. There is no need to buy overpriced pre-mixes as both additives are easily available in food-grade.

Ultrasonic energy requirement: approx. 300 to 400Ws/g of sonication energy at amplitudes of 40 to 70 micron.

For larger scale setups use a Hielscher InsertMPC48 to inject the CBD oil directly into the cavitational area under the ultrasonic sonotrode.

Are you looking for help finding the optimal emulsifier / surfactant for your cannabis oil product? Get in contact with DrRich, a consultant specialized in emulsifiers for stable CBD nanoemulsions! Download more information here!

Ultrasonic cavitation is a very effective emulsification method to prepare superior emulsions in the nano range. The sonication of emulsions with turbidities (micro-emulsions, approx. 150 to 100nm) makes them translucent or clear and transparent, because it reduces the CBD droplet size to diminutive droplets in the range of approx. 10nm. This increases the emulsion stability significantly. Ultrasonically produced emulsions are often self-stable without addition of an emulsifier or surfactant.
For cannabis oil, nano emulsification improves cannabinoids absorption (bioavailability) and produces a more profound effect. Therefore lower cannabis product doses can give you the same effects. 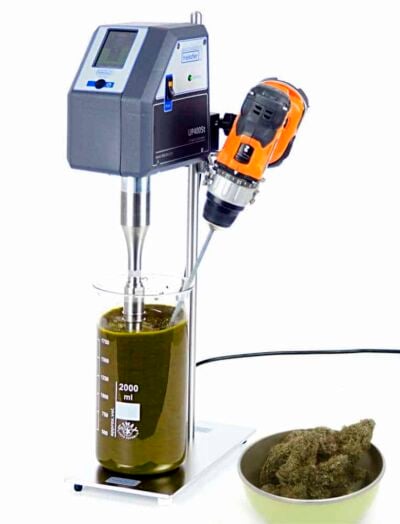 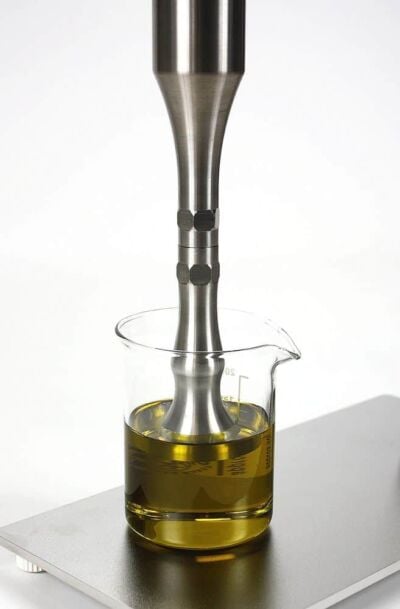 Ultrasonification is the preffered method to produce liposomal CDB or liposomal THC as pharmaceutical and cosmetic vesicles. Liposomes are lipid-based nanocarriers for active drug components, which improve the bioavailability and therapeutic effects of the active substances such as CBD or THC. Since cannabinoids are really delicate molecules, they are prone to degradation by oxidization as well as to degradation by different enzymes. Nano-encapsulation of CBD or THC in liposomes, prevents the degradation of the cannabinoids. Sonication can effectively encapsulate the cannabinoids into liposomes.
Click here to read more about liposomal encapsulation of active substances!

In order to produce long-term stable oil-in-water (o/w) nanoemulsions, it is necessary to use a suitable surfactant or to form liposomes that encapsulate the lipophilic bioactive compounds into a carrier oil. For cannabis oil, the carrier oil should have food quality and it should not interfere with appearance, taste, or stability of the final product. Coconut oil (MCT) and olive oil are good carrier oils for cannabinoids. Carrier oils are a very important factor to create a physicochemically stable emulsion since they may help to prevent the emulsion against Ostwald ripening. The Ostwald ripening is the driving force which destabilizes an emulsion by droplet coarsening. Long chain triglyceride nanoemulsions are long-term stable against Ostwald ripening. Olive oil and coconut oil contain long chain triglycerides, so that both, olive and coconut oil are a suitable carrier oils to THC or CBD.

Hielscher Ultrasonics is the leading supplier for powerful and reliable ultrasonic systems. It covers the full range from lab and bench-top devices to full industrial machines for the processing of large volumes under demanding conditions. Common applications or Hielscher ultrasonic machines include emulsification, homogenization and extraction for food and beverage as well as in the pharmaceutical or cosmetic industry.

The video shows the highly efficient emulsification of oil. The ultrasonic processor used is a Hielscher UP400St ultrasonicator, which is ideal to prepare medium size batches of high-quality emulsions.
Make Stable Nanoemulsions with the Hielscher Ultrasonics UP400St (400 Watts)
The table below gives you an indication of the approximate processing capacity of our ultrasonicators:

Ultrasonic extraction is well known and a long-term established process to extract valuable compounds from botanicals. Therefore, sonification is the ideal technique to produce high-quality CBD oils. By precisely controllable ultrasonic cavitation, plant cells are perforated and the solvent is pushed into the cell, where it absorbs intracellular compounds such as cannabinoids, terpenes, flavonoids etc.

Read more about extraction from cannabis!

Nanoemulsions are also known as miniemulsion or submicron emulsion. Nanoemulsions are emulsions with a droplet size between 20 and 500nm. A nanoemulsion is a thermodynamically stable isotropic system, which consists in two immiscible liquids (e.g. oil and water). One of the two immiscible liquids is dispersed very finely into the second phase in order to form a single phase. The addition of emulsifiers, e.g. surfactants and co-surfactants stabilize the emulsions by preventing the coalescence of the droplets. The size and shape of particles/droplets dispersed in the continuous phase defines the main difference between an emulsion and a nanoemulsion. Ostwald ripening is the major destabilization mechanism in THC or CBD nanoemulsions. Ostwald ripening is a diffusion degradation process, which means that an inhomogeneous structure such as an emulsion changes over time. The emulsion droplets increase over time as the smaller droplets dissolve and redeposit their material onto the larger droplets. The oil type has major influence on the intensity and rate of Ostwald ripening. This means that the choice of a suitable oil can affect the emulsion stability significantly. Nanoemulsions show an improved delivery of active ingredients (e.g. drugs).

Hash oil is produced by solvent extraction, e.g. ultrasonic extraction or ultrasonically-assisted supercritical C02 extraction. For the production of hash oil, preferably dry, decarboxylated plant material is used. The following liquids are frequently used solvents for hash oil extraction: ethanol, chloroform, dichloromethane, petroleum ether, naphtha, benzene, butane, methanol, isopropanol, and olive oil. Non-polar solvents such as benzene, chloroform and petroleum ether, cannot extract the water-soluble constituents of marijuana or hashish. This helps to obtain a more potent hash oil. The extraction of cannabis extracts with non-polar solvents produces a better taste product than the extraction with polar solvents. The washing of extracts with alkali can improve the odor and taste of the hash oil.
Store hash oil in an airtight container and protected it from light exposure. Exposure to air, warmth and light, causes the oil to lose its taste and psychoactivity due to aging. The addition antioxidants to hash oil formulation can reduce this negative effect.