A wide range of intermediate and consumer products, such as cosmetics and skin lotions, pharmaceutical ointments, varnishes, paints and lubricants and fuels are based wholly or in part of emulsions. Hielscher manufactures the world’s largest industrial ultrasonic liquid processors for the efficient emulsifying of large volume streams in production plants.

This video demonstrates the Hielscher ultrasonicator UP400S preparing a nano-sized oil-in-water emulsion.
Emulsifying of Oil in Water using the UP400S

Systems consisting of several ultrasonic processors of up to 16,000 watts each, provide the capacity needed to translate this lab application into an efficient production method to obtain finely dispersed emulsions in continuous flow or in a batch – achieving results comparable to that of today’s best high-pressure homogenizers available, such as the new orifice valve. In addition to this high efficiency in the continuous emulsification, Hielscher ultrasonic devices require very low maintenance and are very easy to operate and to clean. The ultrasound does actually support the cleaning and rinsing. The ultrasonic power is adjustable and can be adapted to particular products and emulsification requirements. Special flow cell reactors meeting the advanced CIP (clean-in-place) and SIP (sterilize-in-place) requirements are available, too.

Emulsions are dispersions of two or more immiscible liquids. Highly intensive ultrasound supplies the power needed to disperse a liquid phase (dispersed phase) in small droplets in a second phase (continuous phase). In the dispersing zone, imploding cavitation bubbles cause intensive shock waves in the surrounding liquid and result in the formation of liquid jets of high liquid velocity.

In order to stabilize the newly formed droplets of the disperse phase against coalescence, emulsifiers (surface active substances, surfactants) and stabilizers are added to the emulsion. As coalescence of the droplets after disruption influences the final droplet size distribution, efficiently stabilizing emulsifiers are used to maintain the final droplet size distribution at a level that is equal to the distribution immediately after the droplet disruption in the ultrasonic dispersing zone. Stabilizers actually lead to improved droplet disruption at constant energy density.

Studies at oil in water (water phase) and water in oil (oil phase) emulsions have shown the correlation between the energy density and droplet size (e.g. Sauter diameter). There is a clear tendency for smaller droplet size at increasing energy density (click at right graphic). At appropriate energy density levels, ultrasound can well achieve a mean droplet sizes below 1 micron (microemulsion).

Hielscher offers a broad range of ultrasonic devices and accessories for the efficient emulsification and dispersing of liquids. 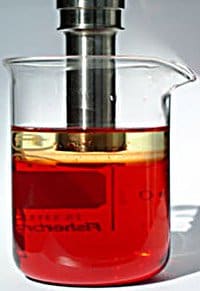 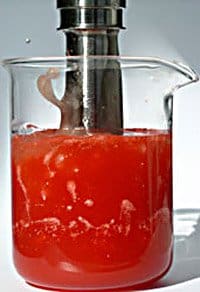