Clear Nano-Emulsions with Stuph and Ultrasonics 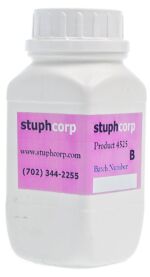 Stuph emulsifier 4514 is a sophisticated two-component emulsifier, which makes it easy to produce clear nano-emulsions. Load your nano-emulsion with bioactive compounds such as cannabidiol (CBD), tetrahydrocannabinol (THC), cannabigerol (CBG), vitamins, antioxidants, polyphenols, curcumin, resveratrol, CoQ10, quercitin or other medicinal or nutritionally beneficial substances. When encapsulated in a nano-sized oil-in-water emulsion, hydrophobic (= water-repelling) molecules become water-soluble and can be transferred in the water-based blood stream into the human body’s cells, where those bioactive substance can enfold their health-promoting effects. When not encapsulated in a nano-delivery system, the bioavailability and absorption of bioactive substances is very poor. For instance, when CBD is administered orally without nano-enhancement, only approx. 6% CBD is absorbed, whilst the majority is excreted unmetabolized.
Nano-enhanced bioactive ingredients allow for a lower dosage, since the absorption and metabolisation rate is significantly increased. Nano-emulsified supplements, dietary and health products are more effective and since less active ingredients are wasted, the production is of an efficacious and high-quality becomes more economical.
Read more about Stuph emulsifier 4514 for beverages, concentrates, sodas and other drinks!

There is an increasing demand from customers for nutritionally enriched edibles such as breads, cakes, muffins, sweets, confectionaries, chocolates, candies, gummies and other food products. To enrich food products effectively with health-promoting substances such as cannabinoids (e.g., CBD, CBD, THC, terpenes etc.), vitamins, antioxidants, polyphenols and other phyto-chemicals, those active ingredients must be made bioavailable. Nano-carriers such as nano-emulsions are the preferred technique to encapsulate bioactive compounds making them thereby water-soluble and increasing their bioavailability.
Read more about Stuph emulsifier 4514 for edibles, sweets and gummies!

Advantages of Stuph Emulsifiers for Nano-Emulsions

Stuph nano-emulsifier 1515 is a potent emulsifying complex, which is ideal to formulate skin creams, facial moisturizers, body lotions, massage balms, tinted moisturizers and concealers, serums, lip balms and glosses and other cosmetic products. Stuph emulsifiers create nano-sized, long-term stable oil-in-water emulsions, which can be loaded with active ingredients such as lipids, vitamins, antioxidants, polyphenols and other beneficial substances. With Stuph emulsifier 1515 it becomes easy to formulate highly potent skin care and cosmetic products. The nano-enhanced formulation facilitates the transport of the active ingredients into the cells, where they can enfold their full spectrum of positive effects.
Read more about Stuph emulsifier 1515 for skin care, cosmetics and personal care products! 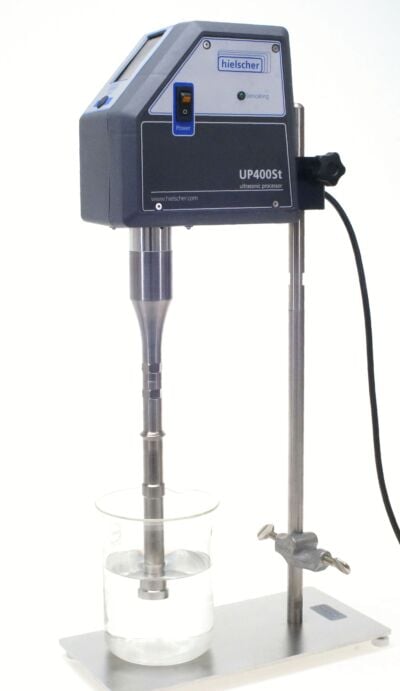 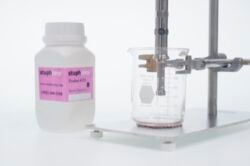 Ultrasonic homogenisation improves the mixing of Stuph emulsifiers with oil/water mixtures to formulate stable and clear nano-emulsions. Ultrasonic emulsification promotes the encapsulation of active ingredients such as CBD, THC, vitamins, polyphenols, antioxidants and other health-promoting substances into the oil-in-water emulsions. Those nano-enhanced final products have a significantly higher potency and allow for a lower dosage of the active ingredients, since the active substances are delivered at a high rate into the cells. A higher metabolisation rate means a higher potency and thereby a lower dosage of active ingredients.
Hielscher Ultrasonics’ processors are reliable work horses in production: The robustness of Hielscher’s ultrasonic equipment allows for 24/7 operation at heavy duty and in demanding environments. Automatic data protocolling on a built-in SD-card allows for product standardisation and continuously high quality. Standardize your formulation by creating a standardised recipe and sonication protocol using Hielscher ultrasonicators. This enables you to fulfil Process Standadization and Good Manufacturing Practices (GMP).
The table below gives you an indication of the approximate processing capacity of our ultrasonicators:

Emulsion-based delivery systems and particularly nano-emulsion systems are widely used in the cosmetics, pharma, food and beverage industries. Emulsions are colloidal dispersions that consist of two immiscible liquids in which one phase (dispersed phase) is dispersed as small droplets into another phase (continuous phase) in the presence of a surfactant (emulsifying agent).
Whilst an unstabilized emulsion (without surfactant) will break and separate into its original phases over time, the use of emulsifiers and intense shear forces (e.g., sonication) allow to prepare kinetically stable emulsions.

Emulsion Types: Emulsion can be differentiated into oil-in-water (o/w) and water-in-oil (w/o) as well as inverse emulsions (o/w/o or w/o/w) emulsions.

Emulsion Sizes: Emulsions are further differentiated by their droplet size. Depending on the mean droplet diameter, emulsion are termed macro-, nano, and micro-emulsions.
Macroemusions have quite large droplets with an average diameter larger than 200nm. Their appearance is turbid or milky.
Nanoemulsions have an average droplet diameter of 20–200 nm. Nanoemulsions are clear or translucent.
Microemulsions exhibit very small droplet diameters of 5–100 nm, which give them a clear appearance. They are thermodynamically stable due to their ultralow interfacial tension between the aqueous and oil phases.

Food-grade emulsions require that all components of nanoemulsions (aqueous phase, oil and emulsifier, co-surfactant) are safe for human consumption or ‘‘generally recognized as safe’’ (GRAS). Food-grade nano-emulsions gained a lot of attraction and have been established widely since they allow for the encapsulation and delivery of functional ingredients, bioactive substances and nutrients.
In nanoemulsion encapsulated active ingredients have an improved stability preventing the coalescence and separation of the droplets. Another very important advantage of nano-emulsions is the superior bioavailability and absorption rate. The nano-sized droplets show improved solubility and stability properties, offer enhanced oral bioavailability and biological efficacy of the encapsulated active substances.