The formulation of THC-enhanced beverages is challenging. – THC-infused drinks must be nano-emulsified in order to provide a high bioavailability and thereby potency, long-term stability and clear appearance. Ultrasonic nano-emulsification of THC into beverage is highly efficient and efficacious resulting in a superior THC-beverage.

In order to open new consumption ways for THC, alternatives such as THC-enriched beverages and edibles are on the rise. Ultrasonic emulsifying devices are used to produce food-grade, clean label and long-time stable nano-emulsions. Ultrasonic emulsification is compatible with food-grade stabilisers (e.g. Stuph nano-emulsifier), which help you to prepare high-quality, long-term stable clear nano emulsions with an extraordinarily high bioavailability. Ultrasonic nano-emulsions turn THC into a water-soluble, nano-enhanced mixture, which can be added to foods and beverages. Ultrasonic emulsification does not interfere with the original flavour of your formulation.
Probe-type ultrasonicators produce nano-enhanced, water-soluble THC nano-emulsions for drinks and edible recipes with superior bioavailability!

THC-nano-emulsions are nano-sized oil-in-water (O/W) emulsions, which have a clear / transparent appearance and a long-time stability. THC is an oily compound, which under natural circumstances cannot be mixed into water since oil and water reject each other. Ultrasonication provides mechanical shear, which disrupts the oil and water droplets to nano-size. Due to the nano-scale droplet sizes, nano-emulsions have a transparent, clear appearance and are kinetically stable, which means the oil and water phases do not separate. The tiny droplets of the oily bioactive compound, i.e. THC, are engulfed by very small water droplets. An emulsifier / surfactant helps to make the nano-emulsion long-term stable.

Ultrasonic nano-emulsions offer superior bioavailability, which is important for bioactive compounds such as CBD, THC, vitamins, polyphenols etc., in order to be fully absorbed and to enfold their health-beneficial properties. Thereby, ultrasonically prepared nano-emulsions are ideal for formulations in the food, beverage and cosmetic industry. Producing nano-emulsions with a great bioavailability, ultrasonic nano-emulsification is an easy and reliable technique to formulate beverages, edibles, dietary supplements, and cosmetics containing highly bioavailable THC. 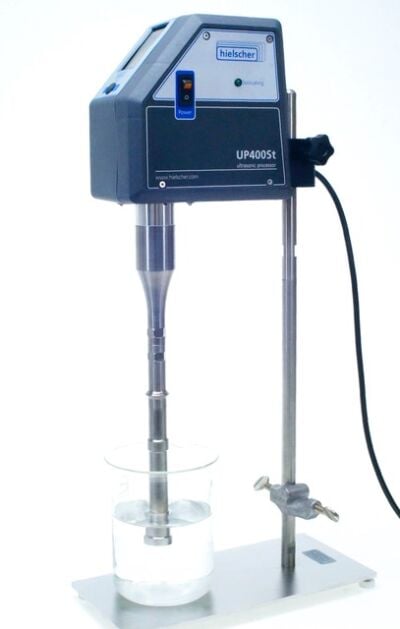 How to Prepare Clear, Water-Soluble THC Nanoemulsions via Sonication

Ultrasonic emulsifiers are easy-to-use devices, which enable you to formulate your THC oil-in-water nanoemulsion. Since ultrasonicators apply only mechanical shear to your mixture, e.g. THC in water, the resulting formulation is food-grade. Sonication is compatible with almost any emulsifying agent (also known as stabilizer / surfactant). Choosing an food-grade emulsifying agents (e.g. Stuph nano-emulsifier) helps you to prepare an elegant clean-label, food-grade nano-enhanced formulation containing THC in a highly bioavailable form.
When preparing a nano-emulsion containing THC oil, the THC oil component can be diluted into a carrier oil, e.g., hemp seed oil or MCT oil. Afterwards, the oil phase is emulsified into the water (aqueous) phase using an ultrasonicator such as the UP400St. Sonication provides an rapid and efficient nano-emulsification process. After a few minutes, the transparent, long-term stable oil-in-water nanoemulsion is ready.
With ultrasonication, the production of nanoemulsions gets so easy!

Hielscher Ultrasonics’ systems are reliable machines used in the pharmaceutical and supplement production to formulate high-quality supplement formulations, which range from nano-emulsions to liposomes, nanostructured lipid carriers, solid-lipid nanoparticles, and inclusions complexes that are loaded with vitamins, antioxidants, flavonoids, peptides, polyphenols and other bioactive compounds and provide highest bioavailability, great stability and functionality. For the nano-emulsification of THC into drinks, beverages, tinctures and supplements, Hielscher offers you powerful and reliable ultrasonicators at the size of your production requirements. To meet its customers’ demands, Hielscher supplies ultrasonicators from the compact hand-held lab homogenizer and bench-top ultrasonicators to fully industrial ultrasonic systems for the production of high-volumes of nootropics and smart drug formulations. Ultrasonic formulating processes can be run as batch or as continuous inline process using an ultrasonic flow-through reactor. A broad range of ultrasonic sonotrodes (probes) and reactor vessels are available to ensure an optimal setup for your liposome production. The robustness of Hielscher’s ultrasonic equipment allows for 24/7 operation at heavy duty and in demanding environments.

The plant genus Cannabis can be distinguished into hemp and marijuana plants.
Cannabidiol (CBD) is found in hemp and marijuana plants, whilst the compounds tetrahydrocannabinol (THC) is exclusively present in marijuana plants. Tetrahydrocannabinol (THC) and cannabidiol (CBD) are the two most important cannabinoids of at least 113 cannabinoids identified in cannabis. THC is the principal psychoactive constituent of cannabis, chemically known as (−)-trans-Δ9-tetrahydrocannabinol. Per definition, hemp plants are cannabis plants that contain less than 0.3 percent THC, while marijuana plants are cannabis plants that contain higher concentrations of THC. Hemp is also grown as crop to produce industrial fibre. CBD, the main bioactive compound in hemp, is a non-psychoactive substance, which means CBD does not make you “high”. CBD is commercially available in various forms such as tinctures, gels, gummies, oils, tablets, capsules, full spectrum extracts, topicals (creams, lotions, balms, oils and ointments) etc..
THC is the main psychoactive bioactive substance in marijuana which is responsible for the “high” feeling of euphoria. THC can be ingested via smoking a “weed” joint or by consuming THC-enriched edibles, e.g. brownies. It’s also available in oils, tinctures, capsules, and other forms of administration.
Both cannabis compounds, CBD and THC bind to the human endocannabinoid system, but each compound has very different effects (e.g. non-psychoactive vs psychoactive).
Both, CBD and THC are known as therapeutics, which are used as drug or medicinal supplement to cure or relieve several diseases and medical conditions. CBD is known for its anti-inflammatory and relaxing effects. That’s why it is used to as supplemental treatment to help with various conditions such as seizures, inflammation, pain, psychosis or mental disorders (e.g. OCD), inflammatory bowel syndrome (IBS), nausea, head aches and migraines, depression, and anxiety.
THC is administered to relieve medical conditions such as pain, muscle spasms, glaucoma, insomnia, low appetite, nausea, and anxiety.