The disintegration of cell structures (lysis) by means of ultrasound is used for the extraction of intra-cellular compounds or for the microbial inactivation.

In microbiology, ultrasound is primarily associated with cell disruption (lysis) or disintegration (Allinger 1975). When sonicating liquids at high intensities, the sound waves that propagate into the liquid media result in alternating high-pressure (compression) and low-pressure (rarefaction) cycles, with rates depending on the frequency.
During the low-pressure cycle, high-intensity ultrasonic waves create small vacuum bubbles or voids in the liquid. When the bubbles attain a volume at which they can no longer absorb energy, they collapse violently during a high-pressure cycle. This phenomenon is termed cavitation. During the implosion very high temperatures (approx. 5,000K) and pressures (approx. 2,000atm) are reached locally. The implosion of the cavitation bubble also results in liquid jets of up to 280m/s velocity The resulting shear forces break the cell envelope mechanically and improve material transfer. Ultrasound can have either destructive or constructive effects to cells depending on the sonication parameters employed.

Under intense sonication enzymes or proteins can be released from cells or subcellular organelles as a result of cell disintegration. In this case, the compound to be dissolved into a solvent is enclosed in an insoluble structure. In order to extract it, the cell membrane must be destructed. Cell disruption is a sensitive process, because the cell wall’s capability to withstand high osmotic pressure inside. Good control of the cell disruption is required, to avoid an unhindered release of all intracellular products including cell debris and nucleic acids, or product denaturation.
Ultrasonication serves as a well-controllable means for cell disintegration. For this, the mechanical effects of ultrasound provide faster and more complete penetration of solvent into cellular materials and improve mass transfer. Ultrasound achieves greater penetration of a solvent into a plant tissue and improves the mass transfer. Ultrasonic waves generating cavitation disrupt cell walls and facilitate the release of matrix components.

In general, ultrasound can lead to a permeabilization of cell membranes to ions (Mummery 1978), and it can reduce the selectivity of the cell membranes significantly. The mechanical activity of the ultrasound supports the diffusion of solvents into the tissue. As ultrasound breaks the cell wall mechanically by the cavitation shear forces, it facilitates the transfer from the cell into the solvent. The particle size reduction by the ultrasonic cavitation increases the surface area in contact between the solid and the liquid phase.

In particular the extraction of enzymes and proteins stored in cells and subcellular particles is a unique and effective application of high-intensity ultrasound (Kim 1989), as the extraction of organic compounds contained within the body of plants and seeds by a solvent can be significantly improved. Therefore ultrasound has a potential benefit in the extraction and isolation of novel potentially bioactive components, e.g. from non-utilized by-product streams formed in current processes. Ultrasound can also help to intensify the effects of enzyme treatment, and by this reduce the amount of enzyme needed or increase the yield of extractable relevant compounds.

Ultrasonication is often used to improve the extraction of lipids and proteins from plant seeds, such as soybeans (e.g. flour or defatted soybeans) or other oil seeds. In this case, the destruction of the cell walls facilitates the pressing (cold or hot) and thereby reduces the residual oil or fat in the pressing cake.

The influence of continuous ultrasonic extraction to the yield of dispersed protein was demonstrated by Moulton et al. The sonication increased the recovery of dispersed protein progressively as the flake/solvent ratio changed from 1:10 to 1:30. It showed that ultrasound is capable to peptize soy protein at almost any commercial throughput and that the sonication energy required was the lowest, when thicker slurries were used. (Moulton et al. 1982)

Liberation of Phenolic Compounds and Anthocyanins

Enzymes, such as pectinases, cellulases and hemicellulases are widely used in juice processing in order to degrade cell walls and improve the the juice extractability. The disruption of the cell wall matrix also releases components, such as phenolic compounds into the juice. Ultrasound improves the extraction process and therefore can lead to an increase in the phenolic compound, alkaloids and juice yield, commonly left in the press cake.

The beneficial effects of ultrasonic treatment on the liberation of phenolic compounds and anthocyanins from grape and berry matrix, in particular from bilberries (Vaccinium myrtillus) and black currants (Ribes nigrum) into juice, was investigated by VTT Biotechnology, Finland (MAXFUN EU-Project) using an ultrasonic processor UIP2000hd after thawing, mashing and enzyme incubation. The disruption of the cell walls by enzymatic treatment (Pectinex BE-3L for bilberries and Biopectinase CCM for black currants) was improved when combined with ultrasound. “US treatment increase the concentration of phenolic compounds of bilberry juice by more than 15%. […] The influence of US (ultrasound) was more significant with black currants, which are more challenging berries in juice processing than bilberries due to their high content of pectin and different cell wall architecture. […] the concentration of phenolic compounds in the juice increased by 15-25% by using US (ultrasound) treatment after enzyme incubation.” (Mokkila et al. 2004)

Microbial and enzyme inactivation (preservation), e.g. in fruit juices and sauces is another application of ultrasound in the food processing. Today, preservation by elevation of temperature for short periods of time (Pasteurization) is still the most common processing method for microbial or enzyme inactivation that leads to longer shelf-life (preservation). Because of the exposure to high temperature, this thermal method has often disadvantages for many food products.
The production of new substances from heat-catalyzed reactions and the modification of macromolecules as well as the deformation of plant and animal structures may reduce in a loss of quality. Therefore, thermal treatment can cause undesirable alterations of sensory attributes, i.e. texture, flavor, color, smell, and nutritional qualities, i.e. vitamins and proteins. Ultrasound is an efficient non-thermal (minimal) processing alternative.

Heat generated locally by the cavitation and the created radicals can lead to an inactivation of enzymes by sonication (El’piner 1964). At sufficiently low levels of sonication structural and metabolic changes can occur in cells without their destruction. The activity of Peroxidase, which is found in most raw and unblanched fruits and vegetables and can be particularly associated with the development of off-flavors and browning pigments can be reduced substantially by the use of ultrasound. Thermoresistant enzymes, such as lipase and protease that withstand ultra-high-temperature treatment and which can reduce the quality and shelf-life of heat-treated milk and other diary products can be inactivated more effectively by the simultaneous application of ultrasound, heat and pressure (MTS).

Ultrasound has demonstrated its potential in the destruction of food-borne pathogens, like E.coli, Salmonellae, Ascaris, Giardia, Cryptosporidium cysts, and Poliovirus.

Synergies of Ultrasound with Temperature and Pressure

Ultrasonication is often more effective when combined with other anti-microbial methods, such as:

Unlike other non-thermal processes, such as high hydrostatic pressure (HP), compressed carbon dioxide (cCO2) and supercritical carbon dioxide (ScCO2) and high electric field pulses (HELP), ultrasound can be easily tested in lab or bench-top scale – generating reproducible results for scale-up. The intensity and the cavitation characteristics can be easily adapted to the specific extraction process to target specific objectives. Amplitude and pressure can be varied in a wide range, e.g. to identify the most energy efficient extraction setup. Tough tissues should undergo maceration, grinding or pulverization prior to ultrasonication.

To produce small amounts of recombinant proteins for the study and characterization of their biological properties, E.coli is the bacterium of choice. Purification tags, e.g. polyhistidine tail, beta-galactosidase, or maltose-binding
proteins, are commonly joined to recombinant proteins in order to make them separable from cell extracts with a purity sufficient for most analytical purposes. Ultrasonication allows to maximize the protein release, in particular when the production yield is low and to preserve the structure and activity of the recombinant protein.

The disruption of E.coli cells in order to extract the total Chymosin protein was studied by Kim and Zayas.

Saffron is known as most expensive spice on the world market and is distinguished by its delicate flavour, bitter taste and attractive yellow colour. The saffron spice is obtained from the red stigma of the flower of saffron crocus. After drying, these parts are used as a seasoning in cuisine or as colouring agent. The intensive characteristic flavor of saffron results especially from three compounds: crocins, picrocrocin and safranal.

Kadkhodaee and Hemmati-Kakhki have showed in a study that ultrasonication increased the extraction yield significantly and reduced the processing time considerably. In fact, results by ultrasound extraction were conspicuously better than by traditional cold water extraction, which is proposed by ISO. For their research, Kadkhodaee and Hemmati-Kakhki have used Hielscher’s ultrasonic device UP50H. Best results have been achieved with pulsed sonication. This means that short pulse intervals were more effective than a continuous ultrasonic treatment.

At controlled intensities, the application of ultrasound to biotransformation and fermentation may well result in an enhanced bioprocessing, due to induced biological effects and due to facilitated cellular mass-transfer. The influence of the controlled application of ultrasound (20kHz) on the oxidation of cholesterol to cholestenone by resting cells of Rhodococcus erythropolis ATCC 25544 (formerly Nocardia erythropolis) was investigated by Bar.

This system is typical of microbial transformations of sterols and steroids in that the substrate and the products are water insoluble solids. Therefore, this system is rather unique in that both the cells and the solids may be subject to the effect of ultrasound (Bar, 1987). At a sufficiently low ultrasonic intensity which preserved the structural integrity of the cells and maintained their metabolic activity, Bar observed a significant enhancement in the kinetic rates of the biotransformation in microbial slurries of 1.0 and 2.5 g/L cholesterol when sonicated for 5s every 10mn with a power output of 0.2W/cm². Ultrasound showed no effect on the enzymatic oxidation of cholesterol (2.5g/L) by cholesterol oxidase.

The utilization of ultrasonic cavitation for extraction and food preservation is a new powerful processing technology that can not only be applied safely and environmentally friendly but also efficiently and economically. The homogenizing and preserving effect can be easily used for fruit juices and purees (e.g. orange, apple, grapefruit, mango, grape, plum) as well as for vegetable sauces and soups, like tomato sauce or asparagus soup. 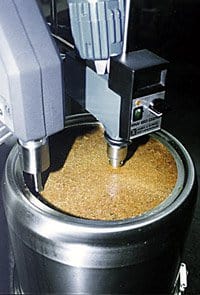