Anthocyanins are widely used as natural colorants in the food industry. They have a wide spectrum of colour tones, ranging from orange through red, to purple and blue, depending on the molecular structure and pH value. The interest in anthocyanins is not only based on their colouring effect, but also due to their health-beneficial properties. Due to growing environmental and health concerns in regards to synthetic dyes, natural dyes are a great alternative as environmental-friendly colorant for the food and drug industry. 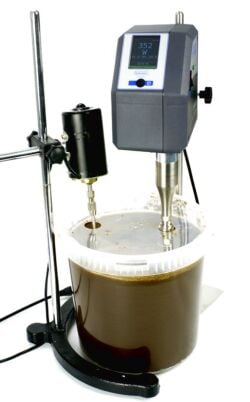 Ultrasonicator UP400St for high-speed extraction of botanicals in batches.

How to Extract Anthocyyanins with Ultrasound? – Case Studies 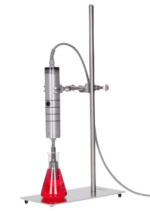 Purple rice of the strain Oryza Sativa (also known as Violet Nori or violet rice) is extraordinarily rich in phenolics such as the favonoid group of anthocyanins. Turrini et al. (2018) used ultrasonic extraction to isolate polyphenolics such as anthocyanins and antioxidants from the caryopsis (in whole, brown, and parboiled form) and the leaves of purple rice. Ultrasonic extraction was performed using a Hielscher UP200St (200W, 26kHz, pic. left) and ethanol 60% as solvent.
In order to preserve anthocyanin integrity, the ultrasonic extracts were stored at −20°C, which allowed to store them for at least up to three months.
Cyanidin-3 glucoside (also known as chrysanthemin) was by far the major detected anthocyanin in ‘Violet Nori’, ‘Artemide’ and ‘Nerone’ cultivars investigated in the study of Turrini et al., whilst peonidin-3-glucoside and cyanidin-3-rutinoside (also antirrhinin) were found in lower amounts.
The violet leaves of Oryza Sativa are an excellent source of anthocyanins and total phenolic content (TPC). With an amount approx. 2–3-fold higher than those in rice and flour, the Oryza leaves present an inexpensive raw material for the extraction of anthocyanins. An estimated yield of about 4 kg anthocyanin/t fresh leaves is significantly higher than those of 1 kg anthocyanin/t rice, calculated on the basis of the medium anthocyanin amounts detected in ‘Violet Nori’ rice (1300 µg/g rice, as cyanidin-3-glucoside) for a yield of about 68 kg of rice from 100 kg paddy.

Freshly cut red cabbage pieces of 5mm dimension (cubic shape) and 92.11 ± 0.45 % moisture content were used for this experiment. A jacketed glass beaker (volume: 200ml) was filled with 100ml of distilled water and 2g of red cabbage pieces. The beaker was covered with aluminium foil to prevent loss of solvent (water) by evaporation during the process. In all experiments the temperature in the beaker was maintained using thermostatic controller. Samples were finally collected, filtered and centrifuged at 4000rpm and supernatants were utilized to determine the anthocyanin yield. Extraction in water bath was carried out as control experiment.
The optimum yield of anthocyanin from red cabbage was determined at the power of 100 W, the time of 30 min and the temperature of 15°C which resulted the anthocyanin yield of about 21 mg/L.
Due to its color changes on pH value and its intense colouring, red cabbage dye has been used as a pH indicator in pharmaceutical formulations or as a antioxidants and colorants in food systems, respectively. 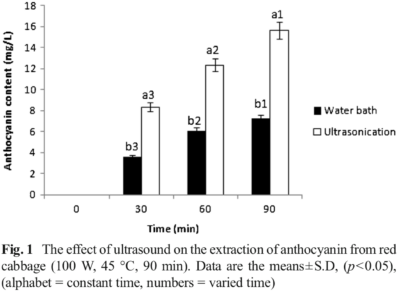 Other studies demonstrate the successful ultrasonic extraction of anthocyanins from blueberries, blackberries, grapes, cherries, strawberries, and purple sweet potato amongst others. 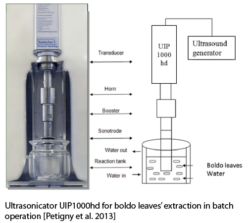 Sonication setup with UIP1000hdT for the extraction of bioactive compounds from botanicals in a batch. [Petigny et al. 2013]

Hielscher Ultrasonics is specialized in manufacturing high-performance ultrasonic processors for the production of high-quality extracts from botanicals.
Hielscher’s broad product portfolio ranges from small, powerful lab ultrasonicators to robust bench-top and fully industrial systems, which deliver high intensity ultrasound for the efficient extraction and isolation of bioactive substances (e.g. anthocyanins, gingerol, piperine, curcumin etc.). All ultrasonic devices from 200W to 16,000W feature a coloured display for digital control, an integrated SD card for automatic data recording, browser remote control and many more user-friendly features. The sonotrodes and flow cells (the parts, which are in contact with the medium) can be autoclaved and are easy to clean.
Hielscher’s robust ultrasonic processors are built for 24/7 operation under full load, require low maintenance and are easy and safe to operate. A digital colour display allows for a user-friendly control of the ultrasonicator.
Our systems are capable to deliver from low up to very high amplitudes. For the extraction of cannabinoids and terpenes, we offer special ultrasonic sonotrodes (also known as ultrasonic probes or horns) that are optimized for the sensible isolation of high-quality active substances. All our systems can be used for the extraction and the afterward emulsification of cannabinoids. The robustness of Hielscher’s ultrasonic equipment allows for continuous operation (24/7) at heavy duty and in demanding environments.

The precise control of the ultrasonic process parameters ensures reproducibility and process standardization.
The table below gives you an indication of the approximate processing capacity of our ultrasonicators: 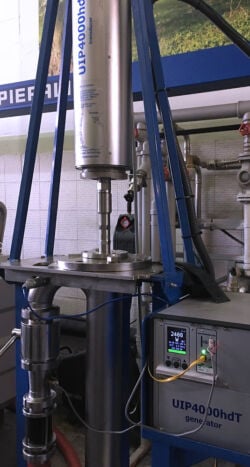 How Does Ultrasound-Assisted Extraction Work?

The application of intense ultrasound waves to a liquid medium results in cavitation. The phenomenon of cavitation leads locally to extreme temperatures, pressures, heating/cooling rates, pressure differentials and high shear forces in the medium. When cavitation bubbles implode on the surface of solids (such as particles, plant cells, tissues etc.), micro-jets and interparticlular collision generate effects such as surface peeling, erosion and particle breakdown. Additionally, the implosion of cavitation bubbles in liquid media create macro-turbulences and micro-mixing.
Ultrasonic irraditation of plant material fragments the matrix of plant cells and enhances the hydration of the same. Chemat et al (2015) conclude that ultrasonic extraction of bioactive compounds from botanicals is the result of different independent or combined mechanisms including fragmentation, erosion, capillarity, detexturation, and sonoporation. These effects disrupt the cell wall, improve mass transfer by pushing solvent into the cell and sucking phyto-compound loaded solvent out, and ensure liquid movement by micro-mixing.

Ultrasonic irraditation of plant material fragments the matrix of plant cells and enhances the hydration of the same. Chemat et al. (2015) conclude that ultrasonic extraction of bioactive compounds from botanicals is the result of different independent or combined mechanisms including fragmentation, erosion, capillarity, detexturation, and sonoporation. These effects disrupt the cell wall, improve mass transfer by pushing solvent into the cell and sucking phyto-compound loaded solvent out, and ensure liquid movement by micro-mixing.
Ultrasonic extraction achieves a very rapid isolation of compounds – outperforming conventional extraction methods in shorter process time, higher yield, and at lower temperatures. As a mild mechanical treatment, ultrasound-assisted extraction avoids the thermal degradation of bioactive components and excels in comparison with other techniques such as conventional solvent extraction, hydrodistillation, or Soxhlet extraction, which are known to destruct heat-sensitive molecules. Due to these advantages, ultrasonic extraction is the preferred technique for the release of temperature-sensitive bioactive compounds from botanicals.

Anthocyanins are vacuolar plant pigments, which can appear red, purple, blue or black. The colour expression of the water-soluble anthocyanin pigments depends on their pH value. Anthocyanins are found in the cell vacuole, mostly in flowers and fruits, but also in leaves, stems, and roots, where they are found mostly in outer cell layers such as the epidermis and peripheral mesophyll cells.
Most frequently occurring in nature are the glycosides of cyanidin, delphinidin, malvidin, pelargonidin, peonidin, and petunidin.
Prominent examples of plants rich in anthocyanins include vaccinium species, such as blueberry, cranberry, and bilberry; Rubus berries, including black raspberry, red raspberry, and blackberry; blackcurrant, cherry, eggplant, black rice, ube, Okinawan sweet potato, Concord grape, muscadine grape, red cabbage, and violet petals. Red-fleshed peaches and apples contain anthocyanins. Anthocyanins are less abundant in banana, asparagus, pea, fennel, pear, and potato, and may be totally absent in certain cultivars of green gooseberries.

Structure of the main anthocyanins