Power generators, ship engines and railway engines, which are fuelled with diesel, can be run more efficiently when water-in-diesel emulsions are used. Water-diesel emulsion fuels reduce the fuel consumption, lower the combustion temperature, burn cleaner and reduce emissions, such as NOx and soot. Ultrasonic emulsification is a reliable, simple and efficacious method to produce high-quality water-in-diesel fuels.

WiDE (W/D emulsion) is defined as blend of the naturally immiscible liquids of water droplets (dispersed/internal phase) in diesel (continuous/external phase). An emulsifying agent is added in low concentrations in order to improve the emulsions stability and lower the mixing energy requirement.

A two-phase emulsion describes the mixture of water in diesel without the use of any surfactant. For a two-phase WiDE, the water and diesel feeding streams are ultrasonically emulsified right upfront of the engine. The ultrasonic two-phase water-in-diesel emulsion goes directly from the ultrasonic flow-cell reactor into the combustion engine. Without surfactant, the emulsion is not made for storage, but for direct combustion.

Ithnin et al. (2018) studied the effect of water-in-diesel emulsion fuel (WiDE) on a single cylinder, direct injection diesel engine. Water and diesel were stored in different units, from which they have been quantitatively transferred into a mixing system. The mixing system consisted in a combination of high shear mixer and ultrasonic homogenizer. The shear mixer provided a crude pre-mix of water and diesel, whilst the sonication was used for a fine-sized, uniform emulsion. The water-diesel emulsion was prepared with 5% water. The homogeneous WiDE fuel was directly transferred from the mixing system into the into the engine. The prepared WiDE fuel did not contain any surfactants, therefore being termed as a long-term unstable emulsion fuel (UW/D). The diesel engine was tested under four different load conditions (1 kW (25%), 2 kW (50%), 3 kW (74%), 4 kW (100%)) and with a constant speed of 3000 rpm. In order to compare the effects such as fuel performance and emissions, a surfactant-stabilized emulsion fuel (stable emulsion (SW/D)) and neat diesel fuel (D2) were also tested on the same engine. 5% of water is used for both unstable emulsion and stable emulsion.

The engine test shows that water-diesel emulsion fuel without surfactant (UW/D) results in significant improvement of the engine with a 3.59% increase in brake thermal efficiency (BTE) and 3.89% reduction in brake specific fuel consumption (BSFC) as compared to neat diesel fuel. The emulsion fuels, both stabilized (SW/D) and unstabilized (UW/D), increased the thermal efficiency of the engine due to the micro-explosion phenomenon. The micro-explosion phenomenon causes a rapid evaporation of emulsified water droplets. Since the minute water droplets are surrounded in oil, the intense evaporation process disrupts the droplets violently into very fine particles, which promotes the mixing of air and fuel. The droplet disruption and mixing with air increases the combustion efficiency significantly.
The results show that the concept of producing and transferring the water-diesel emulsion fuel in real-time into the engine without using surfactant works very well. The immediate transfer of the ultrasonically prepared water-diesel mixture eliminates the stabilization problem for stored emulsion fuel as well as the dependency on surfactant. Unstable water-diesel emulsion fuel (UW/D) reliably maintained its emulsion form without reaching to sedimentation stage within 25sec (see picture below). 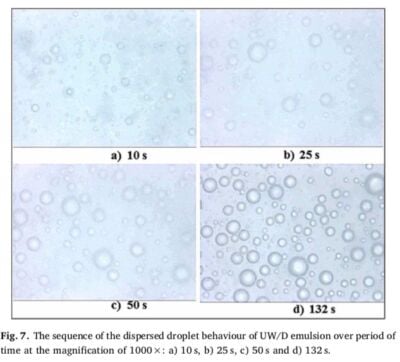 When compared to neat diesel fuel, the water-in-diesel emulsion fuel has a significantly reduced exhaust emission of nitrogen oxides (NOx) and particulate matter (PM) with an average reduction of 31.66% and 16.33% respectively. 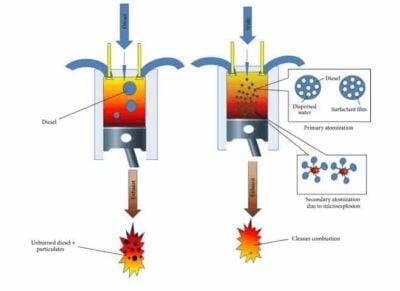 Primary and secondary atomisation in spray flame of emulsified fuel. 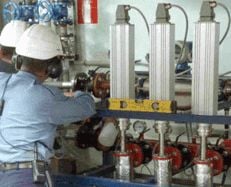 A ternary phase emulsion, also known as three-phase emulsion, consists in water, oil and a surfactant. During the ultrasonic emulsification of the water into the diesel phase a surfactant is added. The emulsifying agent prolongs the emulsion stability and allows for storing the water-in-diesel fuel. The W/D emulsion stability depends on the emulsifier, the ultrasonic process parameters and temperature. With the right combination of surfactant and sonication parameters, a significant long-term stability of WiDE can be achieved.

The installation and retro-fitting of an ultrasonic emulsification system is simple, safe and inexpensive. W/D emulsion fuels can be used in combination with any conventional diesel engines (e.g., power generators, railway engines, ship engines) without modification.

Water-in-Diesel emulsion fuels consist in suspended water particles in a continuous diesel phase. When combusted, the fine-sized water droplets in the emulsion fuel reach their superheated stage faster than the diesel and create a vapor expansion break-up (spontaneous explosion) during the combustion, creating very fine particles. Due to the increased surface area of the minute particles combined with intake air, the air and fuel mixing is significantly improved and increases thereby the combustion efficiency. (Ivanov, Nevedov 1965)

Hielscher Ultrasonics supplies high-performance ultrasonic processors for the continuous production of high-quality (nano-)emulsions. Superior ultrasonic performance, robustness, and a small footprint make Hielscher Ultrasonicators the ideal mixing system for water-in-diesel emulsion fuels. Wether you want to produce emulsion fuels for the direct injection into a combustion engine or stable emulsion fuels for storage and later combustion, Hielscher Ultrasonics has the most suitable setup for your application. From smaller ultrasonic emulsion systems for the integration in railway locomotives and inland marine vessels up to the generation of large aqua-fuel volumes for power plants and huge marine vessels – our clusters of ultrasonic processors allow for the emulsion fuel processing of any volume.
Besides high ultrasonic output, reliability and robustness, Hielscher Ultrasonics’ industrial ultrasonic processors can be precisely controlled and monitored. Temperature and pressure sensors transmit the data to the generator, where all important process parameters such as amplitude, net and total energy, temperature and pressure are recorded on a built-in SD-card. The intelligent software control allows to establish and set exact process parameters for a standardized emulsion fuel of continuously high-quality. The jacketed ultrasonic flow reactor can be efficiently cooled and allow to process the emulsion at specified temperatures. The robustness of our ultrasonic equipment allows for 24/7 operation at heavy duty and in demanding environments.
The table below gives you an indication of the approximate processing capacity of our ultrasonicators:

An emulsion is a liquid system consisting of two or more immiscible fluids, where one or more phases (disperse phase) are finely dispersed in the other (continuous phase). For water – diesel fuel emulsions, water is dispersed as fine droplets in the continuous diesel fuel phase. This type of emulsion is known as “water-in-fuel” emulsion or as aquafuel.