An emulsion is a two-phase system of two immiscible liquids, where one phase, the so-called internal or dispersed phase, is distributed as small droplets into the other, so-called external or continuous, phase. To prepare an emulsion, generally energy input into the two-phase system is required. Ultrasonic shear forces are well proven to be highly efficient to produce long-term stable emulsions with nano-sized droplets and of superior quality. 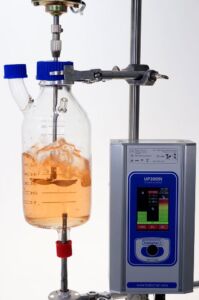 The physical effects of ultrasound induced by acoustic cavitation results in the disruption of oil and water droplets and facilitates thereby the formation of stable O/W and W/O emulsions with very small droplets size in the micron- and nano-size. Due to very small droplet size and its high surface area, nanoemulsions offer extraordinarily high bioactive properties, which is important for foods and supplements, pharmaceuticals and cosmetic production. Due to the minute droplet size, the bioactive compound can penetrate cells rapidly. Also in material science and industry, nano-emulsions are important for the manufacturing of high-performance coatings, paints, polymers and other composites. Ultrasonically prepared nanoemulsions are usually significantly more stable than macroemulsions and do not show sedimentation, coalescence or flocculation. 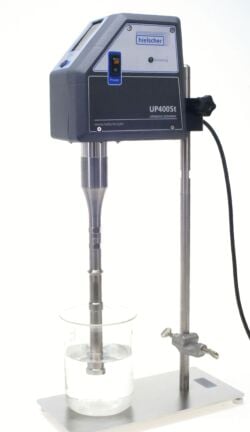 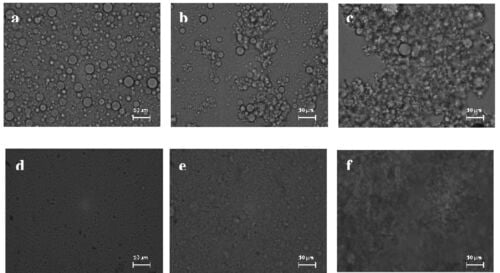 Taha et al. (2020) conclude in their review paper that High-Intensity Ultrasonics (HIU) “could be used to improve the emulsifying properties of food emulsifiers such as proteins and polysaccharides and enhance the stability of their emulsions. Protein-polysaccharide complex stabilized emulsions produced by HIU showed better stability against environmental stresses than the emulsions stabilized by individual components. Moreover, several studies showed that HIU homogenizers were more energy efficient than high pressure homogenizers and microfluidizers.” (Taha et al., 2020) 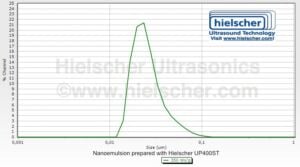 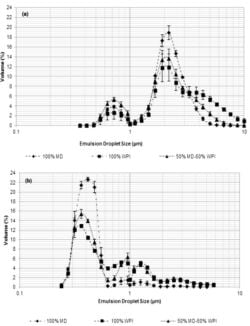 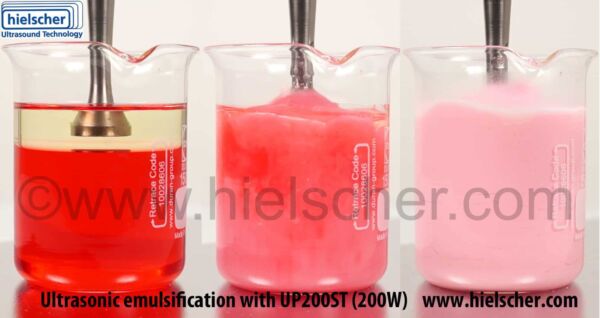 Ultrasonic preparation of an oil-in-water (O/W) emulsion (red water / yellow oil). A few seconds of sonication turn the two phases of water and oil into a fine emulsion.

Hielscher Ultrasonics supplies high-power, low-frequency ultrasonic emulsifiers at any scale for research, process development, R&D and industrial production of very large volume streams. Our broad portfolio offers the ideal ultrasonic processor at any size and for any industry.
Hielscher Ultrasonics’ industrial ultrasonic processors can deliver very high amplitudes. Amplitudes of up to 200µm can be easily continuously run in 24/7/365 operation. For even higher amplitudes, customized ultrasonic sonotrodes are available. All process parameters can be exactly controlled and monitored via smart software. 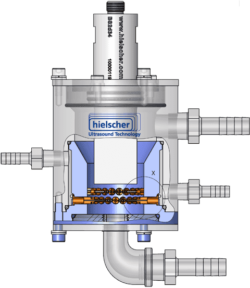 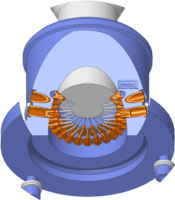 The MultiPhaseCavitator – MPC48insert – is a unique insert for Hielscher flow cell reactors. The design of the MultiPhaseCavitator features 48 fine cannulas that inject the second phase of the emulsion directly into cavitational hot-spot. In the cavitation zone, the fine strands of the injected second phase get cut by ultrasonic frequency waves of 20kHz. This means the injected fluid gets cut by 20,000 vibration strokes per second, which produces extraordinarily minute droplets in the nano range. The ultrasonic shear, shock waves and turbulences emulsifies these small droplets within the continuous phase and produces a superior nano-emulsion of high stability.

Want to Buy an Ultrasonic Emulsifier?

Contact us know by filling the contact form below, sending us an email, or calling us!
Our well-experienced team will be glad to discuss your emulsion application with you and to recommend you the most suitable ultrasonic emulsifier system!

Checklist for Buying the Ultrasonic Emulsifier fulfilling your Needs

What is an Emulsion? – Definition of the Term “Emulsion”

An emulsion is a fluid systems consisting of at least two immiscible liquids, where one of the liquids is dispersed in the other as small droplets. The phase of small, distributed droplets is called dispersed or internal phase, whilst the other phase is called continuous or external phase. There are two main types of emulsions, which is distinguished between: The oil-in-water (O/W) and water-in-oil (W/O) emulsions. In the oil-in-water (O/W) emulsion, the internal phase is an oil or oil miscible liquid, and the external phase is water or a water miscible liquid. In the water-in-oil (W/O) emulsion, the internal phase is the water-like liquid, while the external phase is the oil-like liquid.
Most emulsions require an emulsifying agent, known as stabilizer or surfactant. The droplet size plays also a crucial role regarding emulsion stability. The smaller the droplet size, the more stable is the emulsion.