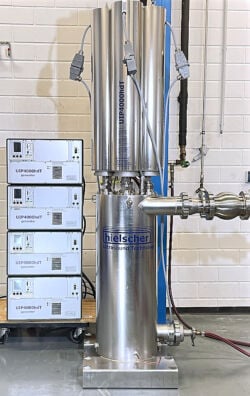 Industrial ultrasonic flow-through system for the production of wax emulsions.

How to prepare a stable Paraffin Wax Emulsion
The nano-sized wax emulsion is formulated from molten paraffin wax (as oil phase), distilled water, and anionic SDS as surfactant. In order to form a coarse pre-mixture, wax, water and surfactant are homogenized using a magnetic stirrer at 1000 rpm. Therefore, the surfactant (concentration 10 mg/ml of emulsion) and water are mixed in a beaker and heatet to approx. 65–70ºC. Then, the paraffin wax is drop-wise added by keeping a 0.2 oil-phase volume fraction under magnetic stirring.
After complete addition of the paraffin wax, the coarsely pre-mixed emulsion is sonicated with an ultrasonic bench-top homogenizer UIP1000hdT (1000W, 20kHz) for approx. 15 min. The ultrasonic emulsification process results in a nano waxemulsion with a very high stability.

Wax emulsions can be stabilized by either a steric mechanism (using nonionic emulsifiers) or by an electrostatic mechanism (using ionic emulsifiers, most often anionics). Combining anionic and nonionic emulsifiers provides the emulsion the optimum stability because wax particles are protected through both stabilization mechanisms. This is referred to as the electro-steric stabilization mechanism.
For the emulsification of waxes, various emulsifiers or surfactants, which can be anionic, cationic or non-ionic, can be used. The most commonly used surfactants are fatty alcohol ethoxylates as non-ionic surfactants since they offer an extraordinary stability against hard water, pH-shocks and electrolytes. For other specific material characteristics, various other are used, e.g. anionic surfactants for better hydrophobicity or cationic surfactants for better adhesion.
Note: The smaller the droplets, the more surfactant is required to cover the droplet surface since the V/S ratio of spheres is the following: S/V = 3/R. For any increase, x*l or x*r in length or radius, the increase in surface area is x squared (x2) and the increase in volume x is cubed (x3).

Formulating with Wax Emulsions and Dispersions

Ultrasonic homogenizers are not only used to form wax emulsions / dispersions – they are used to process the wax emulsions in further steps to incorporate the emulsion as an additive into the final product (e.g. coatings, laquers, paints, cosmetics etc.).

Hielscher Ultrasonics is worldwide renowned supplier of high-power ultrasonic homogenizers. Our ultrasonicators can be found worldwide as reliable and robust “work horses” in the chemical, pharma, cosmetic and food industry. Hielscher’s industrial-grade ultrasonicators create very high amplitudes of up to 200µm (and higher on demand) in order to generate intense cavitation and high shear. As result, ultra-fine nano emulsions and dispersions with very narrow particle distributions are produced. Our high-power ultrasound systems help you to obtain superior quality of your wax formulations.
The robustness of Hielscher’s ultrasonic equipment allows for 24/7 operation at heavy duty and in demanding environments. 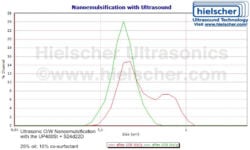 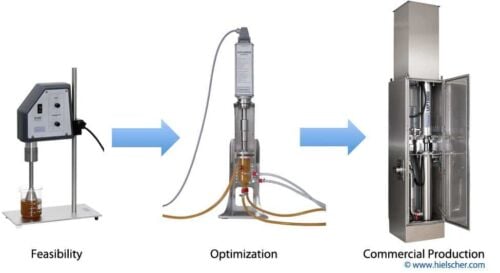 Ultrasonic Processing: Hielscher supports you from feasibility and optimization to commercial production!

Waxes are defined as a diverse class of organic compounds that are hydrophobic, malleable solids at near ambient temperatures. Waxes are composed from various components including hydrocarbons (normal or branched alkanes and alkenes), ketones, diketones, primary and secondary alcohols, aldehydes, sterol esters, alkanoic acids, terpenes (squalene) and monoesters (wax esters). The chemical composition of waxes is complex and varies, but in general waxes contain a relatively high proportion of alkanes and the hydrocarbons have long or very long carbon chains (from 12 up to about 38 carbon atoms). They are solid in a large range of temperature (fusion point between 60°C and 100°C). When molten, they turn into a low viscosity liquid.
They are characterized by their insolubility in water but solubility in organic, nonpolar solvents. Waxes can be distinguished in natural (plant-, animal-derived), semi-synthetic and synthetic waxes.
For commercial production of waxes, crude oil is the main source.

The two most important petroleum wax types are paraffin and microcrystalline waxes:
Paraffin waxes mostly features a white, odorless, tasteless, waxy solid consistency, with a typical melting point between 46°C and 68°C (115°F and 154°F), and a density of approx. 900 kg/m3. It has a macrocrystalline structure and is insoluble in water, but soluble in ether, benzene, and certain esters. Paraffin waxes are derived from crude oil and contain between 20 and 40 carbon atoms.
Microcrystalline wax, also known as petrolatum, is used for manifold applications due to its odour, colour, oil content, consistency and oil-binding property.

α-olefin waxes are either synthetically derived from ethylene via Fischer-Tropsch synthesis with a Ziegler-Natta catalyst or via oligomerization of ethylene. Alpha-olefin waxes are most commonly used in lube oil additives, PVC lubricants, candles, oil-drilling chemicals and cosmetics.

Copolymer waxes such as derivates of ethylene vinyl acetate (EVA) and ethylene acrylic acid (EAA) are widely spread in the formulations of coatings, e.g. metallic basecoats.

A wax emulsion / wax dispersion is a stable mixture of one or several waxes in water. As waxes and aqueous liquids are normally immiscible, surfactants and a sophisticated mixing process, e.g. power ultrasound, are required in order to form a stable wax emulsion. In correct terms, a wax emulsion must be called a wax dispersion as waxes are solid at room temperature. But since wax emulsions / dispersions are prepared with molten waxes, the terms “emulsification” and “wax emulsion” are most commonly used for aqueous wax formulations, whilst the term “wax dispersion” mostly describes a solvent based wax formulation.

An emulsion is a liquid in liquid dispersion of two or more immiscible liquids.
An emulsion can occur in various types: w/o, o/w, w/o/w, o/w/o
The type of emulsion (w/o or o/w) can be examined by a dilution test. The emulsion can be only diluted with the continuous / external phase. Another method to identify the emulsion type is by conductivity testing. Ionic o/w emulsions do not conduct, whilst o/w emulsions conduct electric current.
For the use of the CoCl2 filter paper test, a filter paper is impregnated with CoCl2 and dried (blue color). The color of the CoCl2 filter paper turns into pink when an o/w emulsion is added.