The International Maritime Organization (IMO) has implemented new regulations by which marine vessels worldwide are required to use marine fuels with a sulphur content of 0.5%m/m starting from January 2020. These new regulations demand profound changes in the processing of marine fuels: In order to fulfil the new norms for low sulphur fuels, an efficient desulphurization process is required.
Ultrasonically-assisted oxidative desulphurization (UAOD) of liquid hydrocarbon fuels such as gasoline, naphtha, diesel, marine fuel, etc. is a highly efficient and viable method to remove sulphur from large volumes streams of heavy fuels. 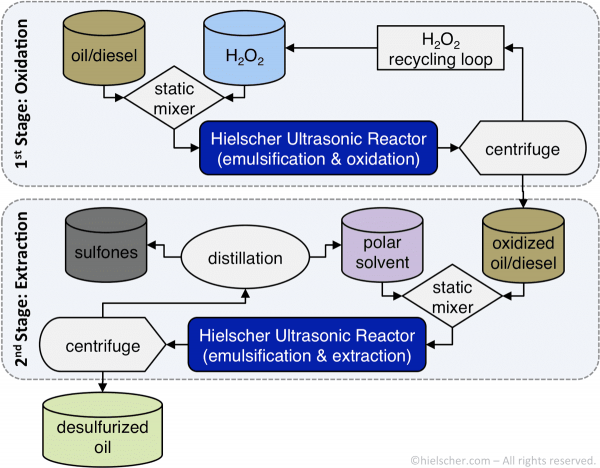 Oxidative Desulphurization (ODS) is an environmental-friendly and economical alternative to hydrodesulphurization (HDS) since oxidized sulfur compounds can be significantly easier separated from the heavy fuel oils. After the oxidative desuphurization step, the extracted sulphur compounds are separated by physical methods e.g. using non-miscible polar solvent and subsequent gravity, adsorption or centrifugal separation. Alternatively, thermal decomposition can be used to remove the oxidized sulfur.
For the oxidative desulphurization reaction, an oxidant (e.g., hydrogen H2O2, sodium chlorite NaClO2, nitrous oxide N2O, sodium periodate NaIO4), a catalyst (e.g., acids) as well as a phase-transfer reagent are required. The phase-transfer reagent helps to promote the heterogeneous reaction between the aqueous and oil phases, which is the rate-limiting step of the ODS reaction. 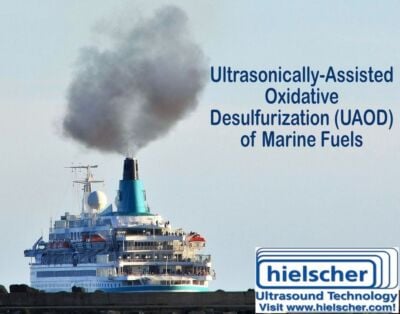 Whilst hydrodesulphurization (HDS) requires higher investment costs, high reaction temperature of up to 400ºC, and high pressure of up to 100atm in the reactors, the ultrasound-assisted oxidative desulfurization process (UAOD) is much more convenient, efficient and greener. The UAOD greatly enhances reactivity of the catalytic sulphur removal and offers at the same time lower operating cost, higher safety and environmental protection. Industrial ultrasonic flow reactor systems increase the desulfurization rate due to a highly effective dispersion and thereby improved reaction kinetics. Since the ultrasonic processing provides nano-scale dispersions, the mass transfer between the different phases in the heterogeneous reaction is drastically increased.

Ultrasonic (acoustic) cavitation increases the reaction rate and mass transfer by the extreme conditions, which are reached within the cavitational hot-spots. During the cavitation bubble implosion, very high temperatures of approx. 5,000K, very fast cooling rates, pressures of approx. 2,000atm and accordingly extreme temperature and pressure differentials are locally reached. The implosion of the cavitation bubble also results in liquid jets of up to 280m/s velocity, which creates very high shear forces. These extraordinary mechanical forces accelerate the oxidation reaction time and increase the sulfur conversion efficiency within seconds.

Whilst mercaptans, thioethers, sulfides and disulfides can be removed by the conventional hydrodesulphurization (HDS) process, for the removal of thiophenes, benzothiophens (BT), dibenzothiophenes (DBT) and 4,6-dimethyldibenzothiophenes (4,6-DMDBT) a more sophisticated method is required. Ultrasonic oxidative desulphurization is highly effective when it comes to the removal of even hardly removable sulfur refractory compounds (e.g., 4,6-dimethyldibenzothiophene and other alkyl-substituted thiophene derivatives). Ebrahimi et al. (2018) report a desulfurization efficiency up to 98.25% using a Hielscher sonoreactor optimized for sulphur removal. Furthermore, the ultrasonically oxidized sulfur compounds can be separated via a basic water wash. 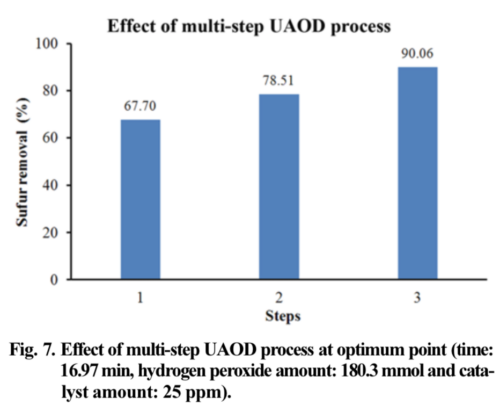 Shayegan et al. 2013 combined ultrasonication (UP400S) with hydrogen peroxide as oxidant, FeSO as catalyst, acetic acid as pH adjuster and methanol as extraction solvent in order to reduce the sulfur amount of gas oil.
The reaction rate constants during oxidative desulphurization can be greatly increased by adding metal ions as catalyst and using sonication. The ultrasound energy can reduce the activation energy of the reaction. The ultrasonication treatment breaks the boundary layer between solid catalysts and reagents and provides a homogeneous mix of catalysts and reagent – improving thereby the reaction kinetics.
The sulphur extraction process is a crucial step during desulphurization with the goal to recover the total volume of desulphurized gas oil. Using a liquid-liquid extraction using methanol as the solvent is a simple extraction process, but to ensure a high efficiency an efficient mixing of the immiscible phases is essential. Only when a maximum interface and subsequently maximum mass transfer take place between the phases, a high extraction rate is achieved. Ultrasonication and the generation of acoustic cavitation provides the intense mixing of the reactant phases and lowers the activation energy of the reaction.

Hielscher Ultrasonics is the market leader of high power ultrasonic systems for demanding applications such as UAOD on industrial scale. High amplitudes of up to 200µm, 24/7 operation under full load and heavy duty, robustness and user-friendliness are key-features of Hielscher ultrasonicators. Ultrasonic systems of different power classes and various accessories such as sonotrodes and flow reactor geometries allow for the most suitable adaption of the ultrasonic system to your specific fuel, processing capacity and environment.
The table below gives you an indication of the approximate processing capacity of our ultrasonicators:

Prajapati et al. (2018): Desulphurization of Crude Oil by Ultrasound Integrated Oxidative Technology. IJSRD – International Journal for Scientific Research & Development Vol. 6, Issue 02, 2018.
Prajapati et al. (2018) describe the benefits of a Hielscher ultrasonic reactor for the ultrasound-assisted oxidative desulfurization (UAOD). UAOD has become an viable alternative technology to the traditional hydrotreating, which is impaired by significant investment and operational costs due to high-pressure, high-temperature hydrodesulphurization equipment, boilers, hydrogen plants, and sulphur recovery units. Ultrasound-assisted oxidative desulfurization permits carrying out the process for deep removal of sulphur under much milder conditions, faster, safer and much more economically.
Ultrasound-assisted oxidative desulfurization (UAOD) process was applied to diesel oil and petroleum product feedstock containing model sulphur compounds (benzothiophene, dibenzothiophene and dimethyldibenzothiophene). The influence of oxidant amount, volume of solvent for the extraction step, time and temperature of ultrasound treatment (UIP1000hdT, 20 kHz, 750 W, operating at 40%) was investigated. Using the optimized conditions for UAOD, sulphur removal up to 99% was achieved for model compounds in petroleum product feedstock using a molar proportion for H2O2:acetic acid:sulfur of 64:300:1, after 9min of ultrasound treatment at 90ºC, followed by extraction with methanol (optimized solvent and oil ratio of 0.36). Using the same reagent amount and 9 min of ultrasound the removal of sulphur was higher than 75% for diesel oil samples.
The Importance of High Ultrasonic Amplitudes
Ultrasonic intensification of commercial-scale oxidative desulfurization of crude oil requires the use of an industrial-size flow-through ultrasonic processor able to maintain high vibration amplitudes of about 80 – 100 microns. The amplitudes directly relate to the intensity of ultrasonic cavitations-generated shear forces and must be maintained at a sufficiently high level for the mixing to be efficient.
The experiments performed by Prajapati et al. show that ultrasonication enhances the desulfurization reaction. Desulfurization efficiency was about 93.2% when high-performance ultrasound is applied.

Shayegan et al. (2013): Sulfur removal of gas oil using ultrasound-assisted catalytic oxidative process and study of its optimum conditions. Korean Journal of Chemical Engineering 30(9), September 2013. 1751-1759.
Ultrasound-assisted oxidative desulfurization process (UAOD) was applied to reduce sulfur compounds of gas oil containing various types of sulfur content. The environmental regulation requires a very deep desulfurization to eliminate the sulfur compounds. UAOD is a promising technology with lower operating cost and higher safety and environmental protection. For the first time the typical phase transfer agent (tetraoctyl-ammonium-bromide) was replaced with isobutanol because using isobutanol is much more economical than TOAB, imposing no contamination. The reaction was carried out at optimal point with various temperatures, in single-, two- and three step-procedures, investigating the effect of gradual increase of H2O2 and TOAB being used instead of isobutanol. Total sulfur concentration in oil phase was analyzed by ASTM-D3120 method. The highest removal of about 90% for gas oil containing 9,500 mg/kg of sulfur was achieved in three-steps during 17 minutes of process at 62±2°C when 180.3 mmol of H2O2 was used and extraction carried out by methanol.

Akbari et al. (2014): Investigation of process variables and intensification effects of ultrasound applied in oxidative desulfurization of model diesel over MoO3/Al2O3 catalyst. Ultrasonics Sonochemistry 21(2), March 2014. 692–705.
A new heterogeneous sonocatalytic system consisting of a MoO3/Al2O3 catalyst and H2O2 combined with ultrasonication was studied to improve and accelerate the oxidation of model sulfur compounds of diesel, resulting in a significant enhancement in the process efficiency. The influence of ultrasound on properties, activity and stability of the catalyst was studied in detail by means of GC-FID, PSD, SEM and BET techniques. Above 98% conversion of DBT in model diesel containing 1000 μg/g sulfur was obtained by new ultrasound-assisted desulfurization at H2O2/sulfur molar ratio of 3, temperature of 318 K and catalyst dosage of 30 g/L after 30 min reaction, contrary to the 55% conversion obtained during the silent process. This improvement was considerably affected by operation parameters and catalyst properties. The effects of main process variables were investigated using response surface methodology in silent process compared to ultrasonication. Ultrasound provided a good dispersion of catalyst and oxidant by breakage of hydrogen bonding and deagglomeration of them in the oil phase. Deposition of impurities on the catalyst surface caused a quick deactivation in silent experiments resulting only 5% of DBT oxidation after 6 cycles of silent reaction by recycled catalyst. Above 95% of DBT was oxidized after 6 ultrasound-assisted cycles showing a great improvement in stability by cleaning the surface during ultrasonication. A considerable particle size reduction was also observed after 3h sonication that could provide more dispersion of catalyst in model fuel.