Liposomes (liposome-lipid based vesicles), transferosomes (ultradeformable liposomes), ethosomes (ultradeformable vesicles with high alcohol content), and niosomes (synthetic vesicles) are microscopic vesicles, which can be artificially prepared as globular carriers into which active molecules can be encapsulated. These vesicles with diameters between 25 and 5000 nm are often used as drug carriers for topical purposes in the pharmaceutical and cosmetic industry, such as drug delivery, genetherapy, and immunization. Ultrasound is a proven method of liposome preparation and the encapsulation of active agents into these vesicles. 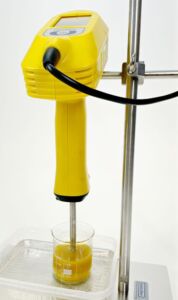 Liposomes are unilamellar, oligolamellar or multilamellar vesicular systems and are composed of the same material as a cell membrane (lipid bilayer). Regarding to their composition and size, one differs between multi-lamellar vesicles (MLV, 0.1-10μm) and unilamellar vesicles, which are distinguished between small (SUV, <100 nm), large (LUV, 100–500 nm) or giant (GUV, ≥1 μm) vesicles.
The composite structure of liposomes consists of phospholipids. Phospholipids have a hydrophilic head group and a hydrophobic tail group, which consists of a long hydrocarbon chain.
The liposome membrane has a very similar composition as the skin barrier, so that they can be easily integrated into the human skin. As the liposomes fusionate with the skin, they can unload the entrapped agents directly to the destination, where the actives can fulfill their functions. Thus, the liposomes create an enhancement of skin penetrability/ permeability for the entrapped pharmaceutical and cosmetical agents. Also liposomes without encapsulated agents, the vacant vesicles, are potent actives for the skin, as the phosphatidylcholin incorporates two essentials, which the human organism cannot produce by itself: linoleic acid and choline. 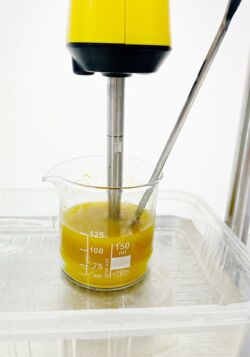 Liposomes are used as biocompatible carriers of drugs, peptides, proteins, plasmic DNA, antisense oligonucleotides or ribozymes, for pharmaceutical, cosmetic, and biochemical purposes. The enormous versatility in particle size and in physical parameters of the lipids affords an attractive potential for constructing tailor-made vehicles for a wide range of applications. (Ulrich 2002)

Liposomes can be formed by the use of ultrasonics. The basic material for liposome preparation are amphilic molecules derived or based on biological membrane lipids. For the formation of small unilamellar vesicles (SUV), the lipid dispersion is sonicated gently – e.g. with the handheld ultrasonic device UP50H (50W, 30kHz), the VialTweeter or the ultrasonic reactor UTR200 – in an ice bath. The duration of such an ultrasonic treatment lasts approx. 5 – 15 minutes. Another method to produce small unilamellar vesicles is the sonication of the multi-lamellar vesicles liposomes.
Dinu-Pirvu et al. (2010) reports the obtaining of transferosomes by sonicating MLVs at room temperature.
Hielscher Ultrasonics offers various ultrasonic devices, sonotrodes and accessories to provide the appropriate sonicator regarding power

Ultrasonic encapsulation of agents into liposomes

Liposomes works as carriers for active agents. Ultrasound is an effective tool to prepare and form the liposomes for the entrapment of active agents. Before encapsulation, the liposomes tend to form clusters due to the surface charge-charge interaction of phospholipid polar heads (Míckova et al. 2008), furthermore they have to be opened. By way of example, Zhu et al. (2003) describe the encapsulation of biotin powder in liposomes by ultrasonication. As the biotin powder was added into the vesicle suspension solution, the solution has been sonicated for approx. 1 hour. After this treatment, biotin was entrapped in the liposomes. 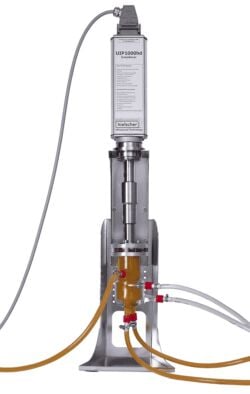 To enhance the nurturing effect of moisturizing or anti-aging cremes, lotions, gels and other cosmeceutical formulations, emulsifier are added to the liposomal dispersions to stabilize higher amounts of lipids. But investigations had shown that the capability of liposomes is generally limited. With the addition of emulsifiers, this effect will appear earlier and the additional emulsifiers cause a weakening on the barrier affinity of phosphatidylcholine. Nanoparticles – composed of phosphatidylcholine and lipids – are the answer to this problem. These nanoparticles are formed by an oil droplet which is covered by a monolayer of phosphatidylcholine. The use of nanoparticles allows formulations which are capable to absorb more lipids and remain stable, so that additional emulsifiers are not needed. 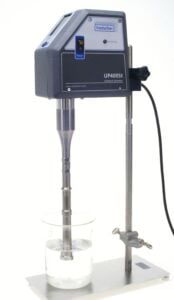 Ultrasonication is a proven method for the production of nanoemulsions and nanodispersions. Highly intensive ultrasound supplies the power needed to disperse a liquid phase (dispersed phase) in small droplets in a second phase (continuous phase). In the dispersing zone, imploding cavitation bubbles cause intensive shock waves in the surrounding liquid and result in the formation of liquid jets of high liquid velocity. In order to stabilize the newly formed droplets of the disperse phase against coalescence, emulsifiers (surface active substances, surfactants) and stabilizers are added to the emulsion. As coalescence of the droplets after disruption influences the final droplet size distribution, efficiently stabilizing emulsifiers are used to maintain the final droplet size distribution at a level that is equal to the distribution immediately after the droplet disruption in the ultrasonic dispersing zone.

Liposomal dispersions, which are based on unsaturated phosphatidylchlorine, lack in stability against oxidation. The stabilization of the dispersion can be achieved by antioxidants, such as by a complex of vitamins C and E.
Ortan et al. (2002) achieved in their study concerning the ultrasonic preparation of Anethum graveolens essential oil in liposomes good results. After sonication, the dimension of liposomes were between 70-150 nm, and for MLV between 230-475 nm; these values were approximately constant also after 2 month, but inceased after 12 month, especially in SUV dispersion (see histograms below). The stability measurement, concerning essential oil loss and size distribution, also showed that liposomal dispersions maintained the content of volatile oil. This suggests that the entrapment of the essential oil in liposomes increased the oil stability.

Hielscher ultrasonic processors are the ideal devices for applications in the cosmetic and pharmaceutical industry. Systems consisting of several ultrasonic processors of up to 16,000 watts each, provide the capacity needed to translate this lab application into an efficient production method to obtain finely dispersed emulsions in continuous flow or in a batch – achieving results comparable to that of today’s best high-pressure homogenizers available, such as the new orifice valve. In addition to this high efficiency in the continuous emulsification, Hielscher ultrasonic devices require very low maintenance and are very easy to operate and to clean. The ultrasound does actually support the cleaning and rinsing. The ultrasonic power is adjustable and can be adapted to particular products and emulsification requirements. Special flow cell reactors meeting the advanced CIP (clean-in-place) and SIP (sterilize-in-place) requirements are available, too.