What are Liposomes and what are their Benefits?

Liposomes are vesicles consisting of an aqueous core enclosed in one or more phospholipid bilayers. Since liposomes have an aqueous core surrounded by a lipid layer and a hydrophilic outer shell, liposomes are water-soluble and can transport water-soluble and fat-soluble compounds in the respective compartments of the vesicle. This makes liposomes a highly effective delivery system for therapeutically active molecules. Liposomes are formed by disrupting biological membranes, a process which is promoted and intensified by ultrasonication. 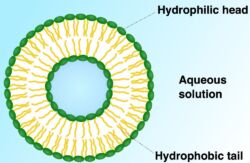 Liposomes are most often composed of phospholipids, especially phosphatidylcholine, but may also include other lipids, such as egg phosphatidylethanolamine, as long as they are compatible with the lipid bilayer structure. Liposomes form spontaneously when phospholipids are hydrated. In the first step – the hydration phase – sonication is used to nano-emulsify the lipids and aqueous phase in order to promote the formation of highly loaded multi-lamellar vesicles (MLVs). Subsequently, sonification can be used to reduce the liposome size if required. To obtain a smaller vesicle size, sonication is applied to disperse and reduce the liposome size to to mono-dispersed large uni-lamellar vesicles (LUVs) or small uni-lamellar vesicles (SUVs).
The ultrasonic technique of liposome formation and liposomal size reduction is reliable, rapid, efficient, easy and safe. The produced liposomes show a high load of bioactive substances, high stability and superior bioavailability. 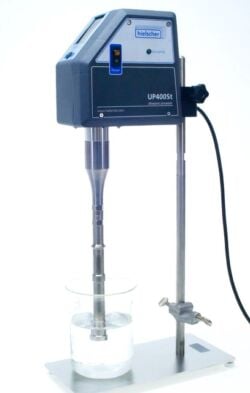 UP400St, a 400 watts powerful ultrasonic homogeniser, for the production nano-liposomes.

Why are ultrasonic cleaning baths not capable to produce high-quality liposomes?

The production of liposomes requires an ultrasonic device that can deliver enough energy to create uniform, nano-sized particles. Homemade liposomes using an ultrasonic jewellery cleaner usually have are generally ineffective since the liposomes prepared exhibit neither the needed nano-size nor do they encapsulate the bioactive nutrients in an effective and long-term stable way. In order to prepare high-quality liposomes, a probe-type ultrasonicator is the preferred technology as the probe (sonotrode) can transmit the intense acoustic energy required for the formation of highly-loaded efficacious liposomes into the medium. In general, liposomes produced with an ultrasonic probe have a particle size distribution of 100-500nm, which is optimal for high loadings and superior bioavailability.
The use of an ultrasonic flow cell reactor allows to prepare the liposomes in an oxygen-free environment to prevent oxidative degradation.
Probe type ultrasonicators provide the required energy to produce liposomes that are:

The list below gives an indication which substances have already successfully encapsulated into liposome formulations using the ultrasonic preparation route.

The nano-enhanced liposomal formulation of bioactive molecules offers a higher absorption rate, superior bioavailability and may enable substances to cross the blood brain barrier.
Alternative lipid-based drug delivery systems are nano-emulsions and lipid-based colloidal carriers such as solid lipid nanoparticles (SLN) and nanostructured lipid carriers (NLC). All of them, nano-emulsions, SLNs and NLCs can be reliably formed and loaded under sonication. 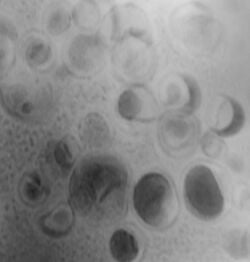 Liposome quality is determined by uniformity in particle size and lamellarity, entrapment efficiency (%EE) / encapsulation load, and stability. Preparation method, processing conditions, raw materials, and storage are important factors that contribute to the quality and thereby potency of liposomal formulations. The SEM image left shows the ultrasonically prepared liposomes loaded with DHA and EPA fatty acids using a Hielscher ultrasonicator UP200S (study and picture: Hadian et al. 2014).
The ultrasonic preparation of liposomes is a reliable technique, which gives a small, uniform liposomal particle size with a high loading of bioactive molecules. Ultrasonic process parameters (such amplitude, total energy, time, pulsation, temperature, pressure) are exactly adjustable. As a non-thermal processing technique, the working principle of sonification is based on purely mechanical shear. Temperature rise in the sonicated liquid is to be explained by the second law of thermodynamics, which states that any energy applied finally is converted into heat. To maintain a stable low temperature of the liposomal medium, Hielscher Ultrasonics provides sophisticated cooling solutions, such as ice baths well as reactors and flow cells with cooling jackets. The results of ultrasonic liposome production are reproducible, which is important for a standardised process and a continuously high product quality.
High quality phospholipids featuring a high percentage of phosphatidylcholine and phosphatidylethanolamine provide a stable liposome shell that prevents the leakage of nutrients. A strong phospholipid shell also protects the encapsulated nutrients against oxidative and thermal degradation. Therefore, a balanced ratio of phosopholipids to aqueous phase to encapsulated nutrients (bioactive molecules) is essential.

Hielscher Ultrasonics’ systems are reliable machines used in the pharmaceutical and supplement production to formulate high-quality liposomes loaded with vitamins, antioxidants, flavonoids, peptides, polyphenols and other bioactive compounds / nutrients. To meet its customers’ demands, Hielscher supplies ultrasonicators from the compact hand-held lab homogenizer and bench-top ultrasonicators to fully industrial ultrasonic systems for the production of high-volumes of liposomal formulations. Ultrasonic liposome formulation can be run as batch or as continuous inline process using an ultrasonic flow-through reactor. A broad range of ultrasonic sonotrodes (probes) and reactor vessels are available to ensure an optimal setup for your liposome production. The robustness of Hielscher’s ultrasonic equipment allows for 24/7 operation at heavy duty and in demanding environments. 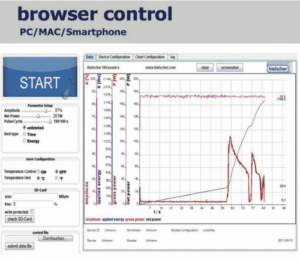 The precise control over all important process parameters such as amplitude, pressure, temperature and sonication time make the ultrasonic process reliable and reproducible. Hielscher Ultrasonics knows of the importance of continuously high product quality and supports supplement and therapeutics manufacturers to implement process standardisation and GMP (Good Manufacturing Practices) by intelligent software and automatic data recording. Our digital ultrasonic homogenizers automatically record all ultrasonic process parameters on a built-in SD-card. Digital touch displays and browser remote control allow for continuous process monitoring and enable to adjust the process parameters precisely whenever required. This facilitates process monitoring and quality control significantly.
The table below gives you an indication of the approximate processing capacity of our ultrasonicators: