Omega-3 fatty acids such as eicosapentaenoic acid (EPA) and docosahexaenoic acid (DHA) play a vital role for the proper functioning of many vital biochemical reactions in the human body. EPA and DHA are mostly found in cold-water fish, cod liver and shell fish. Since not everybody consumes the recommended two servings of fish per week, fish oil is often used in form of dietary supplements. Furthermore, omega-3 fatty acids such as EPA and DHA are used as therapeutics to treat cardiovascular and brain diseases as well as in cancer therapy. In order to improve the bioavailability and absorption rate, ultrasonic encapsulation into liposomes is a widely and successfully used technique.

Ultrasonic encapsulation is a reliable preparation technique to form liposomes with a high load of active substances. Ultrasonic nano-emulsification disrupts the phospholipid bilayers and introduces energy to promote the assembly of amphiphilic vesicles of spherical shape, known as liposomes.
Ultrasonication allows to control the liposome size the ultrasonic preparation process: The liposome size decreases with increasing ultrasound energy. Smaller liposomes offer a higher bioaccessibility and can transport the fatty acid molecules with higher success rate to the target sites since the smaller size facilitates the permeability through cell membranes.
Liposomes are known as potent drug carriers, which can be loaded with lipophilic as well as hydrophilic substances due to the amphiphilic structure of its bilayers. Another advantage of liposomes is the ability to chemically modify liposomes by including lipid-bonded polymers into formulation, so that the uptake of entrapped molecules in targeted tissue is improved and the drug release and thereby its half life time are prolonged. The liposomal encapsulation protects the bioactive compounds also against oxidative degradation, which is an important factor for polyunsaturated fatty acids such as EPA and DHA, which are prone to oxidation.
Hadia et al. (2014) found that ultrasonic encapsulation of DHA and EPA using the probe-type ultrasonicator UP200S gave superior encapsulation efficiency (%EE) with 56.9 ± 5.2% for DHA and 38.6 ± 1.8% for EPA. The %EE for DHA and EPA of liposomes increased significantly using ultrasonication (p value smaller than 0.05; statistically significant values). 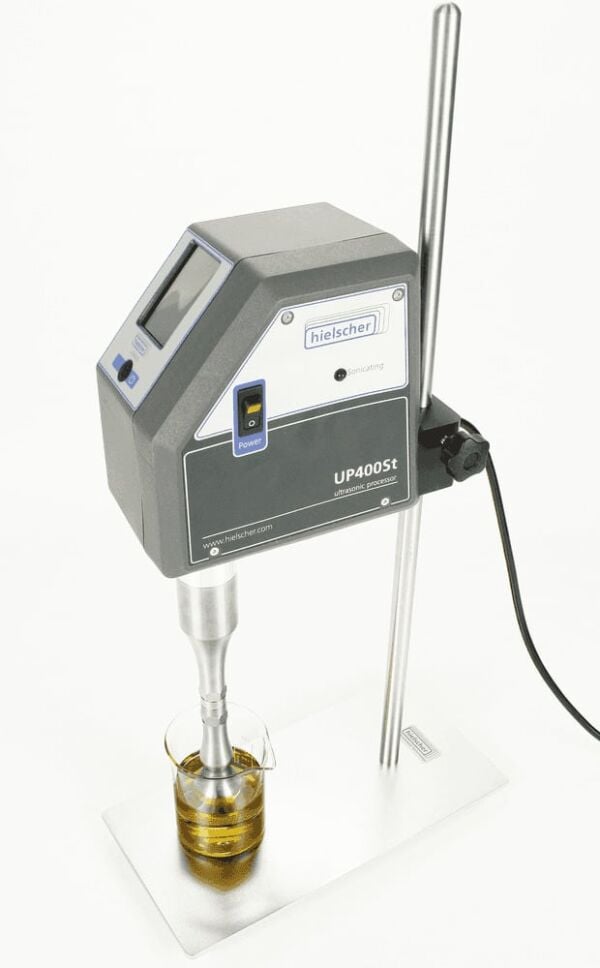 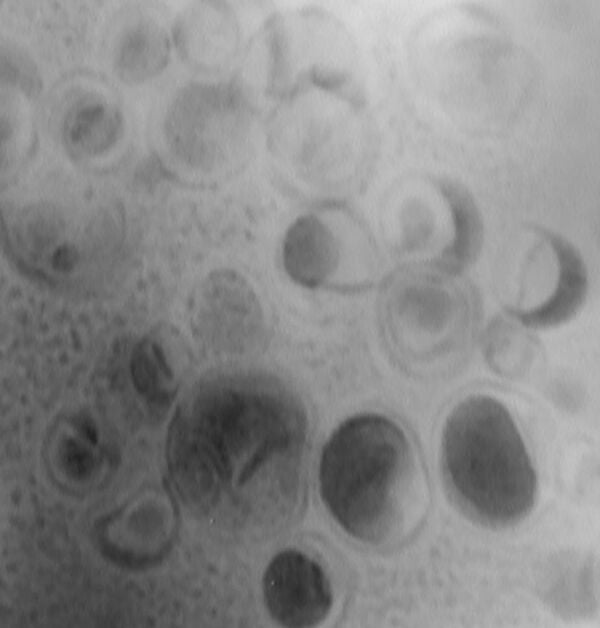 After liposome preparation, stabilisation and storage of liposomal formulations play a crucial role in order to obtain a long-time stable and highly potent carrier formulation.
Critical factors that affect the stability of liposomes include the pH value, storage temperature, and storage container materials.
For a finished-formulation the pH value of approx. 6.5 is considered ideal, because at pH 6.5 lipid hydrolysis is reduced to its lowest rate.
Since liposomes can oxidize and lose their entrapped substance load, a storage temperature at approx. 2-8 °C is recommended. Loaded liposomes must not subjected to freeze and thaw conditions as freeze–thaw stress promotes the leakage of encapsulated bioactive compounds .
Storage container and storage container closures should be carefully selected, since liposomes are not compatible with certain plastic materials. To prevent liposome degradation, injectable liposome suspensions should be stored in glass ampoules rather than stoppered injection vials. Compatibility with the elastomer stoppers of injection vials must be tested. To avoid photooxidation of the lipid composites, storage protected from light, e.g. using a dark glass bottle and storing in a dark place, is very important. For infusible liposome formulations, compatibility of the liposome suspensions with intravenous tubing (made from synthetic plastic) must be ensured. Storage and material compatibility should be specified on the label of the liposome formulation. [cf. Kulkarni and Shaw, 2016]

Hielscher Ultrasonics’ systems are reliable machines used in the pharmaceutical and supplement production to formulate high-quality liposomes loaded with fatty acids, vitamins, antioxidants, peptides, polyphenols and other bioactive compounds. To meet its customers’ demands, Hielscher supplies ultrasonicators from the compact hand-held lab homogeniser and bench-top ultarsonicators to fully industrial ultrasonic systems for the production of high-volumes of liposomal formulations. Ultrasonic liposome formulation can be run as batch or as continuous inline process. A broad range of ultrasonic sonotrodes (probes) and reactor vessels are available to ensure an optimal setup for your liposome production. The robustness of Hielscher’s ultrasonic equipment allows for 24/7 operation at heavy duty and in demanding environments.
The table below gives you an indication of the approximate processing capacity of our ultrasonicators:

A liposome is a spherical vesicle having at least one lipid bilayer. Liposomes are known to be excellent drug carriers and are used as a vehicle to administer nutrients, supplements and pharmaceutical drugs into the targeted tissue.
Liposomes are commonly made from phospholipids, especially phosphatidylcholine, but may also include other lipids, such as egg phosphatidylethanolamine, so long as they are compatible with lipid bilayer structure.
A liposome consists of an aqueous core, which is surrounded by a hydrophobic membrane, in the form of a lipid bilayer; hydrophilic solutes dissolved in the core are entrapped and cannot readily pass through the bilayer. Hydrophobic molecules can be stored into the bilayer. A liposome can be hence loaded with hydrophobic and/or hydrophilic molecules. To deliver the molecules to a target site, the lipid bilayer can fuse with other bilayers such as the cell membrane, delivering thereby the substances encapsulated in the liposome into cells.
Since the blood stream of mammalians are water-based, the liposomes transport the hydrophobic substance efficiently through the body to the targeted cells. Liposomes are therefore used to increase the bioavailability of water-insoluble molecules (e.g. CBD, curcumin, drug molecules).
Liposomes are successfully prepared by ultrasonic nano-emulsification and encapsulation. 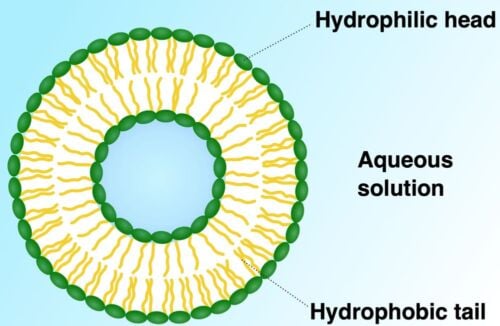 Structure of a liposome: Aqueous core and phospholipid bilayer with hydrophilic heads and hydrophobic/lipophilic tails.

Omega-3 (ω-3) and omega-6 (ω-6) fatty acids are both polyunsaturated fatty acids (PUFAs) and contribute to numerous functions in the human body. Especially omega-3 fatty acids are known for their anti-inflammatory and health-promoting characteristics.
Eicosapentaenoic acid or EPA (20:5n-3) acts as a precursor for prostaglandin-3 (which inhibits platelet aggregation), thromboxane-3, and leukotriene-5 eicosanoids and plays a crucial role for cardiovascular and brain health.
Docosahexaenoic acid or DHA (22:6n-3) is major structural component of the mammalian central nervous system. DHA is the most abundant omega−3 fatty acid in the brain and retina and both organs, the brain and retina rely on dietary intake of DHA in order to function properly. DHA supports a broad range of cell membrane and cell signaling properties, particularly in the grey matter of the brain as well as in the outer segments of the retinal photoreceptor cells, which are rich in membranes.

Some of the food sources of ω-3 are fish (e.g. cold-water fish such as salmon, sardines, mackerel), cod liver oil, shellfish, caviar, marine algae, seaweed oil, flaxseed (linseed), hemp seed, chia seeds, and walnuts.
The standard western diet typically includes high amounts of omega-6 (ω-6) fatty acids, since foods like grains, vegetable seed oils, poultry, and eggs are rich in omega-6 lipids. On the other hand, omega-3 (ω-3) fatty acids, which are mainly found in cold-water fish, are consumed in significantly lower amounts, so that the omega-3:omega-6 ratio is often completely unbalanced.
Therefore, the use of omega-3 dietary supplements is often recommended by medical doctors and health care practitioners.