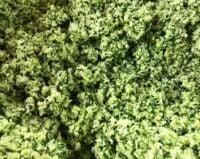 Pectin is a natural complex polysaccharide (heteropolysaccharide) found in particular in the cell walls of fruits, especially in citrus fruits and apple pomace. High pectin contents are found in the fruit peels of both apple and citrus fruits. Apple pomace contains 10-15% of pectin on a dry matter basis while citrus peel contains 20-30%. Pectins are biocompatible, biodegradable and renewable and show great gelling and thickening properties, which makes them a highly valued additive. Pectins are widely used in food, cosmetics and pharmaceutical products as rheology modifier such as emulsifier, gelling agent, glazing agent, stabilizer, and thickener.
Conventional pectin extraction for industrial applications is performed using an acid-catalyzed processes (using nitric, hydrochloric or sulphuric acid). Acid-catalysed extraction is the most frequented process in industrial pectin production, since the other extraction techniques such as direct boiling (60ºC-100ºC) for up to 24hrs and low pH (1.0-3.0) are slow and low in yield and can cause thermal degradation of the fiber extracted and the pectin yield is sometimes limited by the process conditions. However, the acid-catalyzed extraction comes with its disadvantages, too: The harsh acidic treatment causes depolymerization and deesterification of the pectin chains, which affects the pectin quality negatively. The production of large volumes of acidic effluent require post-processing and expensive recycling treatment, which makes the process an environmental burden. 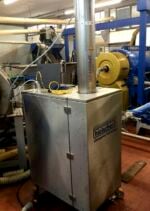 Ultrasonic extraction is a mild, non-thermal treatment, which is applied to manifold food processes. In regards to the extraction of pectins from fruits and vegetables, sonication produces pectin of high quality. Ultrasonically extracted pectins excel by their anhydrouronic acid, methoxyl and calcium pectate contents as well as its degree of esterification. The mild conditions of the ultrasonic extraction prevent a thermal degradation of the heat-sensitive pectins.
Pectin quality and purity can vary depending on anhydrogalacturonic acid, degree of esterification, ash content of extracted pectin. The pectin with high molecular weight and low ash (below 10%) content with high anhydrogalacturonic acid (above 65%) are known as good quality pectin. Since the intensity of the ultrasonic treatment can be very precisely controlled, the properties of the pectin extract can be influenced by adjusting amplitude, extraction temperature, pressure, retention time and solvent.

Hielscher Ultrasonics is your partner for extraction processes from botanicals. Whether you want extract small amounts for research and analysis or process large volumes for commercial production, we have the suitable ultrasonic extractor for you. Our ultrasonic lab processors as well as our bench-top and industrial ultrasonicators are robust, easy-to-use and built for 24/7 operation under full load. A broad range of accessories such as sonotrodes (ultrasonic probes / horns) with different sizes and shapes, flow cells and reactors and boosters allow for the optimal setup for you specific extraction process.
All digital ultrasonic machines are equipped with a colored touch display, integrated SD Card for automatic data protocolling, and browser remote control for comprehensive process monitoring. With Hielscher’s sophisticated ultrasonic systems, a high process standardization and quality control is made simple.
Contact us today to discuss the requirements of your extraction process! We will be glad to assist you with our long-term experience in botanical extractions!
The table below gives you an indication of the approximate processing capacity of our ultrasonicators:

Prickly Pear Cladodes: Ultrasonic assisted extraction (UAE) of pectin from Opuntia ficus indica (OFI) cladodes after mucilage removal was attempted using the response surface methodology. The process variables were optimized by the isovariant central composite design in order to improve the pectin extraction yield. The optimum condition obtained was: sonication time 70 min, temperature 70, pH 1.5 and the water-material ratio 30 ml/g. This condition was validated and the performance of experimental extraction was 18.14% ± 1.41%, which was closely linked to the predicted value (19.06%). Thus, ultrasonic extraction present a promising alternative to conventional extraction process thanks to its high efficiency which was achieved in less time and at lower temperatures. The pectin extracted by ultrasonic extraction from OFI cladodes (UAEPC) has a low degree of esterification, high uronic acid content, important functional properties and good anti-radical activity. These results are in favor of the use of UAEPC as potential additive in food industry. [Bayar et al. 2017]

Grape Pomace: In the research paper “Ultrasound-assisted extraction of pectins from grape pomace using citric acid: A response surface methodology approach“, sonication is used to extract pectins from grape pomace with citric acid as the extracting agent. According to the Response Surface Methodology, the highest pectin yield (∼32.3%) can be achieved when the ultrasonic extraction process is carried out at 75ºC for 60 min using a citric acid solution of pH 2.0. These pectic polysaccharides, composed mainly by galacturonic acid units (∼97% of total sugars), have an average molecular weight of 163.9kDa and a degree of esterification (DE) of 55.2%.
The surface morphology of sonicated grape pomace shows that sonication plays an important role in breaking up the vegetal tissue and enhancing extraction yields. The yield obtained after ultrasonic extraction of pectins using the optimal conditions (75°C, 60 min, pH 2.0) was 20% higher than the yield obtained when the extraction was carried out applying the same conditions of temperature, time and pH, but without ultrasonic assistance. In addition, pectins from ultrasonic extraction also exhibited a higher average molecular weight. [Minjares-Fuentes et al. 2014] 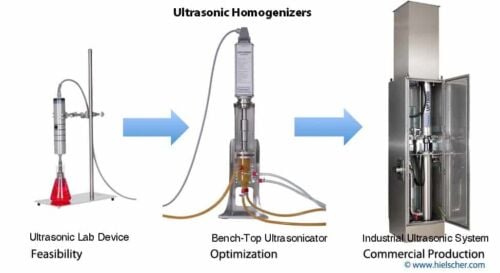 From feasibility testing to process optimization and industrial installation – Hielscher Ultrasonics is your partner for successful ultrasonic processes!

Pectin is a naturally occurring heteropolysaccharide, which is mainly found in fruits such as apple pomace and citrus fruits. Pectins, also known as pectic polysaccharides, are rich in galacturonic acid. Within the pectic group, several different polysaccharides have been identified. Homogalacturonans are linear chains of α-(1–4)-linked D-galacturonic acid. Substituted galacturonans are characterized by the presence of saccharide appendant residues (such as D-xylose or D-apiose in the respective cases of xylogalacturonan and apiogalacturonan) branching from a backbone of D-galacturonic acid residues. Rhamnogalacturonan I pectins (RG-I) contain a backbone of the repeating disaccharide: 4)-α-D-galacturonic acid-(1,2)-α-L-rhamnose-(1. Many rhamnose residues have sidechains of various neutral sugars. The neutral sugars are mainly D-galactose, L-arabinose and D-xylose. The types and proportions of neutral sugars vary with the pectin’s origin.
Another structural type of pectin is rhamnogalacturonan II (RG-II), which is a complex, highly branched polysaccharide and less frequently found in nature. The backbone of rhamnogalacturonan II consists exclusively of D-galacturonic acid units. Isolated pectin has a molecular weight of typically 60,000–130,000 g/mol, varying with origin and extraction conditions.
Pectins are an important additive with manifold applications in foods, pharmaceuticals, as well as in other industries. The use of pectins is based on its high capability to form gel in the presence of Ca2+ ions or a solute at low pH. There are two forms of pectins: low-methoxyl pectin (LMP) and high-methoxyl pectin (HMP). The two types of pectin are distinguished by their degree of methylation (DM). In dependence on methylathion, pectin can be either high methoxy pectin (DM>50) or low methoxy pectin (DM<50). High methoxy pectin is characterized by its capability to form gels in an acidic medium (pH 2.0-3.5) under the premise that sucrose at a concentration of at least 55 wt% or higher is present. Low methoxy pectin can form gels over a larger pH range (2.0–6.0) in the presence of a divalent ion, such as calcium.
Concerning the gelation of high-methoxyl pectin, the cross-linking of pectin molecules occurs due hydrogen bonds and hydrophobic interactions between the molecules. With low-methoxyl pectin, gelation is obtained from the ionic linkage via calcium bridges between two carboxyl groups belonging to two different chains in close proximity of each other.
Factors such pH, presence of other solutes, molecular size, degree of methoxylation, number and position of side chains, and charge density on the molecule influence the gelation properties of pectin. Two types of pectins are distinguished regarding to its solubility. There is water-soluble or free pectin and water-insoluble pectin. Pectin’s water-solubility is related to its degree of polymerization and the amount and position of methoxyl groups. In general, pectin’s water-solubility increases with decreasing molecular weight and increases in esterified carboxyl groups. However, pH, temperature, and the type of solute present influence solubility, too.
The quality if commercially used pectin is usually more determined by its dispersability than by its absolute solubility. When dry powdered pectin is added to water, it is known to form so-called “fish-eyes”. These fish-eyes are clumps formed due to the rapid hydration of the powder. “Fish-eye” clumps have a dry, un-wetted pectin core, which is coated with a highly hydrated outer-layer of wet powder. Such clumps are hard to wet properly and they disperse only very slow.

In the food industry, pectin is added to marmalades, fruit spreads, jams, jellies, beverages, sauces, frozen foods, confectionery, and bakery products. Pectin is used in confectionery jellies to give a good gel structure, a clean bite and to confer a good flavour release. Pectin is also used to stabilize acidic protein drinks, such as drinking yogurt, to improve texture, mouth-feel and pulp stability in juice based drinks and as a fat substitute in baked goods. For calorie-reduced / low-calorie, pectins are added as a fat and/or sugar replacement.
In the pharmaceutical industry, it is used to reduce blood cholesterol levels and gastrointestinal disorders.
Other industrial applications of pectin include its application in edible films, as an emulsion stabilizer for water/oil emulsions, as rheology modifier and plasticizer, as sizing agent for paper and textiles etc.

Although pectin can be found in the cell walls of most plants, apple pomace and orange peel are the two major sources of commercially produced pectins since their pectins are of major quality. Other sources show often poor gelling behavior. In fruits, besides apple and citrus, peaches, apricots, pears, guavas, quince, plums, and gooseberries are known for their high amount of pectin. Amongst vegetables, tomatoes, carrots, and potatoes are known for their high pectin contents.

Millions of tons of tomatoes (Lycopersicon esculentum Mill.) are processed yearly to produce products such as tomato juice, paste, purée, ketchup, sauce and salsa, resulting in generation of large quantities of wastes. Tomato waste, obtained after pressing of tomato is composed of 33% seed, 27% skin, and 40% pulp, while dried tomato pomace contains 44% seed and 56% pulp and skin. Tomato waste is a great source to produce pectins.