Ultrasonication is widely employed for dispersing nano materials such as monodispersed nanoparticles and nanotubes, since ultrasonics enhances separation and functionalization of the particles and tubes greatly.
Ultrasonic dispersing equipment creates cavitation and high shear forces to disrupt, deagglomerate, detangle and disperse nano particles and nanotubes. The intensity of sonication can be precisely adjusted and controlled so that the ultrasonic processing parameters are adapted perfectly, taking concentration, agglomeration, and alignment/entanglement of the nano material into account. Thereby, nano materials can be optimally processed regarding their specific material’s requirements. Optimal dispersion conditions due to individually adjusted ultrasonic process parameters result in a high-quality final rubber nanocomposite with superior reinforcing characteristics of the nano-additives and -fillers.
Due to the superior dispersion quality of ultrasonics and the thereby achieved uniform dispersion, a very low filler loading is sufficient to obtain excellent material characteristics. 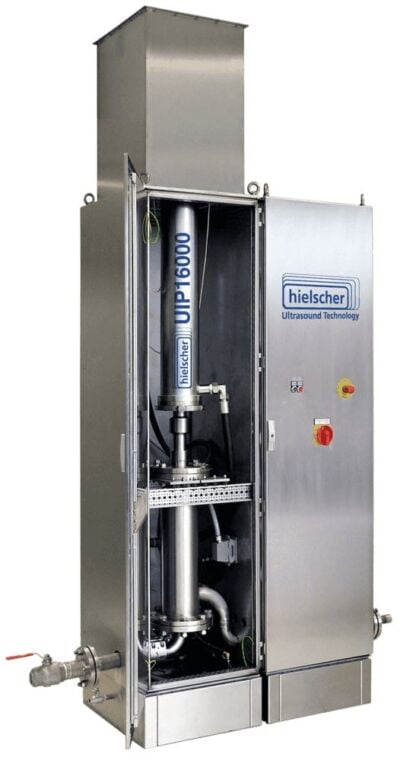 Carbon black is one of the most important filler in rubbers, especially for tires, to give the rubber material abrasion resistance and tensile strength. Carbon black particles are heavily prone to form aggregates which are difficult to disperse homogeneously. Carbon black is commonly used in paints, enamels, printing inks, nylon and plastic colorings, latex mixtures, wax mixtures, photo coatings, and more.
Ultrasonic dispersion allows to deagglomerate and blend uniformly with a very high monodispersity of the particles.
Click here to learn more about ultrasonic dispersion for reinforced composites!

Ultrasonic homogenizers are powerful dispersing systems which can be precisely controlled and adjusted to the process and material requirements. The precise control of the ultrasonic process parameters is especially important for dispersing nanotubes such as MWNTs or SWNTs since the nanotubes must be detangled into single tubes without being damaged (e.g. scission). Undamaged nanotubes offer a high aspect ratio (up to 132,000,000:1) so that they give exceptional strength and stiffness when formulated into a composite. Powerful, precisely adjusted sonication overcomes the Van der Waals forces and disperses and detangles the nanotubes resulting in a high performance rubber material with exceptional tensile strength and elastic modulus.
Furthermore, ultrasonic functionalization is used to modify carbon nanotubes in order to attain desired properties that can be used in manifold applications. 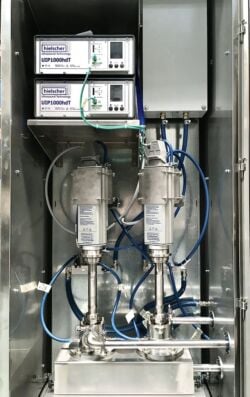 Ultrasonicators for the continuous dispersion of nanomaterials, carbon black, or activated charcoal. 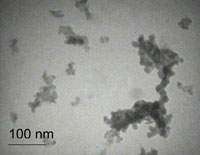 Sonication has been proven to disperse many other nanoparticulated materials to improve modulus, tensile strength, and fatigue properties of rubber composites. Since particle size, shape, surface area and surface activity of fillers and reinforcing additives are crucial for their performance, powerful and reliable ultrasonic dispersers are one of the most frequently used methods to formulate micro- and nano-sized particles into rubber products.
Typical additives and fillers, which are incorporated by sonication as uniformly distributed or monodispersed particles in rubber matrices, are calcium carbonate, kaolin clay, fumed silica, precipitated silica, graphite oxide, graphene, mica, talc, barite, wollastonite, precipitated silicates, fumed silica and diatomite.
When oleic acid-functionalized TiO2 nanoparticles are ultrasonically dispersed in styrene-butadiene rubber, even a very small amount of the oleic-SiO2 results in significantly improved modulus, tensile strength, and fatigue properties and functions as protective agent against photo and thermo degradation.

Hielscher Ultrasonics offers a wide product range of ultrasonic equipment – from smaller bench-top systems for feasibility test up to heavy-duty industrial ultrasonicator units with up to 16kW per unit. Power, reliability, precise controllability as well as their robustness make Hielscher’s ultrasonic dispersing systems the “work horse” in the production line of micron- and nano-particulated formulations. Our ultrasonicators are capable to process aqueous and solvent-based dispersions up to high viscosities (up to 10,000cp) easily. Various sonotrodes (ultrasonic horns), boosters (intensifier/decreaser), flow cell geometries and other accessories allow for the optimal adaption of the ultrasonic disperser to the product and its process requirements.
Hielscher Ultrasonics’ industrial ultrasonic processors can deliver very high amplitudes. Amplitudes of up to 200µm can be continuously run in 24/7 operation promptly. For even higher amplitudes, customized ultrasonic sonotrodes are available. The robustness of Hielscher’s ultrasonic equipment allows for 24/7 operation at heavy duty and in demanding environments. Hielscher`s ultrasonic dispersers are installed worldwide for large-scale commercial production. 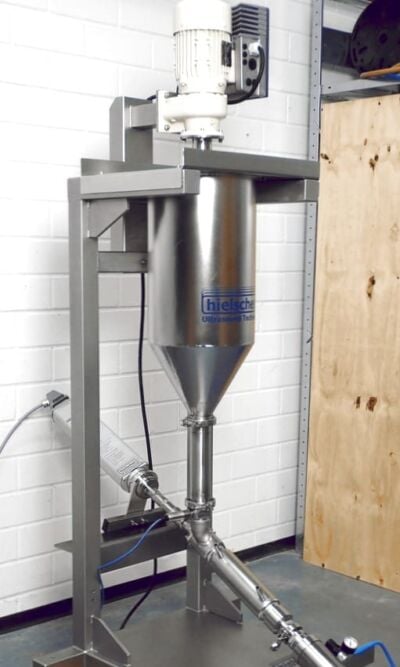 A synthetic rubber is any artificial elastomer. Synthetic rubbers are mainly polymers synthesised from petroleum byproducts and are made, like other polymers, from various petroleum-based monomers. The most prevalent synthetic rubber is styrene-butadiene rubber (SBR) derived from the copolymerization of styrene and 1,3-butadiene. Other synthetic rubbers are prepared from isoprene (2-methyl-1,3-butadiene), chloroprene (2-chloro-1,3-butadiene), and isobutylene (methylpropene) with a small percentage of isoprene for cross-linking. These and other monomers can be mixed in various proportions to be copolymerized to produce products with a range of physical, mechanical, and chemical properties. The monomers can be produced pure and the addition of impurities or additives can be controlled by design to give optimal properties. Polymerization of pure monomers can be better controlled to give a desired proportion of cis and trans double bonds.
Synthetic rubber, like natural rubber, is widely used in the automotive industry for tires, door and window profiles, hoses, belts, matting, and flooring.

Natural rubber is also known as India rubber or caoutchouc. Natural rubber is classified as elastomer and consists mainly of polymers of the organic compound poly-cis-isoprene and water. It contains traces of impurities like protein, dirt etc. Natural rubber, which is derived as latex from the rubber tree Hevea Brasiliensis, shows excellent mechanical properties. However in comparison to synthetic rubbers, natural rubber has a lower material performance especially regarding to its thermal stability and its compatibility with petroleum products. Natural rubber has a wide range of applications, either alone or in combination with other materials. Mostly, it is used due to its large stretch ratio, high resilience, and its extremely high watertightness. The melting point of rubber is at approximately 180°C (356°F).

The table below gives an overview over the various types of rubber:

Styrene-butadiene or styrene-butadiene rubber (SBR) describes synthetic rubbers, which are derived from styrene and butadiene. Reinforced styrene-butadiene characterized by its high abrasion resistance and good anti-aging properties. The ratio between styrene and butadiene determines the polymer properties: by a high styrene content, the rubbers becomes harder and less rubbery.
The limitations of non-reinforced SBR are caused by its low strength without reinforcement, low resilience, low tear strength (particularly at high temperatures), and poor tack. Therefore, reinforcing agents and fillers are required to improve SBR properties. For instance, carbon black fillers are used to strength and abrasion-resistance heavily.

Styrene (C8H8) is known under various terms such as ethenylbenzene, vinylbenzene, phenylethene, phenylethylene, cinnamene, styrol, diarex HF 77, styrolene, and styropol. It is an organic compound with the chemical formula C6H5CH=CH2. Styrene is the precursor to polystyrene and several copolymers.
It is a benzene derivative and appears as a colorless oily liquid, which evaporates easily. Styrene has a sweet smell, which turns at high concentrations in a less pleasant odor.
In the presence of a vinyl group, styrene forms a polymer. Styrene-based polymers are commercially produced to obtain products such as polystyrene, ABS, styrene-butadiene (SBR) rubber, styrene-butadiene latex, SIS (styrene-isoprene-styrene), S-EB-S (styrene-ethylene/butylene-styrene), styrene-divinylbenzene (S-DVB), styrene-acrylonitrile resin (SAN), and unsaturated polyesters that are used in resins and thermosetting compounds. These materials are important components for the production of rubber, plastic, insulation, fiberglass, pipes, automobile and boat parts, food containers, and carpet backing.

Rubber has many material characteristics such as strength, long lasting, water resistance and heat resistance. Those properties make rubber very versatile so that it is used in many industries. The main use of rubber is in the automotive industry, mainly for tire production. Further characteristics as its non-slippery, softness, durability, and resilience make rubber a highly frequented composite used for the production of shoes, floorings, medical and healthcare supplies, household products, toys, sports articles and many of other rubber products.

Nano-sized fillers and additives in rubbers act as reinforcing and protective agents to improve tensile strength, abrasion resistance, tear resistance, hysteresis and to preserve against photo- and thermal degradation of the rubber.

Carbon black is a form of paracrystalline carbon with chemisorbed oxygen complexes (such as carboxylic, quinonic, lactonic, phenolic groups and others) attached to its surface. These surface oxygen groups are usually grouped under the term “volatile complexes”. Due to this volatile content, carbon black is a non-conductive material. With carbon-oxygen complexes functionalized carbon black particles are easier to disperse.
The high surface-area-to-volume ratio of carbon black makes it a common reinforcing filler. Almost all rubber products, for which tensile strength and abrasion resistance are essential, use carbon black. Precipitated or fumed silica is used as a substitute for carbon black, when reinforcment of rubber is required but the black color should be avoided. However, silica-based fillers are gaining market share in automotive tires, too, because the use of silica fillers results in a lower rolling loss compared to carbon black-filled tires.
The table below gives an overview over carbonblack types used in tires

Graphene oxide dispersed in SBR results in high tensile strength and tear strength as well in outstanding wear resistance and low-rolling resistance, which are important material properties for the tire manufacturing. Graphene oxide-silica reinforced SBR offers a competitive alternative for an environmental-friendly tire production as well as for the production of high performance rubber composites. Graphene and graphene oxide can be successfully, reliably and easily exfoliated under sonication. Click here to learn more about the ultrasonic fabrication of graphene!