Carbon nanotubes are strong and flexible but very cohesive. They are difficult to disperse into liquids, such as water, ethanol, oil, polymer or epoxy resin. Ultrasound is an effective method to obtain discrete – single-dispersed – carbon nanotubes.

Carbon nanotubes (CNT) are used in adhesives, coatings and polymers and as electrically conductive fillers in plastics to dissipate static charges in electrical equipment and in electrostatically paintable automobile body panels. By the use of nanotubes, polymers can be made more resistant against temperatures, harsh chemicals, corrosive environments, extreme pressures and abrasion. There are two categories of carbon nanotubes: Single-wall nanotubes (SWNT) and multi-wall nanotubes (MWNT). 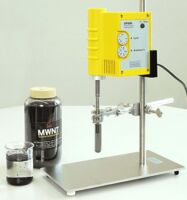 Carbon nanotubes are generally available as dry material, e.g. from companies, such as SES Research or CNT Co., Ltd. A simple, reliable and scalable process for deagglomeration is needed, in order to utilize the nanotubes to their maximum potential. For liquids of up to 100,000cP ultrasound is a very effective technology for the dispersing of nanotubes in water, oil or polymers at low or high concentrations. The liquid jet streams resulting from ultrasonic cavitation, overcome the bonding forces between the nanotubes, and separate the tubes. Because of the ultrasonically generated shear forces and micro turbulences ultrasound can assist in the surface coating and chemical reaction of nanotubes with other materials, too. 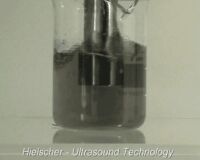 Generally, a coarse nanotube-dispersion is first premixed by a standard stirrer and then homogenized in the ultrasonic flow cell reactor. The video below shows a lab trial (batch sonication using a UP400S) dispersing multiwall carbon nanotubes in water at low concentration. Because of the chemical nature of carbon the dispersing behavior of nanotubes in water is rather difficult. As shown in the video, it can be easily demonstrated that ultrasonication is capable to disperse nanotubes effectively. 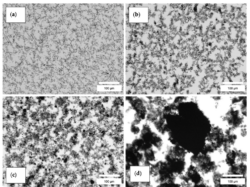 A major problem for processing and manipulation of SWNTs is the inherent insolubility of the tubes in common organic solvents and water. Functionalization of the nanotube side wall or open ends to create an appropriate interface between the SWNTs and the solvent mostly lead to partial exfoliation of the SWNT ropes, only.
As a result, the SWNTs are typically dispersed as bundles rather than fully isolated individual objects. When too harsh conditions are employed during dispersion, the SWNTs are shortened to lengths between 80 and 200nm. Although this is useful for certain tests, this length is too small for most practical applications, such as semiconducting or reinforcing SWNTs. Controlled, mild ultrasonic treatment (e.g. by UP200Ht with 40mm sonotrode) is a effective procedure to prepare aqueous dispersions of long individual SWNTs. Sequences of mild ultrasonication minimize the shortening and allow maximal preservation of structural and electronic properties.

Purification of SWNT by Polymer-Assisted Ultrasonication 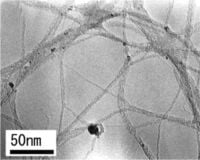 It is difficult to study the chemical modification of SWNTs at the molecular level, because is difficult to obtain pure SWNTs. As-grown SWNTs contain many impurities, such as metal particles and amorphous carbons. Ultrasonication of SWNTs in a monochlorobenzene (MCB) solution of poly(methyl methacrylate) PMMA followed by filtration is an effective way to purify SWNTs. This polymer-assisted purification method allows to remove impurities from as-grown SWNTs effectively. (Yudasaka et al.) Accurate control of the ultrasonication amplitude allows to limit damages to the SWNTs.

Hielscher’s broad range of ultrasonic devices and accessories for the efficient dispersing of nanotubes.