To exploit the exceptional functionalities of carbon nanotubes (CNTs), they must be homogeneously dispersed.
Ultrasonic dispersers are the most common tool to distribute CNTs into aqueous and solvent-based suspensions.
The ultrasonic dispersing technology creates sufficiently high shear energy to achieve a complete separation of CNTs without damaging them. 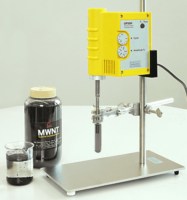 Carbon nanotubes (CNTs) have a very high aspect ratio and exhibit a low density as well as an enormous surface area (several hundred m2/g), which gives them unique properties such as very high tensile strength, stiffness, and toughness and a very high electrical and thermal conductivity. Due to Van der Waals forces, which attract the single carbon nanotubes (CNTs) to each other, CNTs arrange normally in bundles or skeins. These intermolecular forces of attraction are based on a π-bond stacking phenomenon between adjacent nanotubes known as π-stacking. To derive the full benefit from carbon nanotubes, these agglomerates must be disentangled and and the CNTs must be distributed evenly in a homogeneous dispersion. Intense ultrasonication creates acoustic cavitation in liquids. The thereby generated local shear stress breaks CNT aggregates and disperses them uniformly in a homogeneous suspension. The ultrasonic dispersing technology creates sufficiently high shear energy to achieve a complete separation of CNTs without damaging them. Even for the sensitive SWNTs sonication is successfully applied to disentangle them individually. Ultrasonication just delivers a sufficient stress level to separate the SWNT aggregates without causing much fracture to individual nanotubes (Huang, Terentjev 2012). 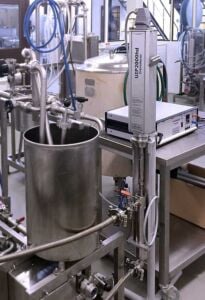 Hielscher Ultrasonics supplies powerful and reliable ultrasonic equipment for the efficient dispersion of CNTs. Whether you need to prepare small CNT samples for analysis and R&D or you have to manufacture large industrial lots of bulk dispersions, Hielscher’s product range offers the ideal ultrasonic system for your requirements. From 50W ultrasonicators for lab up to 16kW industrial ultrasonic units for commercial manufacturing, Hielscher Ultrasonics has you covered.
To produce high-quality carbon nanotube dispersions, the process parameters must be well controlled. Amplitude, temperature, pressure and retention time are the most critical parameters for a even CNT distribution. Hielscher’s ultrasonicators not only allow for the precise control of each parameter, all process parameters are automatically recorded on the integrated SD card of Hielscher’s digital ultrasonic systems. The protocol of each sonication process helps to ensure reproducible results and consistent quality. Via remote browser control the user can operate and monitor the ultrasonic device without being on the location of the ultrasonic system.
Since single-walled carbon nanotubes (SWNTs) and multi-walled carbon nanotubes (MWNTs) as well as the selected aqueous or solvent medium require specific processing intensities, the ultrasonic amplitude is a key factor when it comes to the final product. Hielscher Ultrasonics’ industrial ultrasonic processors can deliver very high as well as very mild amplitudes. Establish the ideal amplitude for your process requirements. Even amplitudes of up to 200µm can be easily continuously run in 24/7 operation. For even higher amplitudes, customized ultrasonic sonotrodes are available. The robustness of Hielscher’s ultrasonic equipment allows for 24/7 operation at heavy duty and in demanding environments.
Our customers are satisfied by the outstanding robustness and reliability of Hielscher Ultrasonic’s systems. The installation in fields of heavy-duty applications, demanding environments and 24/7 operation ensure efficient and economical processing. Ultrasonic process intensification reduces processing time and achieves better results, i.e. higher quality, higher yields, innovative products.
The table below gives you an indication of the approximate processing capacity of our ultrasonicators:

Carbon nanotubes (CNTs) are part of a special class of one-dimensional carbon materials, exhibiting exceptional mechanical, electrical, thermal, and optical properties. They are a major component used in the development and production of advanced nanomaterials such as nano-composites, reinforced polymers etc. and are therefore used in state-of-the-art technologies. CNTs expose a very high tensile strength, superior thermal transfer properties, low-band gaps and optimal chemical and physical stability, which makes nanotubes an promising additive for manifold materials.
Depending on their structure, CNTS are distinguished into single-walled carbon nanotubes (SWNTs), double-walled carbon nanotubes (DWCNTs), and multi-walled carbon nanotubes (MWNTs).
SWNTs are hollow, long cylindrical tubes made from a one atom-thick carbon wall. The atomic sheet of carbons is arranged in a honeycomb lattice. Often, they are conceptually compared to rolled-up sheets of single-layer graphite or graphene.
DWCNTs are consists of two single-walled nanotubes, with one nested within the other.
MWNTs are a CNT form, where multiple single-walled carbon nanotubes are nested inside one another. Since their diameter ranges between 3–30 nm and as they can grow several cm long, their aspect ratio can vary between 10 and ten million. Compared to carbon nanofibers, MWNTs have a different wall structure, a smaller outer diameter, and a hollow interior. Commonly used industrially available typed of MWNTs are e.g. Baytubes® C150P , Nanocyl® NC7000, Arkema Graphistrength® C100, and FutureCarbon CNT-MW.
Synthesis of CNTs: CNTs can be produced by plasma based synthesis method or arc discharge evaporation method, laser ablation method, thermal synthesis process, chemical vapor deposition (CVD) or plasma-enhanced chemical vapor deposition.
Functionalization of CNTs: To improve the characteristics of carbon nanotubes and make them thereby more suitable to a specific application, CNTs are often functionalized, e.g. by adding carboxylic acid (-COOH) or hydroxyl (-OH) groups.

A few solvents such as super acids, ionic liquids, and N-cyclohexyl-2-pyrrolidnone are capable to prepare relatively high-concentration dispersions of CNTs, whilst the most common solvents for nanotubes, such as N-methyl-2-pyrrolidone (NMP), dimethylformamide (DMF), and 1,2-dichrolobenzene, can disperse nanotubes only at very low concentrations (e.g., typically <0.02 wt% of single-walled CNTs). The most common dispersion agents are polyvinylpyrrolidone (PVP), Sodium Dodecyl Benzene Sulfonate (SDBS), Triton 100, or Sodium Dodecyl Sulfonate (SDS).
Cresols are a group of industrial chemicals which can process CNTs at concentrations up to tens of weight percent, resulting in a continuous transition from dilute dispersions, thick pastes, and free-standing gels to an unprecedented playdough-like state, as the CNT loading increases. These states exhibit polymer-like rheological and viscoelastic properties, which are not attainable with other common solvents, suggesting that the nanotubes are indeed disaggregated and finely dispersed in cresols. Cresols can be removed after processing by heating or washing, without altering the surface of CNTs. [Chiou et al. 2018]

To use the benefits of CNTs, they must be dispersed into a liquid such as a polymers, Evenly dispersed CNTs are used for the manufacturing of conductive plastics, liquid crystal displays, organic light-emitting diodes, touch screens, flexible displays, solar cells, conductive inks, static control materials, including films, foams, fibers, and fabrics, polymer coatings and adhesives, high performance polymer composites with exceptional mechanical strength and toughness, polymer/CNT composite fibers, as well as lightweight and antistatic materials.