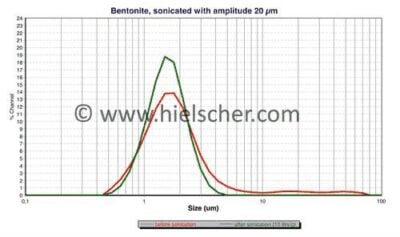 Conventional dipsersion methods often cannot induce the intense shear forces required to prepare a homogeneous slurry of functionalized bentonite. Bentonite’s thixotropy and its extraordinary water binding and swelling capability requires better-than-average dispersing equipment that excels in the handling of high viscosity slurries and provides enough shear to break the agglomerates.
The viscosity of bentonite dispersion increases with increase in concentration. Conventional mixing equipment is not capable to handle the thick slurries lacking in dispersion and hydration quality.
Due to the insufficient mixing capacity, conventional dispersers must be combined with additional processing steps, e.g. milling.

High-power ultrasonic equipment offers intense shear forces that break the bonding between bentonite particles easily. Highly viscous bentonite slurries can be homogeneously processed feeding the suspension through an ultrasonic reactor chamber where the particles are deagglomerated and dispersed to a uniform particle size. The intense agitation and shearing assist the particles’ reduction down to the targeted particle size. Powerful ultrasonication delaminates and exfoliates the bentonite (montmorillonite) resulting in a high particle surface that contributes to an improved swelling and the funcionalization of the bentonite.

How it works: Highly intense ultrasonic forces induced in liquids create cavitation. Ultrasonic cavitation is expressed in pure shear. Thereby, the ultrasonic mixing and dispersing technology is ideal to produce thixotropic suspensions with a very high load of particles.
Due to the intense shearing, ultrasound allows to disperse clays efficiently into slurries. As sonication is carried out as continuous inline process, even slurries of high viscosities such as drilling muds, bitumen emulsions, latex or paints.

Hielscher Ultrasonics is your partner when it comes to reliable ultrasonic processing. We offer you the full range of ultrasonic homogenizers – from the lab device to the industrial ultrasonic equipment for demanding applications such as milling, deagglomeration and dispersion. With clusters of the UIP10000 or UIP16000, there is virtually no limit in the commercial processing of even very large volume streams, including high viscous, pasty material. 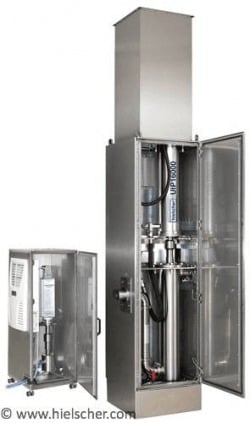 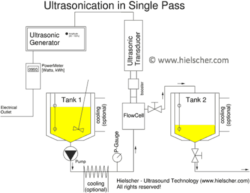 Bentonite clays, including such as sodium bentonite, calcium bentonite and potassium bentonite, consist mainly of smectite minerals, usually montmorillonite (e.g. Al-montmorillonite Al2O3•4(SiO2)•H2O). Montmorillonite is a dioctahedral smectite but eventually other types of smectite can occur. The smectite is responsible for the desirable properties of bentonite, but the nature of the exchangeable cations in the interlayer influences the properties too. Therefore, bentonites with Na+ as the interlayer cation can have very different properties to bentonites where the interlayer cation is Ca+. Most commercial bentonites contain more that 80% smectite, however, various other minerals can occur as impurities. These minerals may include quartz, feldspar, calcite and gypsum. The presence of these minerals can affect the industrial value, reducing or increasing the value of bentonite in dependence on the specific application. Bentonite presents strong colloidal properties and its volume increases several times when coming into contact with water, creating a gelatinous and viscous fluid. The special properties of bentonite such as hydration, swelling, water absorption, viscosity, and thixotropy, make it a valuable material for a wide range of applications.
Bentonite clays are commonly used as lubricants, thickeners, adsorbens, rheological additives, binders, catalysts, purifiers, stabilizers, emulsifiers or bleaching earths. Due to its functionalities, the manifold applications of viscoelastic bentonite gels branch out in the mineral oil & drilling industry, chemistry, ceramics, foundries, building and cleaning industry, agriculture & horticulture, paper production, food industry, as well as in the cosmetic and pharma sector.
Bentonite derivates are known as Bentone, which are modified organoclays with functionalities adapted to specific applications. For example, Bentone 52 and Bentone 57 and Bentone 1000 are common thickening agents used for paints and coatings, whilst Bentone 27, Bentone 128, Bentone 150, Bentone 155 and Bentone 1000 are rheology modifiers used in the oil and drilling industry. Bentone EW, Bentone HC, Bentone MA and Bentonite BC 342 are used as thickener and gellants in cosmetics and pharmaceuticals.
Hielscher’s powerful ultrasonic machines are reliable and effective for dispersing all bentonite, hectorite and Bentone organoclay powders uniformly into bentone dispersions, bentone gels or into final product formulations.