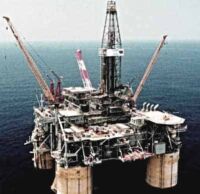 The formulation and consistent quality of drilling mud is a key factor in todays drilling operations. The mud composition and characteristics influence in the well-bore stability, lubrication, cooling and the drilling rate of penetration. Even small problems with the drilling fluid can stop the whole drilling operation. Excessive pressure resulting from too dense or too heavy drilling mud may cause a significant loss of circulation.
WBMs are generally made of freshwater, seawater, or (saturated or formate) brine and natural clays and polymers. OBM and SBM are invert-emulsion systems that have an oil base (diesel, mineral oil) or synthetic base (olefins and paraffins) as the continuous (external) phase, and brine as the disperse (internal) phase. The emulsion should be stable enough to withstand the addition of downhole water flow. Less common than water in oil (invert oil emulsion muds) are oil in water (oil emulsion muds). Ultrasonic emulsification works for both emulsion types and achieves good electrical stability of the internal brine or water phase.
Hielscher ultrasonic reactors are very effective and intense cavitational shear mixers for production use. Generally, the ultrasonic reactors are used inline for high throughput single-pass processing or recirculated batch processing.
You can use ultrasonic mixing to 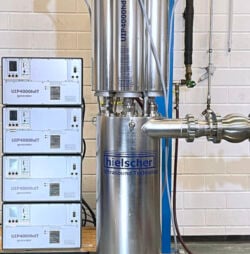 The MultiSonoReactor MSR-4 is an industrial inline homogenizer suitable for the industrial production of drilling muds. Sonication is used for the dispersion and degassing of drilling fluids.

The manufacturing of chemicals and additives, such as liquid polymer slurries benefits from the high processing capacity and flexibility of ultrasonic shear mixing. Ultrasonic mixing unleashes the full potential of additives, such as viscosifiers, filtrate reducer or polymer additives. Ultrasonic cavitation hydrates powders rapidly and completely during drilling mud mixing.
For the mixing of liquid/liquid emulsions, the Hielscher MultiPhaseCavitator improves inline mixing of two phases in the intense cavitational shear zone. For more information about the MultiPhaseCavitator, please click here!
Ultrasonic mixing improves the mass-transfer at boundary layers or particles in liquids. This reduces the time needed to prepare brines or saturated brines, e.g. calcium chloride brine, calcium bromide brine, zinc bromide brine, or potassium and cesium formate brine.

Masterbatches of Clays or Additives

You can use ultrasonic shear mixing to make high concentration or high density master-batches (e.g. of calcium carbonate (chalk), deflocculents or scavengers) before adding these to the final drilling mud formulation.

Drilling mud performance, such as shale stability, viscosity, cooling or lubrication depend on many factors. Uniformity and consistency in quality in of utmost importance. Ultrasonic shear mixing is very effective in the manufacturing of uniform particle size distributions and therefore better dispersion and emulsion stability. This prevents phase separation or settling during storage, transportation or while in the mud pits.
Today drilling mud specifications change frequently. Hielscher ultrasonic reactors are very adaptable to drilling liquid formulation changes. By changing from traditional batch mixing to ultrasonic inline-single-pass mixing, you can make different drilling mud types on the same ultrasonic machine. This helps to reduce inventory and shelf storage time.
The dispersion of conventional clays (e.g. bentonite) and specially-treated organophilic clays in fluids produces highly viscous, thixotropic or shear-thinning gels and slurries. When exposed to high ultrasonic shear the viscosity drops to a free-flowing-state. This facilitates dispersing and handling. For this reason, sonication is very effective for the mixing of thixotropic and shear-thinning slurries. Sonication results in a better dispersion of the bentonite particles / platelets and improved gelling characteristics. For more information about the ultrasonic dispersion of bentonite, please click here! 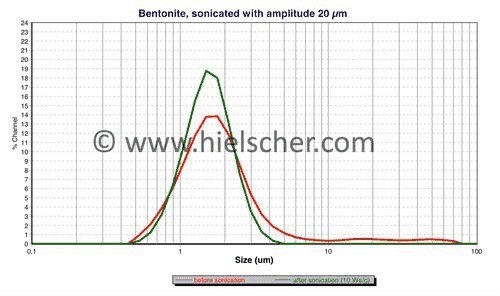 Rheological modifiers, thickeners and stabilizers (e.g. gums, glycol, carboxymethylcellulose, polyanionic cellulose (PAC) or starch) require good dispersing for maximum effectiveness. For more information on the ultrasonic dispersion of thickeners, such as xanthan gum and guar gum, please click here!
Weighting agents, like barium sulfite (barite) must not separate from the mud during storage, transportation or drilling. In accordance with Stokes’ Law, smaller particles sediment slower or not at all. Ultrasonic dispersion avoids larger agglomerates, that can cause dispersion instability. Dispersing a system can increase its tolerance for solids, making it possible to weight up to 20 lb/gallon (US) or 2.4g/cm3.

Degassing of the Drilling Mud

When preparing drilling muds, bentonite clay powder and other additive powders introduce a lot of air into the drilling mud. This gas is entrapped within liquid systems and may cause separation and a loss in emulsifier or stabilizer performance. Repeated compressions (high-pressure cycles) and rarefactions (low-pressure cycles) during the ultrasonication let dissolved gasses migrate and form small microbubbles. Ultrasonic waves then force the gas microbubbles into coalescence. The ultrasonic high cavitational shear reduces the viscosity of shear thinning and thixotropic drilling fluids. This lets air bubbles rise faster. This leads to for better gas separation in downstream separator tanks or vacuum degassing. Degassing increases mud weight, reduces viscosity and separation issues. Less gas bubbles reduce the use of emulsifiers, stabilizers, surfactants or dispersing agents. This reduces the cost per barrel. A reduction in gas content can curb aerobic microbial growth, too. 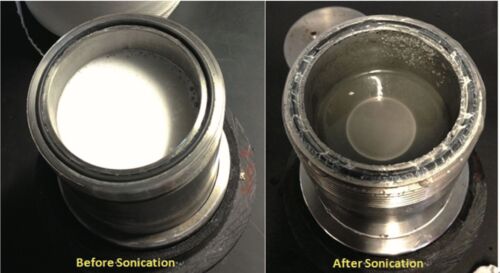 Water-based drilling mud before and after ultrasonic degassing with UIP1000hd
Study and picture by Amani et al. 2016

New regulations restrict the amount of certain chemicals to be used in muds in order to minimize environmental impact. This requires the adaptation of formulations to the new regulatory framework. Ultrasonication can help you to maximize the performance of drilling mud components, so you can use less and lower cost materials. Hielscher offers drilling mud formulation testing in our lab. Including kinematic viscosity measurements at various temperatures with and without shear.

Heavy Duty Design for Industrial Use

The use of ultrasonic mixing in the oil and gas industry extends well beyond drilling muds.