Ultrasonic Degassing and Defoaming of Liquids

Degassing and defoaming of liquids using ultrasonic is a very effective process. Ultrasonication removes small suspended gas-bubbles from the liquid and reduces the level of dissolved gas below the natural equilibrium level.

The degassing and defoaming of liquids is required for many purposes, such as the following processes:

Degassing of liquids is a powerful application of Hielscher ultrasonic devices. The video shows the Hielscher UP200S during the degasification of oil.
Ultrasonic Degassing and Defoaming of Oil

When sonicating liquids, the sound waves that propagate from the radiating surface into the liquid media result in alternating high-pressure and low-pressure cycles, with rates depending on the frequency. During the low-pressure cycle, the ultrasonic waves can create small vacuum bubbles or voids in the liquid. The large number of small bubbles generates a high total bubble surface area. The bubbles are also well distributed in the liquid. Dissolved gas migrates into these vacuum bubbles via the large surface area and increases the size of the bubbles.
The acoustic waves support the touching and coalescence of adjacent bubbles leading to an accelerated growth of the bubbles. The sonication waves will also help to shake bubbles off vessel surfaces and will force smaller bubbles resting below the liquid surface to rise through and release the entrapped gas to the environment.

Degassing of liquids is a powerful application of Hielscher ultrasonic devices. The video shows the Hielscher UP200S during the degasification of water.
Degassing of Water using the UP200S with sonotrode S40 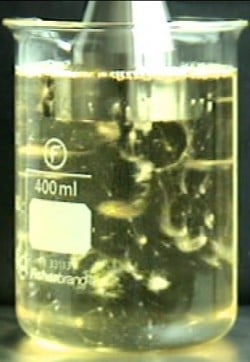 Put It to The Test

The process of the degassing and defoaming of liquids can be made visible easily. In a glass beaker of freshly-poured tap water, ultrasonication will force the small suspended bubbles to coalesce and to move up rapidly. You can see this effect in the progress image below.

Agitated oil contains a high number of suspended bubbles or foam. In particular in coolants, this is a problem. There, the gas bubbles promote cavitation induced wear in pumps or nozzles. The progress image below shows the ultrasonic defoaming effect.

Sonication will generate small vacuum bubbles in clear, stale water. These bubbles fill with dissolved gas, that migrates into the bubbles. Consequently the bubbles grow and move up. The degassing effect is well visible in any translucent liquid.
As the ultrasound improves the rising of small suspended bubbles to the liquid surface, it reduces the contact time between the bubble and the liquid, too. For this reason, it limits the re-dissolving of gas from the bubble to the liquid, too. This is of particular interest for higher viscosity liquids, such as oils or resins. Since the bubbles have to move to the liquid surface, the ultrasonic degassing works better, if the container is shallow so that the time to the surface is shorter.

Beyond the Visible Effects

The measurement of the degassing effects by visual inspection is limited in accuracy. Gas content measurements are a more accurate way to tell about ultrasonic degassing efficiency.

Degassing before Emulsifying and Dispersing

Ultrasonic degassing can improve the quality of dispersions and emulsions.

Often, emulsions and dispersions contain surfactants in order to increase their stability. The surfactants will inhibit the contact and coalescence or agglomeration of the dispersed material in the liquid phase. For this, the surfactants will form a layer around each particle. The same surfactants can also encapsulate gas bubbles that are suspended in the liquid phase. Such stabilized bubbles can prove to be very robust. Stabilized bubbles consume surfactant, reduces the quality of the emulsion or dispersion, and can generate erratic readings when measuring the particle size.

In order to reduce the problem of stabilized gas bubbles, liquids should be degassed by sonication. Before adding the disperse phase, such as oil or powder, sonicate the liquid until the number of generated bubbles reduces. When mixing in other materials, avoid generating new bubbles or a vortex while stirring. This would increase the gas content quickly.

The effect of degassing is being used in the leak-testing of cans and bottles containing carbonated drinks, such as cola, soda or beer. Please click here to get more information about bottle leak testing.

The ultrasonic degassing of liquids works better when using the following setup.

Ultrasonic degassing can be used in batch mode or inline. In the case of an inline operation, a stand-pipe for the discharge of the gas should be installed and a gas pump should be applied.