Improve your Paints, Colors and Coatings with Sonication: 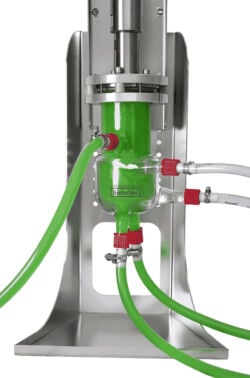 Ultrasonic processing is a powerful method for milling and dispersing pigment pastes. 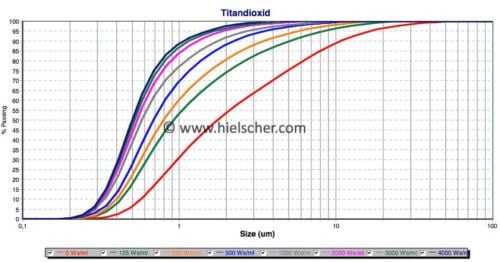 Use ultrasonics for the production of

For the production of paint, the components such as pigments, binders/ film formers, diluents/ solvents, resins, fillers and additives have to mixed together into a homogeneous formulation. Pigments are the determining component that gives paint its color. The most important white pigment is TiO2, which needs to be milled to a optimum particle size between 0.2 and 0.3 microns in diameter to show the desired grade of whiteness, brightness, opacity and a very high refractive index. The ultrasonic shear forces provide a very effective and energy-effective deagglomeration and dispersion of TiO2 particles (see chart below).
Ultrasonic milling and dispersing influences the quality of paint improving its color strength, density, fineness of grinding, dispersion and rheology.

The quality of paints and coatings relies on the homogenous dispersion of the pigments. Hielscher Ultrasonics supplies effective milling and grinding equipment for paint dispersion, especially for for formulations with high pigment loads. The mechanism of ultrasonic dispersers for milling & grinding, deagglomeration and dispersion applications is also based on the shear principle generated by ultrasonic cavitation. The cavitational forces necessary for the dissociation of the particles are produced by high pressure differences, local hot spots and liquid jets, which results in the particle break-up by inter-particle collision.
Industrial ultrasonic dispersers such as the UIP16000 have the capacity to process high volume streams of paints and coatings. 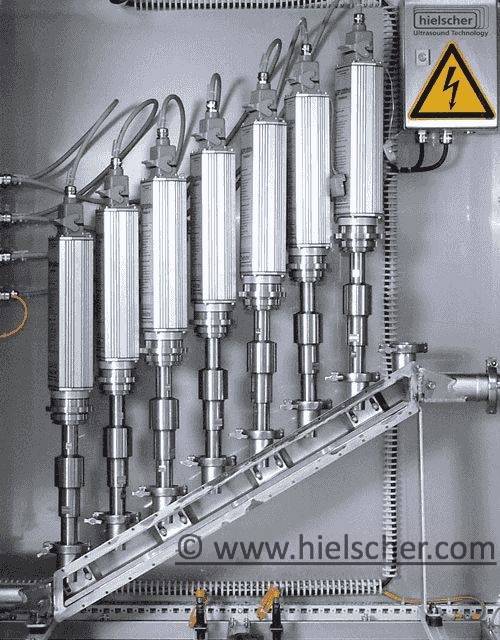 Ultrasonic grinding and dispersing is often the only method to process nano particles efficiently in order to obtain primary particles. A small primary particle size results in a large surface area and correlates with the expression of unique particle characteristics and functionalities. At the same time, a smaller particle size is associated with a high surface energy for more severe aggregation and reactivity, so that the intense ultrasonic dispersing forces are required to disperse the nano particles homogeneously into the formulation.
Furthermore, an ultrasonic surface treatment can modify the nano particles which leads to improved dispersability, dispersion stability, hydrophobicity and other features.
Researchers have recommended the ultrasonic dispersion method for nano particles as preferred solution, “because the material dispersed by the ultrasonic method is much purer than that produced by bead milling”[Kim et al. 2010].

The Hielscher SonoStation makes the sonication of mid-size batches using a flow cell reactor easy.
The compact SonoStation combines a 38 liter agitated tank with an adjustable progressive cavity pump that can feed up 3 liters per minute into one or two ultrasonic flow cell reactors.
Ultrasonic Mixing Station - SonoStation with 2 x 2000 Watts Homogenizers 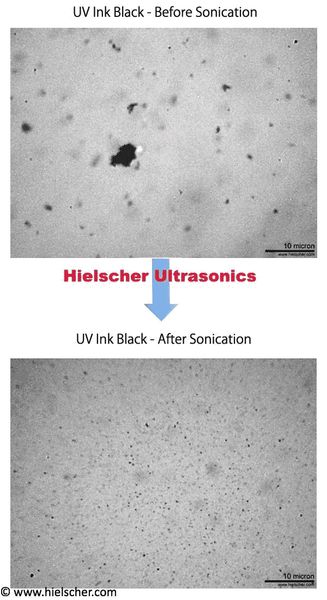 UV-Black Pigments: Before and After Ultrasonication