Ultrasonic synthesis of graphene via graphite exfoliation is the most reliable and advantageous method to produce high-quality graphene sheets on industrial scale. Hielscher’s high-performance ultrasonic processors are precisely controllable and can generate very high amplitudes in 24/7 operation. This allows to prepare high volumes of pristine graphene in a facile and size-controllable way.

Since the extraordinary characteristics of graphite are known, several methods for its preparation have been developed. Beside to chemical production of graphenes from graphene oxide in multi-step processes, for which very strong oxidizing and reducing agents are needed. Additionally, the graphene prepared under these harsh chemical conditions often contain a large amount of defects even after reduction compared to graphenes obtained from other methods. However, ultrasound is a proven alternative to produce high quality graphene, also in large quantities. Researchers have developed slightly different ways using ultrasound, but in general the graphene production is a simple one-step process.
To give an example of a specific graphene production route: Graphite is added in a mixture of dilute organic acid, alcohol, and water, and then the mixture is exposed to ultrasonic irradiation. The acid works as a “molecular wedge” which separates sheets of graphene from the parent graphite. By this simple process, a large quantity of undamaged, high-quality graphene dispersed in water is created. (An et al. 2010)

Ultrasound allows for the preparation of graphenes in organic solvents, surfactants/water solutions, or ionic liquids. This means that the use of strong oxidizing or reducing agents can be avoided. Stankovich et al. (2007) produced graphene by exfoliation under ultrasonication.
The AFM images of graphene oxide exfoliated by the ultrasonic treatment at concentrations of 1 mg/mL in water always revealed the presence of sheets with uniform thickness (~1 nm; example is shown in Fig. 1 below). These well-exfoliated samples of graphene oxide contained no sheets either thicker or thinner than 1nm, leading to a conclusion that complete exfoliation of graphene oxide down to individual graphene oxide sheets was indeed achieved under these conditions. (Stankovich et al. 2007)

Stengl et al. have shown the successful preparation of pure graphene sheets in large quantities during the production of nonstoichiometric TiO2 graphene nanocomposit by thermal hydrolysis of suspension with graphene nanosheets and titania peroxo complex. The pure graphene nanosheets were produced from natural graphite using a high intensity cavitation field generated by Hielscher’s ultrasonic processor UIP1000hd in a high-pressure ultrasonic reactor at 5 bar. The graphene sheets obtained, with high specific surface area and unique electronic properties, can be used as a good support for TiO2 to enhance the photocatalytic activity. The research group claims that the quality of the ultrasonically prepared graphene is much higher than graphene obtained by Hummer’s method, where graphite is exfoliated and oxidized. As the physical conditions in the ultrasonic reactor can be precisely controlled and by the assumption that the concentration of graphene as a dopant will vary in the range of 1 – 0.001%, the production of graphene in a continuous system on commercial scale is possible. 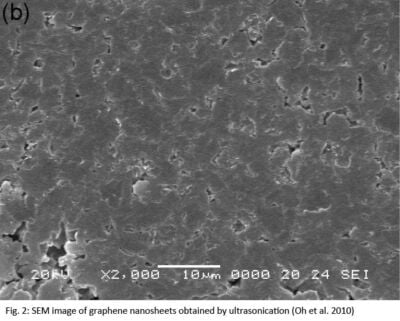 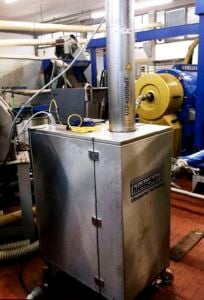 Xu and Suslick (2011) describe a convenient one-step method for the preparation of polystyrene functionalized graphite. In their study, they used graphite flakes and styrene as basic raw material. By sonicating the graphite flakes in styrene (a reactive monomer), the ultrasound irradiation resulted in the mechanochemical exfoliation of graphite flakes into single-layer and few-layer graphene sheets. Simultaneously, the functionalization of the graphene sheets with the polystyrene chains has been achieved.
The same process of functionalization can be carried out with other vinyl monomers for composites based on graphene.

The research group of Hongjie Dai and his colleagues from Stanford University found a technique to prepare nanoribbons. Graphene ribbons are thin strips of graphene that may have even more useful characteristics than graphene sheets. At widths of about 10 nm or smaller, the graphene ribbons behavior is similar to a semiconductor as electrons are forced to move lengthwise. Thereby, it could be interesting to use nanoribbons with semiconductor-like functions in electronics (e.g. for smaller, faster computer chips).
Dai et al. preparation of graphene nanoribbons bases on two steps: firstly, they loosened the layers of graphene from graphite by a heat treatment of 1000ºC for one minute in 3% hydrogen in argon gas. Then, the graphene was broken up into strips using ultrasonication. The nanoribbons obtained by this technique are characterized by much ‘smoother’ edges than those made by conventional lithographic means. (Jiao et al. 2009)

Carbon Nanoscrolls are similar to multi-walled carbon nanotubes. The difference to MWCNTs is the open tips and the full accessibility of the inner surfaces to other molecules. They can be synthesized wet-chemically by intercalating graphite with potassium, exfoliating in water and sonicating the colloidal suspension. (cf. Viculis et al. 2003) The ultrasonication assists the scrolling up of the graphene monolayers into carbon nanoscrolls (see fig. 3). A high conversion efficiency of 80% has been achieved, that makes the production of nanoscrolls interesting for commercial applications. 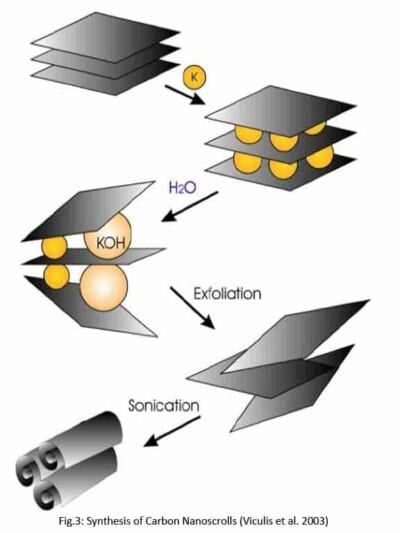 The dispersion grade of graphene and graphene oxide is extremely important to use the full potential of graphene with its specific characteristics. If graphene is not dispersed under controlled conditions, the polydispersity of graphene dispersion can lead to unpredictable or nonideal behavior once it is incorporated into devices since the properties of graphene vary as a function of its structural parameters. Sonication is a proven treatment to weaken the interlayer forces and allows for an accurate control of the important processing parameters.
“For graphene oxide (GO), which is typically exfoliated as single-layer sheets, one of the main polydispersity challenges arises from variations in the lateral area of the flakes. It has been shown that the mean lateral size of GO can be shifted from 400 nm to 20 μm by changing the graphite starting material and the sonication conditions.” (Green et al. 2010)
The ultrasonic dispersing of graphene resulting in fine and even colloidal slurries has been demonstrated in various other studies. (Liu et al. 2011/ Baby et al. 2011/ Choi et al. 2010)
Zhang et al. (2010) have shown that by the usage of ultrasonication a stable graphene dispersion with a high concentration of 1 mg·mL−1 and relatively pure graphene sheets are achieved, and the as-prepared graphene sheets exhibit a high electric conductivity of 712 S·m−1. The results of Fourier transformed infrared spectra and Raman spectra examination indicated that the ultrasonic preparation method has less damage to the chemical and crystal structures of graphene.

For the production of high-quality graphene nano-sheets, reliable high-performance ultrasonic equipment is required. Amplitude, pressure and temperature an essential parameters, which are crucial for reproducibility and consistent product quality. Hielscher Ultrasonics’ ultrasonic processors are powerful and precisely controllable systems, which allow for the exact setting of process parameters and continuous high-power ultrasound output. Hielscher Ultrasonics’ industrial ultrasonic processors can deliver very high amplitudes. Amplitudes of up to 200µm can be easily continuously run in 24/7 operation. For even higher amplitudes, customized ultrasonic sonotrodes are available. The robustness of Hielscher’s ultrasonic equipment allows for 24/7 operation at heavy duty and in demanding environments.
Our customers are satisfied by the outstanding robustness and reliability of Hielscher Ultrasonic’s systems. The installation in fields of heavy-duty application, demanding environments and 24/7 operation ensure efficient and economical processing. Ultrasonic process intensification reduces processing time and achieves better results, i.e. higher quality, higher yields, innovative products.
The table below gives you an indication of the approximate processing capacity of our ultrasonicators:

Graphite is composed of two dimensional sheets of sp2-hybridized, hexagonally arranged carbon atoms — the graphene — that are regularly stacked. The graphene’s atom-thin sheets, which form graphite by non-bonding interactions, are characterized by an extreme larger surface area. Graphene shows an extraordinary strength and firmness along its basal levels that reaches with approx. 1020 GPa almost the strength value of diamond.
Graphene is the basic structural element of some allotropes including, besides graphite, also carbon nanotubes and fullerenes. Used as additive, graphene can dramatically enhance the electrical, physical, mechanical, and barrier properties of polymer composites at extremely low loadings. (Xu, Suslick 2011)
By its properties, graphene is a material of superlatives and thereby promising for industries that produce composites, coatings or microelectronics. Geim (2009) describes graphene as supermaterial concisely in the following paragraph:
“It is the thinnest material in the universe and the strongest ever measured. Its charge carriers exhibit giant intrinsic mobility, have the smallest effective mass (it is zero) and can travel micrometer-long distances without scattering at room temperature. Graphene can sustain current densities 6 orders higher than copper, shows record thermal conductivity and stiffness, is impermeable to gases and reconciles such conflicting qualities as brittleness and ductility. Electron transport in graphene is described by a Dirac-like equation, which allows the investigation of relativistic quantum phenomena in a bench-top experiment.”
Due to these outstanding material’s characteristics, graphene is one of the most promising materials and stands in the focus of nanomaterial research.

Biological applications: An example for ultrasonic graphene preparation and its biological use is given in the study “Synthesis of Graphene-Gold Nanocomposites via Sonochemical Reduction” by Park et al. (2011), where a nanocomposite from reduced graphene oxide -gold(Au) nanoparticles was synthesized by simultaneously reducing the gold ions and depositing gold nanoparticles on the surface of the reduced graphene oxide simultaneously. To facilitate the reduction of gold ions and the generation of oxygen functionalities for anchoring the gold nanoparticles on the reduced graphene oxide, ultrasound irradiation was applied to the mixture of reactants. The production of gold-binding-peptide-modified biomolecules shows the potential of ultrasonic irradiation of graphene and graphene composites. Hence, ultrasound seems to be a suitable tool to prepare other biomolecules.
Electronics: Graphene is a highly functional material for the electronic sector. By the high mobility of the charge carriers within the graphene’s grid, graphene is of highest interest for the development of fast electronic components in the high-frequency-technology.
Sensors: The ultrasonically exfoliated graphene can be used for the production of highly sensitive and selective conductometric sensors (whose resistance rapidly changes >10 000% in saturated ethanol vapor), and ultracapacitors with extremely high specific capacitance (120 F/g), power density (105 kW/kg), and energy density (9.2 Wh/kg). (An et al. 2010)
Alcohol: For alcohol production: A side application may be the usage of graphene in the alcohol production, there graphene membranes can be used to distill alcohol and to make thereby alcoholic beverages stronger.
As the strongest, most electrically conductive and one of the lightest and most flexible materials, graphene is a promising material for solar cells, catalysis, transparent and emissive displays, micromechanical resonators, transistors, as cathode in lithium-air batteries, for ultrasensitive chemical detectors, conductive coatings as well as the use as additive in compounds.

When sonicating liquids at high intensities, the sound waves that propagate into the liquid media result in alternating high-pressure (compression) and low-pressure (rarefaction) cycles, with rates depending on the frequency. During the low-pressure cycle, high-intensity ultrasonic waves create small vacuum bubbles or voids in the liquid. When the bubbles attain a volume at which they can no longer absorb energy, they collapse violently during a high-pressure cycle. This phenomenon is termed cavitation. During the implosion very high temperatures (approx. 5,000K) and pressures (approx. 2,000atm) are reached locally. The implosion of the cavitation bubble also results in liquid jets of up to 280m/s velocity. (Suslick 1998) The ultrasonically generated cavitation causes chemical and physical effects, which can be applied to processes.
Cavitation-induced sonochemistry provides a unique interaction between energy and matter, with hot spots inside the bubbles of ~5000 K, pressures of ~1000 bar, heating and cooling rates of >1010K s-1; these extraordinary conditions permit access to a range of chemical reaction space normally not accessible, which allows for the synthesis of a wide variety of unusual nanostructured materials. (Bang 2010)