Single-Walled Carbon Nanotubes (SWNTs or SWCNTs) have unique characteristics, but to express them they must be individually dispersed. To make full use of the exceptional characteristics of single-walled carbon nanotubes, the tubes must be detangled most completely. SWNTs as other nanoparticles show very high attraction forces, so that a powerful and efficient technique is needed for a reliable deagglomeration and dispersion. Whilst common mixing techniques do not provide the intensity needed to detangle SWNTs without damaging them, high-power ultrasonics is proven to detangle and disperse SWCNTs. Ultrasonically generated cavitational shear forces are powerful enough to overcome the bonding forces, whilst the ultrasound intensity can be adjusted accurately to avoid the damage of the SWCNTs.

Single-Walled Carbon Nanotubes (SWCNTs) differ from Multi-Walled Carbon Nanotubes (MWNTs/ MWCNTs) by their electric properties. The band gap of SWCNTs can vary from zero to 2 eV and their electric conductivity features metallic or semiconducting behavior. As Single-Walled Carbon Nanotubes are highly cohesive, one of the major obstacles in processing SWCNTs is the inherent insolubility of the tubes in organic solvents or water. To use the full potential of SWCNTs, a simple, reliable and scalable deagglomeration process of the tubes is needed. Especially, the functionalization of the CNT side walls or open ends to create a suitable interface between the SWCNTs and the organic solvent results in partial exfoliation of the SWCNTs, only. Therefore, SWCNTs are mostly dispersed as bundles rather than individual deagglomerated ropes. If the condition during dispersion are too harsh, the SWCNTs will be shortened to lengths between 80 to 200nm. For the majority of practical applications, i.e. for semiconducting or reinforcing SWCNTs, this length is too small. 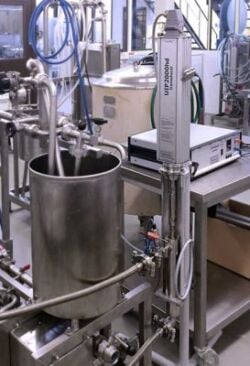 Ultrasonication is a very effective method of dispersing and deagglomeration of Carbon Nanotubes, as ultrasonic waves of high intensity ultrasound generate cavitation in liquids. The sound waves propagated in the liquid media result in alternating high-pressure (compression) and low-pressure (rarefaction) cycles, with rates depending on the frequency. During the low-pressure cycle, high-intensity ultrasonic waves create small vacuum bubbles or voids in the liquid. When the bubbles attain a volume at which they can no longer absorb energy, they collapse violently during a high-pressure cycle. This phenomenon is termed cavitation. During the implosion very high temperatures (approx. 5,000K) and pressures (approx. 2,000atm) are reached locally. The implosion of the cavitation bubble also results in liquid jets of up to 280m/s velocity. These liquid jet streams resulting from ultrasonic cavitation, overcome the bonding forces between the Carbon Nanotubes and hence, the nanotubes become deagglomerated. A mild, controlled ultrasonic treatment is an appropriate method to create surfactant-stabilized suspensions of dispersed SWCNTs with high length. For the controlled production of SWCNTs, Hielscher’s ultrasonic processors allows for running at a wide range of ultrasonic parameters sets. The ultrasonic amplitude, liquid pressure and liquid composition can be varied respectively to the specific material and process. This offers variable possibilities of adjustments, such as

Furthermore, ultrasonication as a polymer-assisted purification method allows to remove impurities from as-grown SWCNTs, effectively. It is difficult to study the chemical modification of SWCNTs at the molecular level, because is difficult to obtain pure SWNTs. As-grown SWCNTs contain many impurities, such as metal particles and amorphous carbons. Ultrasonication of SWCNTs in a monochlorobenzene (MCB) solution of poly(methyl methacrylate) PMMA followed by filtration is an effective way to purify SWCNTs. This polymer-assisted purification method allows removing impurities from as-grown SWCNTs effectively. Accurate control of the ultrasonication amplitude allows to avoid or limit damaging the SWCNTs.

Hielscher offers high performance ultrasonic processors for the sonication of every volume. Ultrasonic devices from 50 watts up to 16.000 watts, which could set up in clusters, allow finding the appropriate ultrasonic for each application, in the lab as well as in the industry. For the sophisticated dispersion of nanotubes, a continuous sonication is recommended. Using Hielscher’s flow cells, it becomes possible to disperse CNTs into liquids of elevated viscosity such as polymers, high viscosity melts and thermoplastics.

Click here to read more about the dispersion and modification of nanotubes by high-power ultrasound! 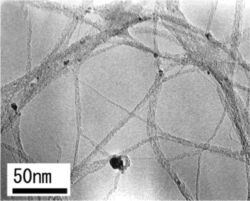 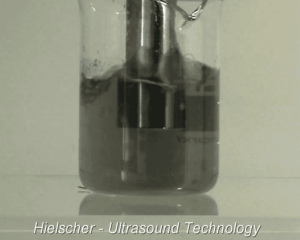 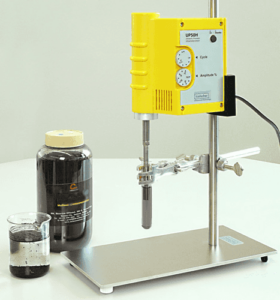