Since pharmacological effects are mostly related directly to the plasma levels, the absorption and bioavailability of active pharmaceutical ingredients is crucial. The bioavailability of phytochemical such as cannabinoids (i.e. CBD, THC, CBG and others) or curcuminoids is limited due to poor solubility, poor permeation, low systemic availability, instability, extensive first pass metabolism or degradation in the GI tract.
Nanoformulations such as nano-emulsions, liposomes, micelles, nano-crystals, or loaded nanoparticles are used in pharmaceuticals and supplements for improved and/or targeted drug delivery. Nanoemulsions are known to be very good vehicles to achieve a high bioavailability of active pharmaceutical ingredients (APIs) and phytochemical compounds. Furthermore, nanoemulsions may also protect APIs, which may be susceptible to hydrolysis and oxidation. APIs and phytochemicals (e.g. cannabinoids, curcuminoids) encapsulated in O/W nano-emulsions have been tested in various scientific trials and are well established as drug carriers with superior absorption rates.

The bioavailability of orally administered flavonoids as well as many other phenolic active ingredients is severely limited by extensive first-pass glucuronidation. In order to overcome the limitations of poor bioavailability, nano-sized carriers such as nanoemulsions and liposomes have been extensively evaluated for various drugs and have shown great results in improving the absorption.
Paclitaxel: Nanoemulsions loaded with paclitaxel (a chemotherapy drug used in cancer treatments) had a droplet size between ~90.6nm (smallest mean particle size) and 110nm.
“The results of the pharmacokinetic studies indicated that encapsulation of paclitaxel in nanoemulsions did enhance the oral bioavailability of paclitaxel significantly. The enhanced oral bioavailability, as measured by the area-under-the curve (AUC), of paclitaxel in nanoemulsions might be attributed to the solubilization of the drug in the oil droplets and/or to the presence of surfactants at the oil–water interface. Enhanced absorption of paclitaxel can also be attributed to the protection of drug from chemical as well as enzymatic degradation. Improved oral bioavailability of various hydrophobic drugs in O/W type of emulsions has been reported in the literature.” [Tiwari 2006, 445]

Curcuminoids: Lu et al. (2017, p.53) report the preparation of ultrasonically extracted curcuminoids, which have been emulsified ultrasonically to a nanoemulsion. Curcuminoids were extracted under sonication in ethanol. For the nano-emulsification, they put 5mL curcuminoid extract into a vial and evaporated the ethanol under nitrogen. Then, 0.75 g of lecithin and 1 mL of Tween 80 were added and mixed homogeneously, which was followed by adding 5.3mL of deionized water. The mixture was stirred thoroughly and afterwards sonicated.
The average particle size of curcuminoid nanoemulsion with spherical shape as determined by TEM was 12.1nm. (see figure below) 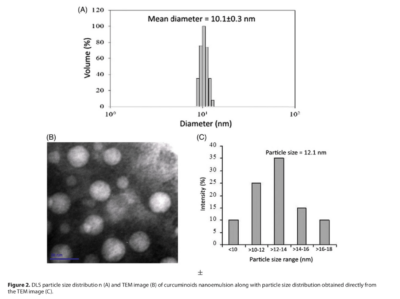 Polymers such as polylactic-co-glycolic acid (PLGA) or polyethylene glycol are often used as a major component to improve encapsulation and enhancement of both stability and oral bioavailability. However, the use of polymers is correlated with a larger particle size (often >100nm). The prepared curcuminoid nanoemulsion by Lu et al. had a substantially reduced size of 12-16nm. The shelf-life was also improved with a high stability of our curcuminoid nanoemulsion over a storage period of 6 months at 4℃ and 25℃ as indicated by a mean particle size of 12.4 ± 0.5nm and 16.7 ± 0.6nm, respectively, after prolonged storage. 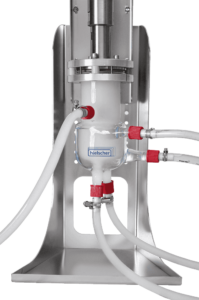 The Effect of Pharmaceutical Excipients

Mebudipine: Khani et al. (2016) report the formulation of a mebudipine-loaded nanoemulsion containing ethyl oleate, Tween 80, Span 80, polyethylene glycol 400, ethanol and DI water were prepared using probe-type ultrasonicator. They found the particle size for a optimum formulation was 22.8 ± 4.0 nm which resulted in a relative bioavailability of the mebudipine nanoemulsion that was enhanced by about 2.6-fold. The results of in vivo experiments have shown that nanoemulsion formulation was able to enhance bioavailability of mebudipine significantly compared to the suspension, oil-soluble and micellar solution.

Ocular nanoemulsions, e.g. for ophthalmic drug delivery, have been prepared in order to achieve better availability, faster penetration and higher efficacy.
Ammar et al (2009) formulated dorzolamide hydrochloride in a nanoemulsion (size range of 8.4-12.8nm) in order to achieve a increased effects in the treatment of glaucoma, a decrease in the number of applications per day, and a better patient compliance compared to conventional eye drops. The the developed nanoemulsions showed fast onset of drug action and prolonged effect as well as enhanced drug bioavailability compared to the conventional market product.
of high therapeutic efficacy

Hielscher Ultrasonics offers ultrasonic systems from compact lab homogenizers to industrial turnkey solutions. To produce nanoemulsions of highest pharmaceutical grade, a reliable emulsification process is crucial. Hielscher’s broad variety of sonotrodes, flow cells and inserts such as the MultiPhase Cavitator MPC48 enable our customer to setup the optimal processing conditions to produce nano-sized emulsions at standardized, reliable and consistent quality. Hielscher’s ultrasoniators are equipped with state-of-the-art software for operation and control – ensuring the reliable production of standardised pharmaceuticals and pharma-grade supplements.
Contact us today to discover the possibilities of ultrasonically nano-formulated APIs and phytochemicals!

High-power ultrasound is widely used to isolate from phytochemicals (i.e flavonoids, terpenes antioxidants etc.) from plant material. Ultrasonic cavitation perforates and breaks the cell walls so that the intracellular matter is released into the surrounding solvent. The big advantages of sonication lie the non-thermal treatment and the solvent use. Ultrasonic extraction is a non-thermal, mechanical method – meaning that the delicate phytochemicals are not degraded by high temperatures. Regarding solvents, there is a broad selection that can be used for extraction. Common solvents include water, ethanol, glycerin, vegetable oils (e.g. olive oil, MCT oils, coconut oil), grain alcohol (spirits), or a water-ethanol mix amongst may other solvents.
Click here to learn more about the ultrasonic extraction of phytochemical compounds from plants!

The extraction of a combination of several phytochemicals from a plant is known for stronger effects. The synergy of various plant compounds is known as entourage. Whole plant extracts combine manifold phytochemicals. For instance, cannabis contains over 480 active compounds. A cannabis extract, which includes CBD (cannabidiol), CBG (cannabigerol), CBN (cannabinol), CBC (cannabichromene), terpenes and many other phenolic compounds, is much more effective since the manifold compounds work synergistically. Ultrasonic extraction is a highly efficient method to produce a full spectrum extract of superior quality.