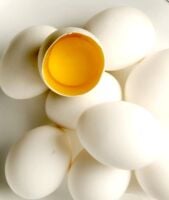 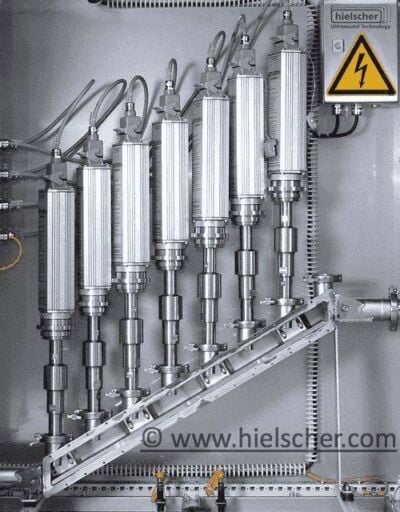 Ultrasonic food processing systems are well-known and proven for their reliable results in homogenization, extraction, pasteurization and sterilization of food products. Hielscher’s industrial ultrasonic processors create very high amplitudes of up to 200µm in order to deliver the required energy for pasteurization, sterilization and emulsification processes. Of course, our ultrasonic homogenizers are built for 24/7 operation under heavy-duty conditions in industry.
Besides their robustness and reliability, ultrasonic processors require only very low maintenance and are very easy to clean. All parts of the ultrasonic homogenizer, which get in contact with the food product, are made from titanium, stainless steel or glass and are autoclavable. Since every ultrasonic processor has its ultrasonic cleaner in place, they offer automatically CIP (cleaning-in-place) and SIP (sterilizing-in-place).
A small foot print and versability allow for an hassel-free integration of Hielscher’s ultrasonicators into production lines. Retro-fitting into existing lines can be accomplished easily.
The table below gives you an indication of the approximate processing capacity of our ultrasonicators:

Javad Sargolzaei et al. (2011) modified the application of high power ultrasound in preparation of stable oil-in-water emulsion. All emulsion samples were prepared by using a Hielscher ultrasonic processor UP200H. The effect of pH, ionic strength, pectin, Guar gum, lecithin, egg yolk, and xanthan gum as well as the time of sonication, temperature and viscosity of oil-water mixture on the specific surface area and size of droplets, and creaming index of the emulsion samples was investigated. The experimental data were analyzed with Taguchi method and optimum conditions were determined. In addition, an adaptive neuro-fuzzy inference system (ANFIS) was employed to modeling and categorizes the properties of the resulted emulsion. The results showed that increasing sonication time narrowed the range of droplets size distribution. Pectin and xanthan enhanced the stability of emulsion, although they had different impacts on the emulsion stability when used individually or together. Guar gum improved the viscosity of the continuous phase. Emulsions stabilized by egg yolk were found to be stable to droplet flocculation at pH 3 and at relatively low salt concentrations.

Ultrasonic Degradation of Cholesterol in Yolk

What is Ultrasonic Cavitation?

As shown by our results, static pressure is a very efficient means of increasing lethality of ultrasound waves (UW) / manosonication (MS). This increase becomes greater when the amplitude of UW is higher. Between 50 and 58°C, the lethality of heat can be increased by combining heat treatments with UW under pressure (MS). The lethality of this treatment (MTS) is equivalent to the additive lethal effect of heat and UW. MS and MTS treatments could become an alternative for the inactivation, in heat-sensitive media (i.e., liquid egg), of Y. enterocolitica and possibly other microorganisms. It might also find applications in foods in which the high intensity of heat treatments required (e.g. low-water-activity foods) would impair food quality. (cf. Raso et al. 1998)
Researcher has revealed that nonthermal food preservation technologies, such as sonication, does not affect, as much as thermal processes, nutritional and sensory attributes of processed foods.

Whilst chicken eggs are the most commonly consumed bird egg, also other varieties of bird eggs, e.g. ostrich, duck, quail, goose eggs etc., are used as food and food ingredients.
Eggs offer multi-functionality and are therefore widely used as ingredient in manifold food products.
Functional attributes of eggs include the properties of coagulation and binding, flavor, color, foaming, emulsifying as well as inhibited crystal growth in confectionary. To maintain these functionalities of egg, a mild pasteurization is required avoiding protein denaturation.
Liquid egg products range from liquid whole egg, egg white, and yolk to scrambled egg mixes and other specialized egg products. Liquid egg products are available as ready-to-use products or in frozen form. Liquid egg can be further refined into egg powders, e.g. whole egg powder, egg white powder, yolk powder. Egg powder is made from fully dehydrated eggs by spray-drying the eggs in the same way that milk powder is produced. Advantages of powdered eggs over fresh eggs include low price, reduced weight per volume of whole egg equivalent, shelf life, less storage space, and needlessness of refrigeration.

Eggs contain several heat-sensitive proteins that are an important factor to consider when liquid egg (also known as breaker eggs) is processed and pasteurized. Especially liquid egg white products are sensitive to processing conditions, especially heat. The temperature for egg white proteins denaturation varies between 61°C (for Ovotransferrin) and 92.5°C (for G2 Globulin). Livetins, lysozyme,
ovomacroglobulin and ovoglobulin G3 are the least heat stable proteins, while ovotransferrin, ovoinhibitor and ovoglobulin G2 were found to be the most heat stable proteins in egg. Protein sensitivity to heat can be influenced by the addition of salt and sugar, which increases the heat stability of heat-sensitive proteins.
Not only sugar and salt, also carbohydrates, such as sucrose, glucose, fructose, arabinose, mannitol and xylose, protect proteins from denaturation during heat treatments (pasteurization).
Coagulation temperature of whole egg: at 73°C

In order to obtain a homogeneous liquid egg product, the liquid egg must be mechanically stabilized in order to prevent separation into two phases.
An emulsion is a mixture of two or more immiscible / non-blendable liquids. Technically, emulsions are a subdivision of colloidal systems of two or more phases. In emulsions, both the dispersed/internal and the continuous/external phase are liquid. In emulsions, two immiscible liquids are blended by dispersing one liquid (the dispersed phase) in the other (the continuous phase). Emulsifying agents are utilized to obtain long-term mechanical stability of the system.
Lecithin, which is e.g. a component in egg yolk, is a commonly used food emulsifier for food and industrial applications. Besides lecithin, egg yolk contains several amino acids that functions as emulsifiers, too. Egg yolk contains approx. 5-8grams of lecithin, which is why egg yolk is an important ingredient in many emulsion-based recipes such as mayonnaise, hollandaise, dressings, and sauces.

Egg-white proteins contain amino acids. When the protein is curled up, the hydrophobic amino acids are packed in the center away from the water and the hydrophilic ones are on the outside closer to the water.
When an egg protein is up against an air bubble, part of that protein is exposed to air and part is still in water. The protein uncurls so that its water-loving parts can be immersed in the water—and its water-fearing parts can stick into the air. Once the proteins uncurl, they bond with each other—just as they did when heated—creating a network that can hold the air bubbles in place.

Eggnog is a milk-based drink which consists in milk, eggs, sugar and flavourings and sometimes alcohol. It is a sweet, rich, creamy dairy-based beverage traditionally made with milk, cream, whipped egg whites, egg yolks, and sugar. Optionally, when produced as liquor, distilled spirits such as brandy, rum or bourbon are incorporated.