Synthesizing Nano-Silver with Honey and Ultrasonics

Nano-silver is use for its anti-bacterial properties to reinforce materials in medicine and material science. Ultrasonication allows for a rapid, efficacious, safe, and environmental-friendly synthesis of spherical silver nanoparticles in water. Ultrasonic nanoparticle synthesis can be easily scaled from small to large production.

Sonochemical synthesis, which are synthetical reactions under ultrasonic irradiation, are widely used to produce nanoparticles such as silver, gold, magnetite, hydroxyapatite, chloroquine, perovskite, latex and many other nano-materials.

For silver nano-particles, several ultrasonically-assisted synthesis routes are known. Below, an ultrasonic synthesis route using honey as reducing and ligand capping agents, is presented. Honey components such as glucose and fructose are responsible for its role as both capping and reducing agent in the synthesis process.
Like most common methods for nanoparticle synthesis, the ultrasonic nano-silver synthesis falls under the category of wet chemistry, too. Ultrasonication promotes the nucleation of silver nano-particles within a solution. The ultrasonically promoted nucleation occurs when a silver precursor (silver ion complex), e.g. silver nitrate (AgNO3) or silver perchlorate (AgClO4), is reduced to colloidal silver in the presence of a reducing agent, such as honey. Under the condition that the concentration of silver ions in the solution increases enough, dissolved metallic silver ions bind together and form a stable surface. When the cluster of silver ions is still small, it is an energetically unfavourable condition due to a negative energy balance. The negative energy balance occurs since the energy gained by decreasing the concentration of dissolved silver particles is lower than the energy spent by creating a new surface.
When the cluster reaches the critical radius, which is the point when it becomes energetically favourable, it is stable enough to continue to grow. During the growth phase, more silver atoms diffuse through the solution and attach to the surface. When the concentration of dissolved atomic silver decreases to a certain point, the nucleation threshold is reached so that the atoms cannot bind longer together in order to form a stable nucleus. At this nucleation threshold, the growth of new nanoparticles ceases, and the remaining dissolved silver is absorbed by diffusion into the growing nanoparticles in the solution.
Sonication promotes the mass transfer, i.e. the wetting of the clusters, which results in a faster nucleation. By precisely controlled sonication, the growth rate, size, and shape of the nano-particle structures can be determined.
Click here to read more about another green method to ultrasonically synthesize nano-silver using carrageenan! 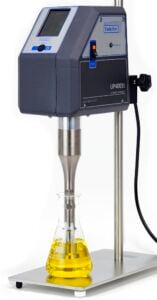 Best conditions to synthesise colloidal silver nanoparticles were found to be the following: Reducing silver nitrate under ultrasonication mediated by natural honey. Briefly, 20 ml of silver nitrate solution (0.3 M) containing honey (20 wt%) was exposed to high-intensity ultrasound irradiation under ambient conditions for 30 min. Ultrasonication was carried out with a probe-type ultrasonicator UP400S (400W, 24 kHz) immersed directly into the reaction solution.

Food-grade honey is used as capping / stabilizing and reducing agent, which makes the aqueous nucleation solution and the precipitated nanoparticles clean and safe for manifold applications.
As ultrasonication time increases, the silver nanoparticles become smaller and their concentration is enhanced.
In the aqueous honey solution, ultrasonication is a key factor that influences the formation of silver nano-particles. Sonication parameters such as amplitude, time and continuous vs pulsating ultrasound are major factors that allow for controlling size and quantity of the silver nano-particles.

The ultrasonically promoted, honey-mediated synthesis with the UP400St resulted in spherical silver nano-particles (Ag-NPs) with an average particle size of about 11.8nm. The ultrasonic synthesis of the silver nano-particles is a simple and rapid one-pot method. The use of water and honey as materials, makes the reaction cost-effective and exceptionally environmental-friendly.
The presented technique of ultrasonic synthesis using honey as reducing and capping agent can be extended to other noble metals, such as gold, palladium, and copper, which offers various additional application from medicine to industry. 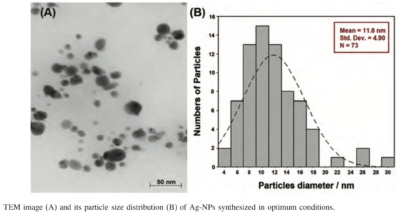 TEM image (A) and its particle size distribution (B) of Ag-NPs synthesized in optimum conditions.

Ultrasound enables for the production of nano-particles such as silver nano-particles tailored to requirements. Three general options of sonication have important effects on the output:
Initial Sonication: The short application of ultrasound waves to a supersaturated solution can initiate the seeding and formation of nuclei. As sonication is only applied during the initial stage, the subsequent crystal growth proceeds unimpeded resulting in larger crystals.
Continuous Sonication: The continuous irradiation of the supersaturated solution results in small crystals since the unpaused ultrasonication creates a lot of nuclei resulting in the growth of many small crystals.
Pulsed Sonication: Pulsed ultrasound means the application of ultrasound in determined intervals. A precisely controlled input of ultrasonic energy allows to influence the crystal growth in order to obtain a tailored crystal size.

Hielscher Ultrasonics supplies powerful and reliable ultrasonic processors for sonochemical applications including sono-synthesis and sono-catalysis. Ultrasonic mixing and dispersing increases the mass transfer and promotes the wetting and subsequent nucleation of atom clusters in order to precipitate nano-particles. Ultrasonic synthesis of nano-particles is a simple, cost-effective, biocompatible, reproducible, rapid, and safe method.
Hielscher Ultrasonics supplies powerful and precisely controllable ultrasonic processors for the nucleation and precipitation of nano-materials. All digital devices are equipped with intelligent software, coloured touch display, automatic data recording on a built-in SD-card and feature an intuitive menu for user-friendly and safe operation.
Covering the complete power range from 50 watts hand-held ultrasonicators for the lab up to 16,000 watts powerful industrial ultrasonic systems, Hielscher has the ideal ultrasonic setup for your application. The robustness of Hielscher’s ultrasonic equipment allows for 24/7 operation at heavy duty and in demanding environments.
The table below gives you an indication of the approximate processing capacity of our ultrasonicators:

Silver nano-particles are particles of silver with the size between 1nm and 100nm. Silver nanoparticles have an extremely large surface area, which permits the coordination of a vast number of ligands.
Silver nanoparticles offer unique optical, electrical, and thermal properties which makes them highly valuable for material science and product developments, e.g., photovoltaics, electronics, conductive inks, biological / chemical sensors.
Another application, which has become already widely established, is the usage of silver nanoparticles for antimicrobial coatings, and many textiles, keyboards, wound dressings, and biomedical devices now contain silver nanoparticles that continuously release a low level of silver ions to provide protection against bacteria.