Hydroxyapatite (HA or HAp) is a highly frequented bioactive ceramic for medical purposes due to its similar structure to bone material. The ultrasonically assisted synthesis (sono-synthesis) of hydroxyapatite is a successful technique to produce nanostructured HAp at highest quality standards. The ultrasonic route allows to produce nano-crystalline HAp as well as modified particles, e.g. core-shell nanospheres, and composites.

Hydroxylapatite or hydroxyapatite (HAp, also HA) is a naturally occurring mineral form of calcium apatite with the formula Ca5(PO4)3(OH). To denote that the crystal unit cell comprises two entities, it is usually written Ca10(PO4)6(OH)2. Hydroxylapatite is the hydroxyl endmember of the complex apatite group. The OH- ion can be replaced by fluoride, chloride or carbonate, producing fluorapatite or chlorapatite. It crystallizes in the hexagonal crystal system. HAp is known as bone material as up to 50 wt% of bone is a modified form of hydroxyapatite.
In medicine, nanostructured porous HAp is an interesting material for artificial bone application. Due to its good biocompatibility in bone contact and its similar chemical composition to bone material, porous HAp ceramic has found enormous use in biomedical applications including bone tissue regeneration, cell proliferation, and drug delivery.
„In bone tissue engineering it has been applied as filling material for bone defects and augmentation, artificial bone graft material, and prosthesis revision surgery. Its high surface area leads to excellent osteoconductivity and resorbability providing fast bone ingrowth.“ [Soypan et al. 2007] So, many modern implants are coated with hydroxylapatite.
Another promising application of microcrystalline hydroxylapatite is its use as “bone-building” supplement with superior absorption in comparison to calcium.
Beside its use as repair material for bone and teeth, other applications of HAp can be found in catalysis, fertilizer production, as compound in pharmaceutical products, in protein chromatography applications, and water treatment processes.

Sonication is described as a process where an acoustic field is used, which is coupled to a liquid medium. The ultrasound waves propagate in the liquid and produce alternating high pressure/ low pressure cycles (compression and rarefaction). During the rarefaction phase emerge small vacuum bubbles or voids in the liquid, which grow over various high pressure/ low pressure cycles until the bubble cannot absorb no more energy. At this phase, the bubbles implodes violently during a compression phase. During such bubble collapse a large amount of energy is released in form of a shock waves, high temperatures (approx. 5,000K) and pressures (approx. 2,000atm). Furthermore, these „hot spots“ are characterized by very high cooling rates. The implosion of the bubble also results in liquid jets of up to 280m/s velocity. This phenomenon is termed cavitation.
When these extreme forces, which are generated during the collapse oft he cavitation bubbles, expand in the sonicated medium, particles and droplets are affected – resulting in interparticle collision so that the solid shatter. Thereby, particle size reduction such as milling, deagglomeration, and dispersion are achieved. The particles can be diminuted to submicron- and nano-size.
Beside of the mechanical effects, the powerful sonication can create free radicals, shear molecules, and activate particles surfaces. These phenomenon is known as sonochemistry.

An ultrasonic treatment of the slurry results in very fine particles with even distribution so that more nucleation sites for precipitation are created.
HAp particles synthesized under ultrasonication show a decreased level of agglomeration. The lower tendency to agglomeration of ultrasonically synthesized HAp was confirmed e.g. by FESEM (Field Emission Scanning Electron Microscopy) analysis of Poinern et al. (2009).

Ultrasound assists and promotes chemical reactions by ultrasonic cavitation and its physical effects that directly influence particle morphology during the growth phase. The main benefits of ultrasonication resulting the preparation of superfine reaction mixtures are

A 40 mL solution of 0.32M Ca(NO3)2 · 4H2O was prepared in a small beaker. The solution pH was then adjusted to 9.0 with approximately 2.5mL NH4OH. The solution was sonicated with the UP50H at 100% amplitude setting for 1 hour.
At the end of the first hour a 60 mL solution of 0.19M [KH2PO4] was then slowly added dropwise into the first solution while undergoing a second hour of ultrasonic irradiation. During the mixing process, the pH value was checked and maintained at 9 while the Ca/P ratio was maintained at 1.67. The solution was then filtered using centrifugation (~2000 g), after which the resultant white precipitate was proportioned into a number of samples for heat treatment.
The presence of ultrasound in the synthesis procedure prior to the thermal treatment has a significant influence in forming the initial nano-HAP particle precursors. This is due to the particle size being related to nucleation and the growth pattern of the material, which in turn is related to the degree of super saturation within the liquid phase.
In addition, both the particle size and its morphology can be directly influenced during this synthesis process. The effect of increasing the ultrasound power from 0 to 50W showed that it was possible to decrease the particle size prior to thermal treatment.
The increasing ultrasound power used to irradiate the liquid indicated that greater numbers of bubbles/cavitations were being produced. This in turn produced more nucleation sites and as a result the particles formed around these sites are smaller. Furthermore, particles exposed to longer periods of ultrasonic irradiation show less agglomeration. Subsequent FESEM data has confirmed the reduced particle agglomeration when ultrasound is used during the synthesis process.
Nano-HAp particles in the nanometer size range and spherical morphology were produced using a wet chemical precipitation technique in the presence of ultrasound. It was found that the crystalline structure and morphology of the resulting nano-HAP powders was dependent upon the power of the ultrasonic irradiation source and the subsequent thermal treatment used. It was evident that the presence of ultrasound in the synthesis process promoted the chemical reactions and physical effects that subsequently produced the ultrafine nano- HAp powders after thermal treatment. 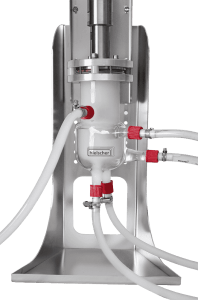 Sonication in an ultrasonic reactor chamber 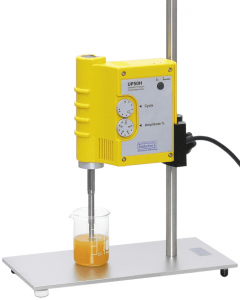 Due to its brittleness, the application of pure HAp is limited. In material research, many efforts have been made to modify HAp by polymers since the natural bone is a composite mainly consisted of nano-sized, needle-like HAp crystals (accounts for about 65wt% of bone). The ultrasonically assisted modification of HAp and synthesis of composites with improved material characteristics offers manifold possibilities (see a few examples below).

In the study of Poinern et al. (2009), a Hielscher UP50H probe-type ultrasonicator was successfully used for the sono-synthesis of HAp. With increase of ultrasound energy, the particles size of the HAp crystallites decreased. Nanostructured hydroxyapatite (HAp) was prepared by an ultrasonically assisted wet-precipitation technique. Ca(NO3) and KH25PO4 werde used as the main material and NH3 as the precipitator. The hydrothermal precipitation under ultrasonic irradiation resulted in nano-sized HAp particles with a spherical morphology in the nano metre size range (approx. 30nm ± 5%). Poinern and co-workers found the sono-hydrothermal synthesis a economic route with strong scale-up capability to commercial production.

Brundavanam and co-workers have successfully prepared a gelantine-hydroxyapatite (Gel-HAp) composite under mild sonication conditions. For the preparation of gelantine-hydroxyapatite, 1g of gelatine has been completely dissolved in 1000mL MilliQ water at 40°C. 2mL of the prepared gelatine solution was then added to the Ca2+/NH3 mixture. The mixture was sonicated with an UP50H ultrasonicator (50W, 30kHz). During the sonication, 60mL of 0.19M KH2PO4 were drop-wisely added to the mixture.
The whole solution was sonicated for 1h. The pH value was checked and maintained at pH 9 at all times and the Ca/P ratio was adjusted to 1.67. Filtration of the white precipitate was achieved by centrifugation, resulting in a thick slurry. Different samples were heat-treated in a tube furnace for 2h at a temperatures of 100, 200, 300 and 400°C. Thereby, a Gel–HAp powder in granular form were obtained, which was grinded to a fine powder and characterized by XRD, FE-SEM and FT-IR. The results show that mild ultrasonication and presence of gelatine during the growth phase of the HAp promote lower adhesion – thereby resulting in a smaller and forming a regular spherical shape of the Gel–HAp nano-particles. The mild sonication assists the synthesis of nano-sized Gel–HAp particles due to ultrasonic homogenization effects. The amide and carbonyl species from the gelatine subsequently attach to the HAp nano-particles during the growth phase via sonochemically assisted interaction.
[Brundavanam et al. 2011]

Deposition of HAp on Titanium Platelets

Ozhukil Kollatha et al. (2013) have coated Ti plates with hydroxyapatite. Before the deposition, the HAp suspension was homogenized with an UP400S (400 watts ultrasonic device with ultrasonic horn H14, sonication time 40 sec. at 75% amplitude).

Ignatev and co-workers (2013) developed a biosynthetic method where silver nanoparticles (AgNp) were deposited on HAp to obtain a HAp coating with antibacterial properties and to decrease the cytotoxic effect. For the deagglomeration of the silver nanoparticles and for their sedimentation on the hydroxyapatite, a Hielscher UP400S was used. 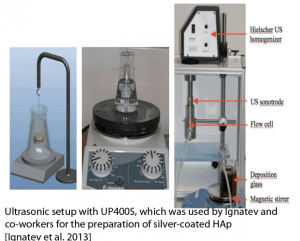 Our powerful ultrasonic devices are reliable tools to treat particles in the sub micron- and nano-sized range. Whether you want to synthesize, disperse or functionalize particles in small tubes for research purpose or you need to treat high volumes of nano-powder slurries for commercial production – Hielscher offers the suitable ultrasonicator for your requirements! 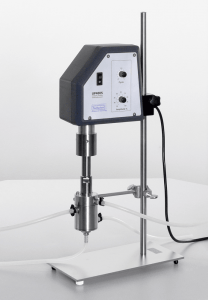