Catalysis is process in which the rate of a chemical reaction is increased (or decreased) by means of a catalyst. The production of many chemicals involves catalysis. The influence on the reaction rate depends on the frequency of contact of the reactants in the rate-determining step. In general, catalysts increase the reaction rate and lower the activation energy by providing an alternative reaction pathway to the reaction product. For this the catalysts react with one or more reactants to form intermediates that subsequently give the final product. The latter step regenerates the catalyst. By lowering the activation energy, more molecular collisions have the energy needed to reach the transition state. In some cases catalysts are used change the selectivity of a chemical reaction.

The diagram to the right illustrates the effect of a catalyst in a chemical reaction X+Y to produce Z. The catalyst provides an alternative pathway (green) with a lower activation Energy Ea.

Acoustic wavelength in liquids range from approx. 110 to 0.15mm for frequencies between 18kHz and 10MHz. This is significantly above molecular dimensions. For this reason, there is no direct coupling of the acoustic field with molecules of a chemical species. The effects of ultrasonication are to a large degree a result of the ultrasonic cavitation in liquids. Therefore, ultrasonically assisted catalysis requires at least one reagent to be in liquid phase. Ultrasonication contributes to heterogeneous and homogeneous catalysis in many ways. Individual effects can be promoted or reduced adapting the ultrasonic amplitude and liquid pressure.

Chemical reactions involving reagents and a catalyst of more than one phase (heterogeneous catalysis) are limited to the phase boundary as this is the only place, where the reagent as well as the catalyst are present. Exposure of the reagents and of the catalyst to each other is a key factor for many multi-phase chemical reactions. For this reason, the specific surface area of the phase boundary becomes influential for the chemical rate of reaction.

Ultrasonication is a very effective means for the dispersion of solids and for the emulsification of liquids. By reducing the particle/droplet size, the total surface area of the phase boundary increases at the same time. The graphic to the left shows the correlation between particle size and surface area in case of spherical particles or droplets (Click for larger view!). As the phase boundary surface increases so does the chemical reaction rate. For many materials ultrasonic cavitation can make particles and droplets of very fine size – often significantly below 100 nanometers. If the dispersion or emulsion becomes at least temporarily stable, the application of ultrasonics may be required only at an initial phase of the chemical reaction. An inline ultrasonic reactor for the initial mixing of the reagents and the catalyst can generate fine size particles/droplets in very short time and at high flow rates. It can be applied even to highly viscous media.

When reagents react at a phase boundary, the products of the chemical reaction accumulate at the contact surface. This blocks other reagent molecules from interacting at this phase boundary. Mechanical shear forces caused by cavitational jet streams and acoustical streaming result in turbulent flow and material transport from and to particle or droplet surfaces. In the case of droplets, the high shear can lead to the coalescence and subsequent formation of new droplets. As the chemical reaction progresses over time, a repeated sonication, e.g. two-stage or recirculation, may be required to maximize the exposure of the reagents.

Cavitational erosion on particle surfaces generates unpassivated, highly reactive surfaces. Short-lived high temperatures and pressures contribute to molecular decomposition and increase the reactivity of many chemical species. Ultrasonic irradiation can be used in the preparation of catalysts, e.g. to produce aggregates of fine-size particles. This produces amorphous catalysts particles of high specific surface area. Due to this aggregate structure, such catalysts can be separated from the reaction products (i.e. by filtration).

Often catalysis involves unwanted by-products, contaminations or impurities in the reagents. This can lead to degradation and fouling on the surface of solid catalysts. Fouling reduces the exposed catalyst surface and therefore reduces its efficiency. It needs no be removed either during the process or in recycling intervals using other process chemicals. Ultrasonication is an effective means to clean catalysts or assist the catalyst recycling process. Ultrasonic cleaning is probably the most common and known application of ultrasonics. The impingement of cavitational liquid jets and shock waves of up to 104atm can create localized shear forces, erosion and surface pitting. For fine size particles, high speed inter-particle collisions lead to surface erosion and even grinding and milling. These collisions can cause local transient impact temperatures of approx. 3000K. Suslick demonstrated, that ultrasonication effectively removes surface oxide coatings. The removal of such passivating coatings dramatically improves reaction rates for a wide variety of reactions (Suslick 2008). The application of ultrasonics helps to lower the fouling problem of a solid dispersed catalyst during catalysis and contributes to the cleaning during the catalyst recycling process.

such as the catalytic transesterification for the production of methylesters (i.e. fatty methylester = biodiesel). 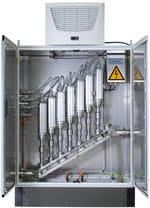 Hielscher manufactures ultrasonic devices for the use at any scale and for a variety of processes. This includes lab sonication in small vials as well as industrial reactors and flow cells. For initial process test in lab scale the UP400S (400 watts) is very suitable. It can be used for batch processes as well as for inline sonication. For process testing and optimization before scale up, we recommend using the UIP1000hd (1000 watts), as this units is very adaptable and results con be scaled linear to any larger capacity. For full scale production we offer ultrasonic devices of up to 10kW and 16kW ultrasonic power. Clusters of several such units provide very high processing capacities.

We will be glad to support your process testing, optimization and scale up. Talk to us about suitable equipment or visit our process laboratory. 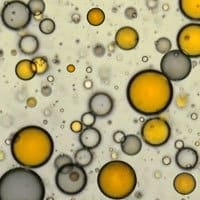