Saponification is the chemical process of soap making. It is the reaction in which the raw material of fats or oils (triglycerides) react with an alkali reactant in order to form soap. Ultrasonication improves the phase transfer catalysis resulting in increased reaction speed, more complete conversion and avoids the excessive use of base reagents such as potassium hydroxide (KOH) or sodium hydroxide (NaOH). The ultrasonically initiated alkaline hydrolysis can be easily implemented in commercial soap manufacturing. Ultrasonic reactors for saponification produce higher output in shorter time without using any catalyst or reducing the amounts of catalyst used.

The Advantages of Ultrasonic Saponification 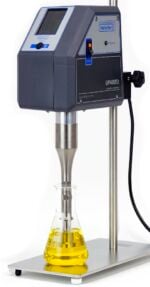 Mercantili et al. (2013) studied the effects of ultrasonication on the alkaline hydrolysis of triglycerides, known as saponification. They used sonication to initiate the alkaline hydrolysis of sunflower oil. Potassium hydroxide (KOH) was used as alkali base. It was shown that ultrasound is effective as a power source to initiate and drive the reaction, that a high reaction yield is achievable in only 15 min of total power application while working at ambient temperature, and that no detectable by‐products are generated during the reaction. The comparison of an ultrasonic bath and a probe-type ultrasonocator shows the ultrasonic probe to be the superior technique. The study demonstrates that ultrasonic saponification yields in a good conversion without the need for excess alkali or phase transfer catalysis. 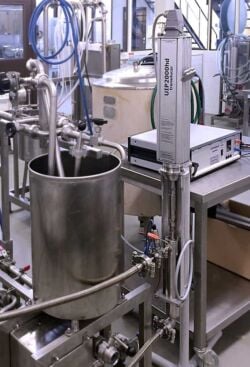 Bhatkhande et al. (1998) showed that sonication of vegetable oils such as soybean oil could be efficiently saponified using aqueous KOH and different PTCs at room temperature. The extent of saponification was studied using the saponification value as a reference. Optimizations of various parameters such as time, selection of phase transfer catalysts, quantity of catalyst used, quantity of KOH and quantity of water were carried out using sonication and stirring. To study the effect of ultrasound, the saponification was also carried out at 35ºC under different conditions, namely stirring, sonication, stirring and sonication, and heating at 100ºC. It was found that the heterogeneous liquid-liquid phase saponification of different vegetable oils using aqueous KOH/CTAB was significantly accelerated at 35ºC under sonication and stirring.

Hielscher Ultrasonics supplies high-performance ultrasonic equipment for lab, pilot and industrial production. The robust and reliable ultrasonicators are used for various sonochemical reactions such as saponification. Hielscher’s probe-type ultrasonicators can be used in batch and inline mode. All important process parameters – amplitude, pressure, temperature – can be precisely controlled and ensure reproducible results.

The digital control automatically records the process parameters and store them on the integrated SD-card. Pre-settings and remote browser control make the sonication process very simple and user-friendly.
For many sonochemical reactions a certain temperature must be maintained, so temperature control is important. Hielscher’s digital ultrasonicators come with a thermo-couple and temperature control. Jacketed flow cell allow for heat dissipation.
The robustness of Hielscher’s ultrasonic equipment allows for 24/7 operation at heavy duty and in demanding environments.
The table below gives you an indication of the approximate processing capacity of our ultrasonicators:

Power ultrasound is applied to chemical processes such as synthesis and catalysis (also called sono-synthesis and sono-catalysis, respectively) in order to initiate and intensify the reaction. Various applications of ultrasonic irradiation in organic synthesis have been in depth investigated and developed for industrial production. Sonochemical treatments can increase the rate of reaction, yield and selectivity of desired products under significantly milder condition. This makes the ultrasonic treatment an effective and environmental-friendly processing technique. Ultrasonically assisted phase transfer catalysis (PTC) is proven to be a drastically more efficient and effective method for organic reactions compared to the same reaction at silence condition. For example, the Cannizarro reaction catalyzed by an ultrasonically-assisted phase transfer catalysis is significantly sped up resulting in a rapid conversion. Another prominent example is the transesterification of triglycerides (i.e. vegetable oils, animal fats) and methanol in presence of KOH as catalyst and power ultrasound. The ultrasonic transesterification yields in high-quality biodiesel produced in a rapid conversion and a very efficient, economical process.

Saponification describes the chemical reaction that produces soap. In the saponification process, vegetable oils or animal fats are converted into fatty acid salts – the “soap” – and glycerol, which is an alcohol. The reaction requires a solution of an alkali base (e.g., NaOH or KOH) in water and also heat to initiate the reaction.
The reaction steps of saponification are the following:

The saponification reaction is used commercially to produce soaps and lubricants.
While sodium hydroxide hard soap and potassium hydroxide soft soap are used for everyday cleaning, there are also special soaps produced using other metal hydroxides. For example, lithium soaps and calcium soaps are used as lubricating greases. There are also “complex soaps” consisting of a mixture of metallic soaps.

Hydrolysis involves the reaction of an organic chemical with water to form two or more new substances and usually means the cleavage of chemical bonds by the addition of water. Esters can be cleaved back into a carboxylic acid and an alcohol by reaction with water and a base. Soap is produced by the hydrolysis of the esters of fat or oil.