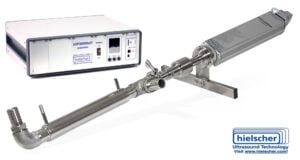 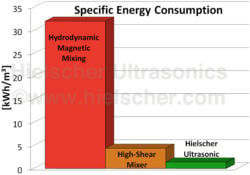 Ultrasonic mixing reactors can be easily integrated into any new installation as well as retro-fitted into existing biodiesel plants. The integration of a Hielscher ultrasonic mixer turns any biodiesel facility into a high-performance production plant. Simple installation, robustness and user-friendliness (no specific training for operation required) allow for the upgrade of any facility to a highly efficient biodiesel plant. Below, we present you with scientifically proven results of advantages documented by independent third parties. The numbers prove the superiority of ultrasonic biodiesel mixing over any conventional stirring technique. 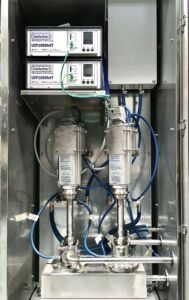 Gholami et al. (2021) present in their comparative study the advantages of ultrasonic transesterification over mechanical stirring (i.e., blade mixer, impeller, high shear mixer).
Investment costs: The ultrasonic processor and reactor UIP16000 can produce 192–384 t biodiesel/d with an footprint of only 1.2m x 0.6m. In comparison, for mechanical stirring (MS) a much larger reactor is required due to the long reaction time in the mechanical strirrng process, which causes the reactor cost to increase significantly. (cf. Gholami et al., 2020)
Processing costs: The processing costs for ultrasonic biodiesel production are 7.7% lower than those for the stirring process, mainly because of the lower total investment for the sonication process. The cost of chemicals (catalyst, methanol/alcohol) is the third-largest cost driver in both processes, sonication and mechanical stirring. However, for ultrasonic biodiesel conversion the costs for chemical are significantly lower than for the mechanical stirring. The cost fraction for chemicals accounts for approx. 5% of the final biodiesel cost. Due to the lower consumption of methanol, sodium hydroxide, and phosphoric acid, the cost for chemicals in the ultrasonic biodiesel process is 2.2% lower than that of the mechanical stirring process.
Energy costs: The energy consumed by the ultrasonic mixing reactor is approximately three times lower than that by the mechanical stirrer. This considerable reduction in energy consumption is a product of the intense micro-mixing and reduced reaction time, resulting from the production and collapse of countless cavities, which characterize the phenomenon of acoustic / ultrasonic cavitation (Gholami et al., 2018). In addition, compared to the conventional stirrer, energy consumption for methanol recovery and biodiesel purification stages during the ultrasonic mixing process is reduced by 26.5% and 1.3%, respectively. This decline is due to the lower amounts of methanol entering these two distillation columns in the ultrasonic transesterification process.
Waste disposal costs: Ultrasonic cavitation technology also remarkably reduces the cost of waste disposal. This cost in the sonication process is roughly one-fifth of that in the stirring process, resulting from the significant decrease in waste production due to higher reactor conversion and lower amounts of consumed alcohol.
Environmental-friendliness: Due to the very high overall efficiency, the reduced chemical consumption, lower energy requirements and reduced waste, ultrasonic biodiesel production is significantly more environmental-friendly than conventional biodiesel manufacturing processes. 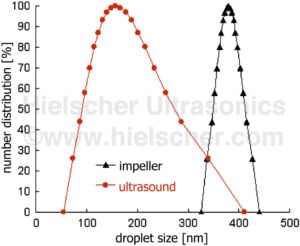 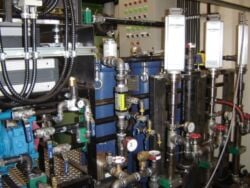 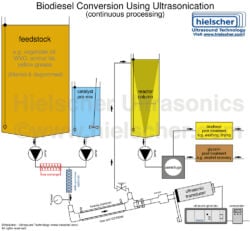 Use the Catalyst of Your Choice

Ultrasonic transesterification process of biodiesel has been proven as efficient using both alkaline or basic catalysts. Forinstance, Shinde and Kaliaguine (2019) compared the efficiency of ultrasonic and mechnical blade mixing using various catalysts, namely sodium hydroxide (NaOH), potassium hydroxide (KOH), (CH3ONa), tetramethyl ammonium hydroxide and four guanidines (Propyl-2,3-dicyclohexyl guanidine (PCHG), 1,3-dicyclohexyl 2 n-octyl guanidine (DCOG), 1,1,3,3-tetramethyl guanidine(TMG), 1,3-diphenyl guanidine (DPG)). Ultrasonic mixing (at 35º) as shown superior for biodiesel production excelling mechanical mixing (at 65º) by higher yields and conversion rate. The efficiency of mass transfer in the ultrasound field enhanced the rate of transesterification reaction as compared with mechanical stirring. Sonication outperformed mechanical stirring for all tested catalysts. Running the transesterification reaction with ultrasonic cavitation is an energy efficient and industrially viable alternative for biodiesel production. Besides the widely used catalysts KOH and NaOH, both guanidine catalysts, propyl-2,3 dicyclohexylguanidine (PCHG) and 1,3-dicyclohexyl 2 n-octylguanidine (DCOG), have both been shown as interesting altrnatives for biodiesel conversion.
Mootabadi et al. (2010) investigated ultrasonic-assisted biodiesel synthesis from palm oil using diverse alkaline metal oxide catalysts such as CaO, BaO and SrO. The activity of the catalyst in ultrasonic-assisted biodiesel synthesis was compared with the traditional magnetic stirring process, and it was found that the ultrasonic process showed 95.2% of yield using BaO within 60 min reaction time, which otherwise take 3–4 h in the conventional stirring process. For ultrasonically-assisted transesterification at optimum conditions, 60 min was required to achieve 95% yield compared to 2–4 h with conventional stirring. Also, the yields achieved with ultrasound in 60 min increased from 5.5% to 77.3% using CaO as catalysts, 48.2% to 95.2% using SrO as catalysts, and 67.3% to 95.2 using BaO as catalysts.

For small and medium size biodiesel production of up to 9ton/hr (2900 gal/hr), Hielscher offers you the UIP500hdT (500 watts), UIP1000hdT (1000 watts), UIP1500hdT (1500 watts), and UIP2000hdT (2000 watts) ultrasonic high-shear mixer models. These four ultrasonic reactors are very compact, easy to integrate or retro-fit. They are built for heavy duty operation in harsh environments. Below you will find recommended reactor setups for a range of production rates.