Biodiesel is synthesized via transesterification using a base-catalyst. However, if the raw material such as low-grade waste vegetable with a high free fatty acid content are used, a chemical pre-treatment step of esterification using an acid-catatlyst is required. Ultrasonication and its sonochemical and sonomechanical effects contribute to both reaction types and increase the efficiency of biodiesel conversion dramatically. Ultrasonic biodiesel production is significantly faster than the conventional biodiesel synthesis, results in higher biodiesel yield and quality and saves reagents such as methanol and catalyst.

For biodiesel, fatty acid esters are produced by transesterification of vegetable oils as well as of animal fats (e.g., tallow). During the transesterification reaction, the glycerol component is replaced by another alcohol, such as methanol. Feedstocks with a high content of free fatty acids, e.g. waste vegetable oils (WVO), require a pre-treatment of acid esterification in order to avoid soap formation. This acid catalysis process is a very slow reaction, when carried out as conventional batch method. The solution for accelerating the slow esterification process is the application of power ultrasound. Sonication achieves a significant improvement in reaction speed, conversion and biodiesel yield as the sonochemical effects of high-power ultrasound promote and intensify the acid catalysis. Ultrasonic cavitation provides sonomechanical forces, i.e. high-shear mixing, as well as sonochemical energy. These both types of ultrasonic impact (sonomechanical and sonochemical) turn the acid-catalyzed esterification into a fast reaction requiring less catalyst. 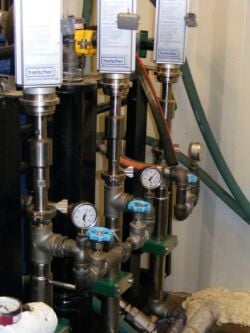 How Does Ultrasonic Biodiesel Conversion Work?

Ultrasonication between different phases in the transesterification (also sometimes called alcoholysis ) and esterification is based on the enhancement of mixing as well as on an increased heat and mass transfer. Ultrasonic mixing is based on the principle of acoustic cavitation, which occurs as result of imploding vacuum bubbles in the liquid. Acoustic cavitation is characterized by high-shear forces and turbulences, as well as very high pressure and temperature differentials. These forces promote the chemical reaction of transesterification / esterification and intensify mass and heat transfer, thereby improving the reaction of biodiesel conversion significantly.
The application of ultrasonics during biodiesel conversion has been scientifically and industrially proven to improve process efficiency. The improvement in process efficiency can be attributed to reduced energy consumption and operating costs, and the reduced use of alcohol (i.e., methanol), less catalyst, and significantly shortened reaction time. Energy cost for heating are eliminated since there is no requirement for external heating. Additionally, phase separation between biodiesel and glycerol is simpler with a shorter phase separation time. An important factor for the commercial use of ultrasound in biodiesel production is the simple scale-up to any volume, the reliable and safe operation as well as the robustness and reliability of the ultrasonic equipment (industrial standard, capable to run continuously 24/7/365 under full load). 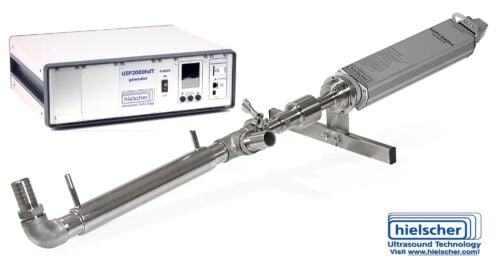 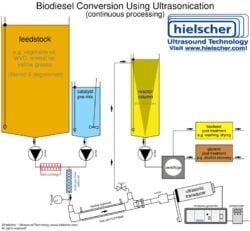 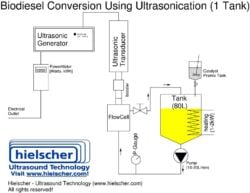 Ultrasonic esterification and transesterification can be run as batch or continuous inline process. This chart shows the ultrasonic batch process for biodiesel conversion.

For feedstocks with a high FFA content, the biodiesel production is carried out as acid or base-catalyzed reaction in a two stage process. Ultrasound contributes two both types of reactions, the acid-catalyzed esterification as well as the base-catalyzed transesterification:

To treat an excess of free fatty acids in the feedstock, the process of esterification is needed. Sulfuric acid is commonly used as acid catalyst.

The feedstock, which now has only small amounts of FFAs, can be directly fed to the transesterification stage. Most commonly sodium hydroxide or potassium hydroxide (NaOH, KOH) is used as base catalyst.

Methanol is a key component during biodiesel production. The ultrasonically driven biodiesel conversion allows for a significantly reduced use of methanol. If you are now thinking “I don’t care about my methanol use, since I recover it anyway”, you might re-think and consider the exorbitant high energy cost that apply for the evaporation step (e.g. using a distillation column), which is necessary to separate and recycle the methanol.
Methanol is usually removed after the biodiesel and glycerin have been separated into two layers, preventing reaction reversal. The methanol is then cleaned and recycled back to the beginning of the process. Producing biodiesel via ultrasonically-driven esterification and transesterification, you are able to reduce your methanol use dramatically, thereby reducing the exorbitant high energy expenditure for methanol recovery. The use of Hielscher ultrasonic reactors reduces the required amount excess methanol by up to 50%. A molar ratio between 1:4 or 1:4.5 (oil : methanol) is sufficient for most feedstock, when using Hielscher ultrasonic mixing. 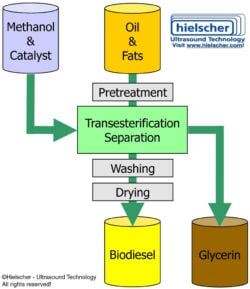 Ultrasonic esterification is a pretreatment step, which reduced low-grade feedstock high in FFAs into esters. In the 2nd step of ultrasonic transesterification, the triglycerides are converted into biodiesel (FAME).

Numerous researcher group have investigated the mechanism and effects of ultrasonic transesterification of biodiesel. For instance, the research team of Sebayan Darwin demonstrated that ultrasonic cavitation increased the chemical activity and reaction rate resulting in a significantly increased ester formation. The ultrasonic technique reduced the transesterification reaction time to 5 minutes – in comparison to 2 hours for mechanical stirring processing. Conversion of triglyceride (TG) to FAME under ultrasonication obtained 95.6929%wt with a methanol to oil molar ratio of 6:1 and 1%wt sodium hydroxide as catalyst. (cf. Darwin et al. 2010)

Hielscher Ultrasonics’ supplies small to mid-size as well as large scale industrial ultrasonic processors for the efficient production of biodiesel at any volume. Offering ultrasonic system at any scale, Hielscher can offer the ideal solution for both small producers and large companies. Ultrasonic biodiesel conversion can be operated as batch or as continuous inline process. The installation and operation is simple, safe and gives reliably high outputs of superior biodiesel quality.
Below you will find recommended reactor setups for a range of production rates.

Biodiesel is produced when trigycerides are converted into free fatty methyl ester (FAME) via a chemical reaction known as transesterification. During the reaction of transesterification, trigylcerides in vegetable oils or animal fats react in presence of a catalyst (e.g., potassium hydroxide or sodium hydroxide) with a primary alcohol (e.g., methanol). In this reaction, alkyl esters are formed from from the feedstock of vegetable oil or animal fat. Triglycerides are glycerides, in which the glycerol is esterfied with long chain acids, known as fatty acids. These fatty acids are abundantly present in vegetable oil and animal fats. Since biodiesel can be produced from various different feedstocks such as virgin vegetable oils, waste vegetable oils, used frying oils, animal fats such as tallow and lard, the amount of free fatty acids (FFAs) can vary heavily. The percentage of free fatty acids of the triglycerides is a crucial factor that influences the biodiesel production process and the resulting biodiesel quality drastically. A high amount of free fatty acids can interfere with the conversion process and deteriorate the final biodiesel quality. The main problem is that free fatty acids (FFAs) react with alkali catalysts resulting in the formation of soap. Soap formation subsequently causes glycerol separation problems. Therefore, feedstocks containing high amounts of FFAs mostly require a pretreatment ( a so-called esterification reaction), during which the FFAs are transformed into esters. Ultrasonication promotes both reactions, transesterification and esterification.

Esterification is the process of combining an organic acid (RCOOH) with an alcohol (ROH) to form an ester (RCOOR) and water.

Methanol Use in Acidic Esterification

When acid esterification is used to reduce FFAs in feedstock, the immediate energy requirements are relatively low. However, water is created during the esterification reaction – creating wet, acidic methanol, which must be neutralized, dried and recovered. This methanol recovery process is expensive.
If starting feedstocks have 20 to 40 % or even higher percentages of FFAs, multiple steps may be necessary in order to bring them down to acceptable levels. This means, even more acidic, wet methanol is created. After neutralizing the acidic methanol, drying requires multistage distillation with significant reflux rates, resulting in very high energy use.