Polyols are synthetic esters produced mainly via a transesterification of triglycerides from vegetable oils or animal fats. These polyols are raw material for the production of polyurethans, biolubricants and other cemicals. Ultrasonication is used to enhance transesterification reactions by applying intense shear forces and thermal energy. Ultrasound and its sonochemical effects supply reaction energy and help to overcome mass transfer limitations. Thereby, sonication significantly improves transesterification speed, yield, and overall efficiency.

Plant derived fatty acids, i.e. vegetable oils, are a widely available and renewable raw material and can be used for the preparation of biobased polyols and polyurethanes. The application of power ultrasound creates favourable sonochemical effects, which significantly accelerate the catalytic reaction of transesterification. Additionally, sonication enhances the yield of synthesized polyols as the intense mixing energy of acoustic cavitation overcomes mass transfer limitation. Ultrasonic transesterification reactions are well known to run efficiently with lower alcohol and catalyst as conventional transesterification reactions. This leads to an improved overall efficiency by ultrasonication. 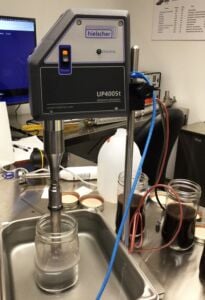 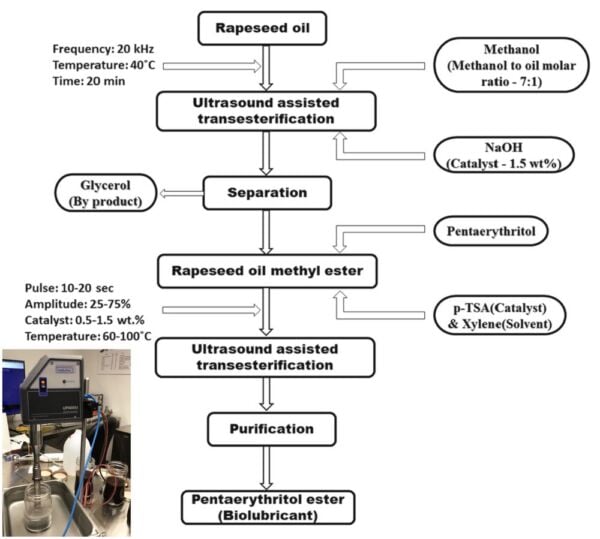 In order to produce the esters of alkyl 9,10- dihydroxystearate two steps are required and yields of 67-85% were obtained. For efficiency evaluation, the sonochemical method was compared to the conventional reflux technique. Furthermore, homogeneous and solid acid catalysts, namely sulfuric acid (H2SO4), natural bentonite, and H-bentonite, were used to determine the influence and efficiency of various catalysts. It was found that sonochemical esterification of the acid-catalyzed by H-bentonite gave products in up to 70% yield in 3 times shorter reaction time than the reflux method, which is remarkable. The final acetalization step with n-pentanal in the presence of H-bentonite using ultrasonication afforded three pentanal-derived dioxolane derivatives in 69–85% yields, which are higher than the conventional method. The reflux method required a longer reaction time than the sonochemical method since ultrasonic synthesis required only 10-30min. Additionally to the significantly shorter reaction time under sonication, a remarkable yield of each ester was obtained using the sonochemical method.
The researcher also calculated that the energy requirements of the sonochemical reaction are approx. 62-times lower than that of the conventional method. This reduces costs and is environmental-friendly.
Examination of the physicochemical properties of each product revealed that methyl 8-(2-butyl-5-octyl-1,3-dioxolan-4-yl)octanoate is a potential novel biolubricant with the functionalities to substitute common lubricants. (cf. Kurniawan et al., 2021) 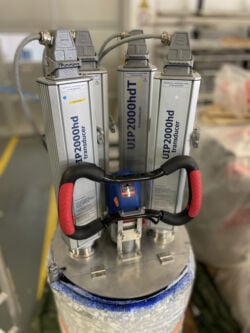 Pentaerythryl esters can be obtained from vegetable oils such sunflower, linseed, and jatropha oil. The research team of Hashem demonstrated the synthesis of biobased lubricants via a successive base-catalyzed transesterifications involving two transesterification steps. They demonstrated the feasibility of the synthesis using sunflower, linseed, and jatropha oil. In the first step, the oils were converted into the corresponding methyl esters. In the second process, the methyl esters were converted into pentaerythryl esters by the action of pentaerythritol as shown in the following scheme: (cf. Hashem et al., 2013) 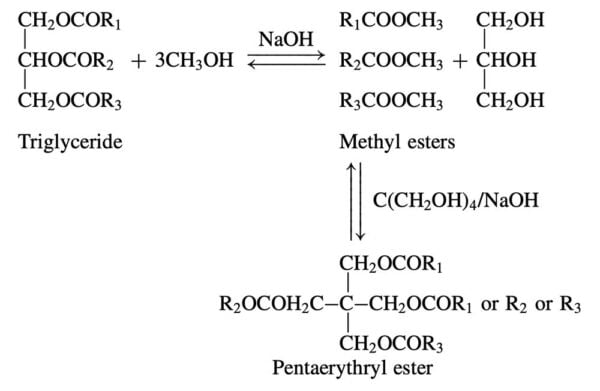 After transesterification of vegetable oil to methyl ester, the methyl esters are converted into pentaerythryl esters by the action of pentaerythritol as shown in the scheme above. (cf. Hashem et al., 2013)

Ultrasonic Probes and Reactors for Transesterification and other Chemical Syntheses

Hielscher Ultrasonics is your specialist when it comes to sophisticated high-performance ultrasonicators for sonochemical reactions. Hielscher designs, manufactures, and distributes high-power ultrasonicators and accessories such as probes (sonotrodes), reactors, and flow cells at any size and supplies chemical laboratories as well as chemical production facilities on industrial scale. From compact lab ultrasonic devices to industrial ultrasonic probes and reactors, Hielscher has the ideal ultrasonic system for your process. With long-time experience in applications such as sono-catalysis and sono-synthesis, our well-trained staff will recommend you the most suitable setup for your requirements.
Hielscher Ultrasonics manufactures high-performance ultrasonic systems of very high robustness and capable to deliver intense ultrasound waves since all Hielscher industrial ultrasonicators can deliver very high amplitudes in continuous operation (24/7). The robust ultrasound systems require almost no maintenance and are built to run. This makes Hielscher ultrasonic equipment reliable for heavy-duty applications under demanding conditions. Special sonotrodes for high-temperature or very harsh chemical are available too.
Highest Quality – Designed and Made in Germany: All equipment is designed and manufactured in our headquarter in Germany. Before delivery to the customer, every ultrasonic device is carefully tested under full load. We strive for customer satisfaction and our production is structured to fulfil highest quality assurance (e.g., ISO certification).

Natural oil polyols (abbrev. NOPs) or biopolyols, are polyols derived from vegetable oils. Several different chemical routes are available to synthesize biopolyols. Biopolyols are mainly used as raw materials for the production of polyurethanes, but also goes into the productions of other products such as lubricants, elastomers, adhesives, artificial leather, and coatings.
Regarding polyols synthesis from vegetable oils various reaction methods such as epoxidation, transamidization and transesterification are available. For instance, rapeseed oil based polyol can be synthesized by partial epoxidation of the double bonds in fatty acid chains and overall opening oxirane rings by using diethylene glycol. Transamidization and transesterification of ester bonds of vegetable triglycerides can be run using diethanolamine and triethanolamine, respectively.