High power ultrasound is well-known for its contribution to various chemical reactions. This is the so-called sonochemistry. Heterogeneous reactions – and especially phase transfer reactions – are highly potential application fields for power ultrasound. Due to the mechanical and sonochemical energy applied to the reagents, reactions can be get initiated, reaction speed can be significantly enhanced, as well as higher conversion rates, higher yields, and better products can be achieved. The linear scalability of ultrasound and the availability of reliable ultrasonic industrial equipment make this technique an interesting solution for chemical production.

Phase Transfer Catalysis (PTC) is a special form of heterogeneous catalysis and known as a practical methodology for organic synthesis. By using a phase transfer catalyst, it becomes possible to solubilize ionic reactants, which are often soluble in an aqueous phase but insoluble in an organic phase. This means PTC is an alternative solution to overcome the heterogeneity problem in a reaction in which the interaction between two substances located in different phases of a mixture is inhibited because of the inability of reagents to come together. (Esen et al. 2010) General advantages of phase transfer catalysis are the little efforts for preparation, simple experimental procedures, mild reaction conditions, high-reaction rates, high selectivities, and the use of inexpensive and environmentally benign reagents, such as quaternary ammonium salts, and solvents, and the possibility of conducting large scale preparations (Ooi et al. 2007).
A variety of liquid–liquid and liquid–solid reactions have been intensified and made selective by using simple phase-transfer (PT) catalysts such as quats, polyethylene glycol-400, etc., which allow ionic species to be ferried from aqueous phase to organic phase. Thus, the problems associated with extremely low solubility of the organic reactants in the aqueous phase can be overcome. In the pesticide and pharmaceutical industries, PTC is used extensively and has changed the fundamentals of business. (Sharma 2002)

The application of power ultrasound is a well-known tool to create extremely fine emulsions. In chemistry such extremely fine-size emulsions are used to enhance chemical reactions. This means that the interfacial contact area between two or more immiscible liquids becomes dramatically enlarged and provides thereby a better, more complete and/or faster course of the reaction.
For phase transfer catalysis – the same as for other chemical reactions – enough kinetic energy is needed to start the reaction.
This has various positive effects regarding the chemical reaction:

By these effects, PTC is an invaluable chemical methodology for organic synthesis from two and more immiscible reactants: Phase transfer catalysis (PTC) enables to use raw material of chemical processes more efficiently and to produce more cost-effectively. The enhancement of chemical reactions by PTC is an important tool for chemical production that can be improved by the use of ultrasound dramatically.

Picture 1: The UP200Ht is a 200 watts powerful ultrasonic homogenizer

With the aim of establishing a practical method for the asymmetric synthesis of a-amino acids and their derivatives Maruoka and Ooi (2007) investigated “whether the reactivity of N-spiro chiral quaternary ammonium salts could be enhanced and their structures simplified. Since ultrasonic irradiation produces homogenization, that is, very fine emulsions, it greatly increases the interfacial area over which the reaction can occur, which could deliver substantial rate acceleration in the liquid–liquid phase-transfer reactions. Indeed, sonication of the reaction mixture of 2, methyl iodide, and (S,S)-naphtyl subunit (1 mol%) in toluene/50% aqueous KOH at 0 degC for 1 h gave rise to the corresponding alkylation product in 63% yield with 88%ee; the chemical yield and enantioselectivity were comparable with those from a reaction carried out by simple stirring of the mixture for eight hours (0 degC, 64%, 90%ee).” (Maruoka et al. 2007; p. 4229)

Another reaction type of an asymmetric catalysis is the Michael reaction. The Michael addition of diethyl N-acetyl-aminomalonate to chalcone is positively influenced by ultrasonication which results in an increase of 12% of the yield (from 72% obtained during the silent reaction up to 82% under ultrasonication). The reaction time is six times faster under power ultrasound compared to the reaction without ultrasound. The enantiomeric excess (ee) has not changed and was for both reactions – with and without ultrasound – at 40%ee. (Mirza-Aghayan et al. 1995)
Li et al. (2003) demonstrated that the Michael reaction of chalcones as acceptors with various active methylene compounds such as diethyl malonate, nitromethane, cyclohexanone, ethyl acetoacetate and acetylacetone as donors catalyzed by KF/basic alumina results in adducts in high yield within a shorter time under ultrasound irradiation. In another study, Li et al. (2002) have shown the successful ultrasonically-assisted synthesis of chalcones catalyzed by KF-Al2O3.
These PTC reactions above show only a small range of the potential and possibilities of ultrasonic irradiation.
The testing and evaluation of ultrasound concerning possible enhancements in PTC is very simple. Ultrasonic lab devices such as Hielscher’s UP200Ht (200 watts) and bench-top systems such as Hielscher’s UIP1000hd (1000 watts) allow first trials. (see picture 1 and 2)

Using ultrasonic phase transfer catalysis you will profit from one or more various beneficial advantages: 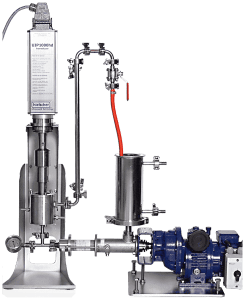 Simple and risk-free testing of Ultrasonic Effects in Chemistry

To see how ultrasound influences specific materials and reactions, first feasibility tests can be conducted in small scale. Hand-held or stand-mounted laboratory devices in the range of 50 to 400 watts allow for sonication of small- and mid-size samples in the beaker. If the first results show potential achievements, the process can developed and optimized in the bench-top with an industrial ultrasonic processor, e.g. UIP1000hd (1000W, 20kHz). Hielscher’s ultrasonic bench-top systems with 500 watts to 2000 watts are the ideal devices for R&D and optimization. These ultrasonic systems – designed for beaker and inline sonication – give full control over the most important process parameter: Amplitude, Pressure, Temperature, Viscosity, and Concentration.
The accurate control over the parameters allows for the exact reproducibility and linear scalability of the obtained results. After testing various setups, the configuration found to be best can be used to run continuously (24h/7d) under production conditions. The optional PC-Control (software interface) also facilitates the recording of the individual trials. For the sonication of flammable liquids or solvents in hazardous environments (ATEX, FM) the UIP1000hd is available in an ATEX-certified version: UIP1000-Exd.

General benefits from ultrasonication in chemistry: