Conventional tobacco extraction is a slow, time-consuming process, which involves the use of toxic solvents at high temperatures, which makes the process hazardous.

Ultrasonically-assisted extraction of alkaloids from tobacco can be run using water or mild solvents in a rapid process of a few minutes. Ultrasonically extracted alkaloids such as nicotine from tobacco are released in a rapid and highly efficient procedure, which gives high yields of a full spectrum extract (containing nicotine, nornicotine, chlorogenic acid (5-caffeoylquinic acid), rutin, caffeic acid and scopoletin, solanesol etc.).

Ultrasonic-assisted extraction (UAE) is a fast, effective, and convenient extraction method, which is based on the application of power-ultrasound. Intense ultrasonic waves generate rapid micro-movement and acoustic cavitation in solid-liquid systems (e.g vegetal material in solvent, e.g. tobacco leaves in ethanol), which results in an increased mass transfer as well as an accelerated extraction process. In comparison with other advanced extraction techniques such as supercritical fluid extraction and ion-pair extraction, ultrasonically-assisted extraction is significantly more economic, environmental-friendlier, safer and easier to use. Therefore, ultrasonic extraction is the preferred extraction technique to release bioactive compounds from botanicals.
Ultrasonic extraction results in a broad spectrum extract, containing nicotine, which is tobacco’s primary alkaloid with 94–98% of the total alkaloid content, as well as the alkaloids nornicotine, anabasine, anatabine, cotinine and myosmine. 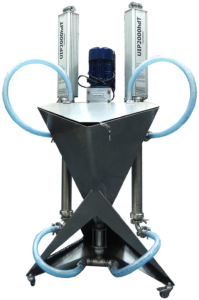 Alkaloids such as nicotine and nornicotine, chlorogenic acid, phenolics, solanesol and other bioactive compounds can be rapidly, efficient and safe isolated using ultrasonic extraction. The conventional tobacco extraction involves the use of toxic solvents such as heptane at high temperatures, which turns the extraction process into a hazardous procedure. The whole conventional extraction process takes approx. 24h and is thereby very time-consuming.
Ultrasonic extraction can be performed as cold-water extraction or using mild solvents such as ethanol or ethanol-water mixture at room temperature or slightly elevated temperatures. The sonication takes a few minutes, which turns the extraction into a rapid procedure. Furthermore, using water or mild solvents the process is completely safe and convenient.

Using ultrasonic extraction, you can select from various solvents, including water, alcohol, ethanol, methanol, ethanol-water mixtures or strong solvents such as heptane or hexane. All of the former named solvents have been already successfully tested and shown to be effective for the isolation of bioactive compounds such as alkaloids, terpenoids, phenolics and solanesol from tobacco plant materials. Sonication can be used in solvent-free cold-water extraction (e.g. to prepare organic extracts) or can be combined with a solvent of your choice.
Learn more about solvents for the ultrasonic extraction from botanicals! 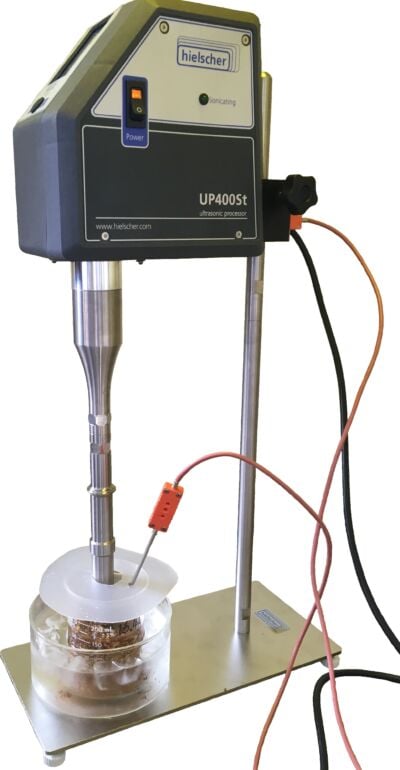 Ultrasonic processor UP400St (400 watts) for the extraction of alkaloids such as nicotine and harmala from tobacco leaves.

Hielscher’s ultrasonic equipment is a commonly extraction tool for the isolation of bioactive compounds from botanicals. Supplying ultrasonic extractors for all process scales, Hielscher is able to recommend you the most suitable ultrasonic system for your needs. Starting with compact, yet powerful lab systems for analysis and feasibility testing, Hielscher offers the full range from lab and pilot plant ultrasonicators up to fully industrial ultrasound reactors. Offering the full band width of ultrasonic processors, Hielscher has the ideal setup for your extraction process. Depending on your process volume and goal, ultrasonic extraction can be performed in batch or continuous flow mode. Manifold accessories such as sonotrodes, booster horns, flow cells and reactors allow to equip the ultrasonic processor to fulfil the process targets ideally.
Hielscher’s ultrasonic processors can be precisely controlled and process data are automatically recorded on the integrated SD-card of our digital ultrasonic systems. The reliable control over the process parameters ensure a consistently high product quality. The automatic data recording of the process parameters allow for an easy process standardization and the fulfilment of Good Manufacturing Practices (GMP).
The robustness of Hielscher’s ultrasonic equipment allows for 24/7 operation at heavy duty and in demanding environments. Easy and safe operation as well as low maintenance make Hielscher’s ultrasonic systems the reliable work horse in your production.

Contact us now for further information! Our well-trained staff will be glad to discuss your extraction process with you! 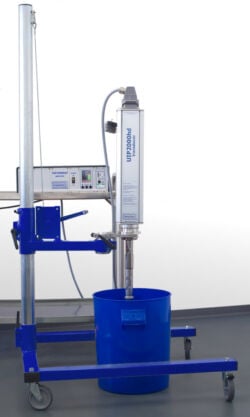