Particle structure and particle size as well as pore size and pump pressure are the most important parameters influencing the HPLC analysis.
Most HPLC systems run with the active stationary phase attached to the outside of small spherical silica particles. The particles are very small beads in the micro- and nano-range. The particle sizes of the beads vary, but a particle size of approx. 5µm is most common. Smaller particles provide a larger surface area and a better separation, but the pressure required for optimal linear velocity increases by the inverse of the particle diameter squared. This means that using particles of half the size and at the same column size, doubles the performance, but at the same time the required pressure is quadrupled.
Power ultrasound is a well known and proven tool for the modification / functionalization and dispersion of micro- and nano-particles such as silica. Due to its uniform and highly reliable results in particle processing, sonication is the preferred method to produce functionalized particles (e.g. core-shell particles). Power ultrasound creates vibration, cavitation and induces energy for sonochemical reactions. Thereby, high-power ultrasonicators are successfully used for particle treatments including functionalization / modification, size reduction & dispersion as well as for synthesis (e.g. sol-gel routes). 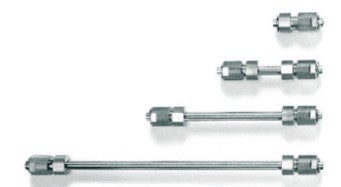 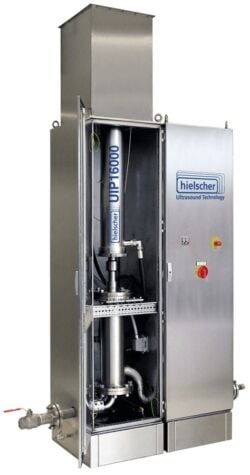 Core–shell silica particles (solid core with porous shell or superficially porous) have been increasingly used for highly efficient separation with fast flow rate and relatively low back pressure. The advantages lies in their solid core and the porous shell: The complete core-shell particle forms a larger particle and allows to operate the HPLC at a lower back pressure while the porous shell and small solid core itself provide a higher surface area for the separation process. The benefits of using core–shell particles as packing material for HPLC columns is that the smaller pore volume reduces the volume present for broadening from longitudinal diffusion. Particle size and the thickness of the porous shell have direct influence on the separation parameters. (cf. Hayes et al. 2014)
The most frequently used packing materials for packed HPLC columns are conventional silica microspheres. The core–shell particles used for chromatography are usually made of silica too, but with a solid core and a porous shell. Core–shell silica particles as used for chromatographic applications are also known as fused-core, solid core or superficially porous particles.
Silica gels can be synthesized via sonochemical sol-gel route. Silica gels are the most frequently used thin layer for the separation of active substances via thin-layer chromatography (TLC).
Click here to learn more about the sonochemical route for sol-gel processes!
The ultrasonic synthesis (sono-synthesis) can be readily applied to the synthesis of other silica-supported metals or metal oxides, such as TiO2/SiO2, CuO/SiO2, Pt/SiO2, Au/SiO2 and many others, and is used not only for silica modification for chromatographic cartridges, but also for various industrial catalytic reactions.

A fine-size dispersion and deagglomeration of particles is particularly important to obtain the full performance of the material. Thus, for high performance separation monodisperse silica particles with smaller diameters are used as packing particles. Sonication has been proven to be more effective in the dispersing of silica than other high-shear mixing methods.
The plot below shows the result of ultrasonic dispersing of fumed silica in water. The measurements were obtained using a Malvern Mastersizer 2000.

Chromatography can be described as a mass transfer process involving adsorption. High-performance liquid chromatography (formerly also known as high-pressure liquid chromatography) is an analysis technique by which each component of an mixture can be separated, identified, and quantifed. Alternatively, preparative scale chromatography used for the purification of large batches of material on production scale. Typical analytes are organic molecules, biomolecules, ions, and polymers.
The principle of HPLC separation relies on a mobile phase (water, organic solvents, etc.) being passed through a stationary phase (particulate silica packings, monoliths, etc.) in a column. This means, a pressurized liquid solvent, which contains the dissolved compounds (sample solution), is pumped through a column filled with a solid adsorbent material (e.g. modified silica particles). As each component in the sample interacts slightly differently with the adsorbent material, the flow rates for the different components vary and lead thereby to the separation of the components as they flow out the column. Composition and temperature of the mobile phase are very important parameters for the separation process influencing the interactions that happen between sample components and adsorbent. The separation is based on the partition of the compounds towards stationary and mobile phase.
The analysis results of HPLC are visualized as a chromatogram. A chromatogram is a two-dimensional diagram with the ordinate (y-axis) giving concentration in terms of detector response and the abscissa (x-axis) represents the time.

Silica particles for chromatographic applications are based on synthetic silica polymers. Mostly, they are made from tetraethoxysilane which are partially hydrolysed to polyethoxysiloxanes in order to form a viscous liquid that can be emulsified in an ethanol water mixture under continuous sonication. The ultrasonic agitation creates spherical particles, which are transformed into silica hydrogels through a catalytically induced hydrolytic condensation (known as ‘Unger’ method). The hydrolytic condensation causes extensive crosslinking via the surface silanol species. Afterwards, the hydrogel spheres are calcinated to produce a xerogel. The particle size and pore size of the highly porous silica xerogel (sol-gel) are influenced by the pH value, temperature, used catalyst and solvents as well as the silica sol concentration.

Both nonporous and porous silica microspheres are used as stationary phase in HPLC columns. For small nonporous particles, the separation occurs on the particle surface and band-broadening is alleviated because of the short diffusion path, thereby occurring a faster mass transfer. However, the low surface area results in more inexact results, since retention, retention time, selectivity and therefore resolution are limited. The loading capacity is a critical factor, too. Porous silica microspheres provide besides the particle surface additionally the pore surface, which offers more contact area to interact with analytes. To ensure sufficient mass transport during liquid phase separation, pore sizes must have a size of more than ∼7nm . To separate large biomolecules, pores sizes of up to 100nm are required to achieve an efficient separation.