Ultrafine nano-sized particles and spherical shaped particles, thin film coatings, fibers, porous and dense materials, as well extremely porous aerogels and xerogels are highly potential additives for the development and production of high performance materials. Advanced materials, including e.g. ceramics, highly porous, ultralight aerogels and organic-inorganic hybrids can be synthesized from colloidal suspensions or polymers in a liquid via the sol-gel method. The material shows unique characteristics, since the generated sol particles range in the nanometer size. Thereby, the sol-gel process is part of the nanochemistry.
In the following, the synthesis of nano-sized material via ultrasonically assisted sol-gel routes is reviewed.

Table 1: Steps of Sol-Gel synthesis and the downstream processes 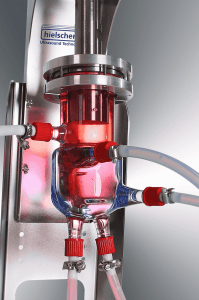 Sol-gel processes are a wet-chemical technique of synthesis for the fabrication of an integrated network (so-called gel) of metal oxides or hybrid polymers. As precursors, commonly inorganic metal salts such as metal chlorides and organic metal compounds such as metal alkoxides are used. The sol – consisting in a suspension of the precursors – transforms to a gel-like diphasic system, which consists in both a liquid and a solid phase. The chemical reactions that occur during a sol-gel process are hydrolysis, poly-condensation, and gelation.
During hydrolysis and poly-condensation, a colloid (sol), which consists in nanoparticles dispersed in a solvent, is formed. The existing sol phase transforms to the gel.
The resulting gel-phase is formed by particles which size and formation can vary greatly from discrete colloidal particles to continuous chain-like polymers. The form and size depends on the chemical conditions. From observations on SiO2 alcogels can be generally concluded that a base-catalyzed sol results in a discrete species formed by aggregation of monomer-clusters, which are more compact and highly branched. They are affected by sedimentation and forces of gravity.
Acid-catalyzed sols derive from the highly entangled polymer chains showing a very fine microstructure and very small pores that appear quite uniform throughout the material. The formation of a more open continuous network of low density polymers exhibits certain advantages with regard to physical properties in the formation of high performance glass and glass/ceramic components in 2 and 3 dimensions. [Sakka et al. 1982]
In further processing steps, by spin-coating or dip-coating it becomes possible to coat substrates with thin films or by casting the sol into a mold, to form a so-called wet gel. After additional drying and heating, a dense material will be obtained.
In further steps of the downstream process, the obtained gel can be further processed. Via precipitation, spray pyrolysis, or emulsion techniques, ultrafine and uniform powders can be formed. Or so-called aerogels, which are characterized by high porosity and an extremely low density, can be created by the extraction of the liquid phase of the wet gel. Therefore, normally supercritical conditions are required. 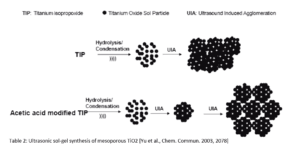 High-power, low-frequency ultrasound offers high potential for chemical processes. When intense ultrasonic waves are introduced into a liquid medium, alternating high-pressure and low-pressure cycles with rates depending on the frequency occur. High pressure cycles mean compression, whilst low frequency cycles mean rarefaction of the medium. During the low-pressure (rarefaction) cycle, high power ultrasound creates small vacuum bubbles in the liquid. These vacuum bubbles grow over several cycles.
Accordingly to the ultrasound intensity, liquid compresses and stretches to varying degrees. This means the cavitation bubbles can behave in two ways. At low ultrasonic intensities of ~1-3Wcm-2, the cavitation bubbles oscillate about some equilibrium size for many acoustic cycles. This phenomenon is termed stable cavitation. At high ultrasonic intensities (≤10Wcm-2) the cavitational bubbles are formed within a few acoustic cycles to a radius of at least twice their initial size and collapse at a point of compression when the bubble cannot absorb more energy. This is termed transient or inertial cavitation. During bubble implosion, locally so-called hot spots occur, which feature extreme conditions: During the implosion, locally very high temperatures (approx. 5,000K) and pressures (approx. 2,000atm) are reached. The implosion of the cavitation bubble also results in liquid jets of up to 280m/s velocity, which act as very high shear forces. [Suslick 1998/ Santos et al. 2009]

Sonication is an efficient tool for the synthesis of polymers. During ultrasonic dispersing and deagglomeration, the caviational shear forces, which stretch out and break the molecular chains in a non-random process, result in a lowering of the molecular weight and poly-dispersity. Furthermore, multi-phase systems are very efficient dispersed and emulsified, so that very fine mixtures are provided. This means that ultrasound increases the rate of polymerisation over conventional stirring and results in higher molecular weights with lower polydispersities.
Ormosils (organically modified silicate) are obtained when silane is added to gel-derived silica during sol-gel process. The product is a molecular-scale composite with improved mechanical properties. Sono-Ormosils are characterized by a higher density than classic gels as well as an improved thermal stability. An explanation therefore might be the increased degree of polymerization. [Rosa-Fox et al. 2002] 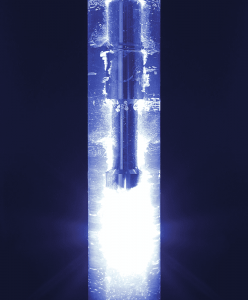 Mesoporous TiO2 is widley used as photocatalyst as well as in electronics, sensor technology and environmental remediation. For optimized materials properties, it is aimed to produce TiO2 with high crystallinity and large surface area. The ultrasonic assisted sol-gel route has the advantage that the intrinsic and extrinsic properties of TiO2, such as the particle size, surface area, pore-volume, pore-diameter, crystallinity as well as anatase, rutile and brookite phase ratios can be influenced by controlling the parameters.
Milani et al. (2011) have demonstrated the synthesis of TiO2 anatase nanoparticles. Therefore, the sol-gel process was applied to the TiCl4 precursor and both ways, with and without ultrasonication, have been compared. The results show that ultrasonic irradiation have a monotonous effect on all components of the solution made by the sol-gel method and cause the breaking of loose links of large nanometric colloids in solution. Thus, smaller nanoparticles are created. The locally occurring high pressures and temperatures break the bondings in long polymer chains as well as the weak links binding smaller particles, by which larger colloidal masses are formed. The comparison of both TiO2 samples, in presence and in absence of ultrasonic irradiation, is shown in the SEM images below (see Pic. 2). 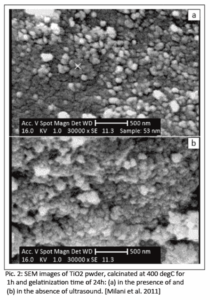 In sono-catalytically assisted sol-gel reactions, ultrasound is applied to the precursors. The resulting materials with new characteristics are known as sonogels. Due to the absence of additional solvent in combination with the ultrasonic cavitation, a unique environment for sol–gel reactions is created, which allows for the formation of particular features in the resulting gels: high density, fine texture, homogeneous structure etc. These properties determine the evolution of sonogels on further processing and the final material structure. [Blanco et al. 1999]
Suslick and Price (1999) show that the ultrasonic irradiation of Si(OC2H5)4 in water with an acid catalyst produces a silica “sonogel”. In conventional preparation of silica gels from Si(OC2H5)4, ethanol is a commonly used co-solvent due to the non-solubility of Si(OC2H5)4 in water. The use of such solvents is often problematic as they can cause cracking during the drying step. Ultrasonication provides a highly efficient mixing so that volatile co-solvents such as ethanol can be avoided. This results in a silica sono-gel characterized by a higher density than conventionally produced gels. [Suslick et al. 1999, 319f.]
Conventional aerogels consist of a low-density matrix with large empty pores. The sonogels, in contrast, have finer porosity and the pores are quite sphere-shaped, with a smooth surface. Slopes greater than 4 in the high angle region reveal important electronic density fluctuations on the pore-matrix boundaries [Rosa-Fox et al. 1990].
The images of the surface of the powder samples show clearly that using ultrasonic waves resulted in greater homogeneity in the average size of the particles and resulted in smaller particles. Due to sonication, the average particle size decreases by approx. 3 nm. [Milani et al. 2011]
The positive effects of ultrasound are proven in various research studies. E.g., report Neppolian et al. in their work the importance and advantages of ultrasonication in the modification and improvement of the photocatalytic properties of mesoporous nano-size TiO2 particles. [Neppolian et al. 2008]

Nanocoating means covering material with a nano-scaled layer or the coverage of a nano-sized entity. Thereby encapsulated or core-shell structures are obtained. Such nano composites feature physical and chemical high performance properties due to combined specific characteristics and/or structuring effects of the components.
Exemplarily, the coating procedure of indium tin oxide (ITO) particles will be demonstrated. ITO particles are coated with silica in a two-step process, as shown in a study of Chen (2009). In the first chemical step, the indium tin oxide powder undergoes a aminosilane suface treatment. The second step is the silica coating under ultrasonication. To give a specific example of sonication and its effects, the process step presented in Chen’s study, is summarized below:
A typical process for this step is as follows: 10g GPTS was mixed slowly with 20g of water acidified by hydrochloric acid (HCl) (pH = 1.5). 4g of aforesaid aminosilane treated powder was then added to the mixture, contained in a 100ml glass bottle. The bottle was then placed under the probe of the sonicator for continuous ultrasound irradiation with output power of 60W or above.
Sol-gel reaction was initiated after approximately 2-3min ultrasound irradiation, upon which white foam was generated, due to the release of alcohol upon extensive hydrolysis of GLYMO (3-(2,3-Epoxypropoxy)propyltrimethoxysilane). Sonication was applied for 20min, after which the solution was stirred for several more hours. Once the process was finished, particles were gathered by centrifuging and were washed repeatedly with water then either dried for characterization or kept dispersed in water or organic solvents. [Chen 2009, p.217]

The application of ultrasound to sol-gel processes leads to a better mixing and the particles’ deagglomeration. This results in smaller particles size, spherical, low-dimensional particle shape and enhanced morphology. So-called sono-gels are characterized by their density and fine, homogeneous structure. These features are created due to the avoidance of use of solvent during the sol formation, but also, and mainly, because of the initial cross-linked state of reticulation induced by ultrasound. After the drying process, the resulting sonogels present a particulate structure, unlike their counterparts obtained without applying ultrasound, which are filamentous. [Esquivias et al. 2004]
It has been shown that the use of intense ultrasound allows for the tailoring of unique materials from sol-gel processes. This makes high-power ultrasound a powerful tool for chemistry and materials’ research and development. 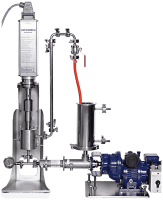