Zeolites are microporous crystalline hydrated aluminosilicates with absorbent and catalytic properties.
The application of high-performance ultrasound influences size and morphology of ultrasonically synthesized zeolite crystals and improves their crystallinity. Furthermore, crystallization time is drastically reduced using a sonochemical synthesis route. Ultrasonically-assisted zeolite synthesis routes was tested and developed for numerous zeolite types. The mechanism of ultrasonic zeolite synthesis is based on the improved mass transfer which results in an increased crystal growth rate. This increase in crystal growth rate subsequently leads to an increased nucleation rate. Additionally, sonication affects the depolymerization-polymerization equilibrium through an increase in the concentration of soluble species, which is required for the zeolite formation.
Overall, various research studies and pilot-scale production setups have proven the ultrasonic zeolite synthesis as highly efficient saving time and costs. 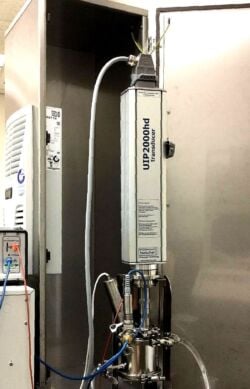 How is zeolite synthesized conventionally?

Conventional zeolite synthesis is a very time-consuming hydrothermal process, which can require reaction times from several hours to several days. The hydrothermal route is normally a batch process, where zeolites are synthesized from amorphous or soluble Si and Al sources. In an initial ageing stage, the reactive gel is composed by a structure-directing agent (SDA) and sources of aluminum and silica are aged at low temperature. During this first step of ageing, so-called nuclei are formed. These nuclei are the starting material from which in the following crystallization process the zeolite crystals grow. With the initiation of the crystallization, the temperature of the gel is raised. This hydrothermal synthesis is usually carried out in batch reactors. However, batch processes come with the drawback of labour-intense operation.

How is zeolite synthesized under sonication?

Ultrasonic synthesis of zeolite is rapid procedure to synthesize homogeneous zeolite under mild conditions. For instance, 50nm zeolite crystals were synthesized via sonochemical route at room temperature. Whilst conventional zeolite synthesis reaction a can take up to several days, the sonochemical route reduces synthesis duration to a few hours, thereby significantly reducing reaction time.
Ultrasonic crystallization of zeolite can be carried out as batch or continuous processes, which makes the application easily adaptable to the environment and process goals. Due to linear scalability, ultrasonic zeolite syntheses can be reliably transferred from initial batch process to inline processing. Ultrasonic processing – in batch and in-line – allows for superior economic efficiency, quality control and operational flexibility. 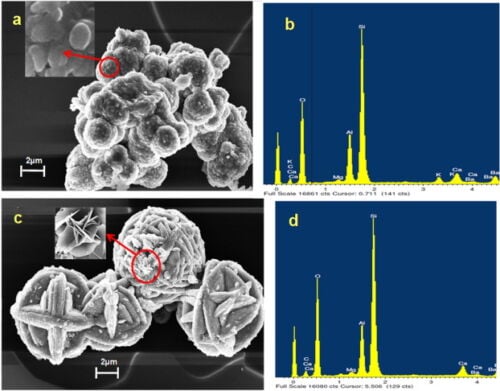 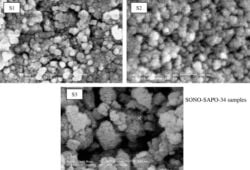 SEM images of ultrasonically synthesized SAPO-34 crystals(SONO-SAPO-34) with the ultrasonicator UP200S under various conditions.
(Click to enlarge! Study and picture: Askari and Halladj, 2012)

In the following section, we introduce various sonochemical pathways, which have been successfully used to synthesize different zeolite types. Research results consistently underline the superiority of ultrasonic zeolite synthesis.

Roy and Das (2017) synthesized 50nm lithium-containing zeolite Bikitaite crystals at room temperature using the UIP1500hdT (20kHz, 1.5kW) ultrasonicator in a batch setup. The successful sonochemical formation of Bikitaite zeolite at room temperature was confirmed by successfully synthesized lithium-containing Bikitaite zeolite by XRD and IR analysis.
When sonochemical treatment was combined with conventional hydrothermal treatment, the of phase formation of zeolite crystals was achieved at much lower temperature (100ºC) in comparison to the 300ºC for 5 days, which are typical values for conventional hydrothermal route. Sonication shows significant effects on crystallization time and phase formation of zeolite. In order to evaluate the functionality of ultrasonically synthesized Bikitaite zeolite, its hydrogen storage capacity was investigated. The storage volume increases with increasing Li content of the zeolite.
Sonochemical zeolite formation: XRD and IR analysis showed that the formation of pure, nano-crystalline Bikitaite zeolite started after 3 h ultrasonication and 72 h of ageing. Nano-sized crystalline Bikitaite zeolite with prominent peaks were obtained after 6 h sonication time at 250 W.
Advantages: The sonochemical synthesis route of lithium-containing zeolite Bikitaite offers not only the advantage of the simple production of pure nano-crystals, but also presents a rapid and cost-effective technique. The costs for ultrasonic equipment and the required energy are very low when compared to other processes. Furthermore, the duration of the synthesis process is very short, so that the sonochemical process is considered as a beneficial method for clean energy applications.
(cf. Roy et al. 2017)

Mordenite obtained with application of the ultrasonic pretreatment (MOR-U) showed a more homogeneous morphology of intergrown pellets 10 × 5 µm2 and no signs of needle-like or fibrous formations. The ultrasound-assisted procedure resulted in a material with improved textural characteristics, in particular, the micropore volume accessible for nitrogen molecules in the as-made form. In the case of ultrasonically-pretreated mordenite, altered crystal shape and more homogeneous morphology were observed.
In summary, the current study demonstrated that the ultrasonic pretreatment of synthesis gel affected the various properties of obtained mordenite, resulting in

The reduction of structural defects by ultrasonic pretreatment of the synthesis gel may be a feasible way to solve the common problem of “non-ideal” structure in synthetic mordenites. Additionally, higher sorption capacity in this structure could be achieved by an easy and efficient ultrasonic method applied before the synthesis, without time- and resource-consuming traditional postsynthetic treatment (which, on the contrary, leads to the generation of structural defects). Moreover, the lower number of silanol groups can contribute to a longer catalytic lifetime of the prepared mordenite.
(cf. Kornas et al. 2021) 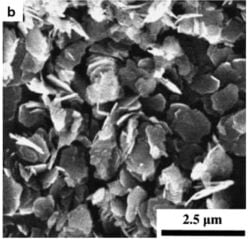 Solyman et al. (2013) studied the effects of ultrasound using the Hielscher ultrasonicator UP200S on H-mordite and H-bet zeolites. They came to the conclusion that sonication is an effective technique for H-mordite and H-Beta modification, which make the zeolites more appropriate for the production of dimethyl ether (DME) via dehydration of methanol.

Via sonochemical route, SAPO-34 (silicoaluminophosphate molecular sieves, a class of zeolites) were successfully synthesized in nanocrstalline form using TEAOH as structure directing agent (SDA). For sonication, the Hielscher probe-type ultrasonicator UP200S (24kHz, 200 watts) was used. The average crystal size of the final product prepared sonochemically is 50nm, which is a significantly smaller crystal size when compared to the size of hydrothermally synthesized crystals. When SAPO-34 crystals were sonochemically under hydrothermal conditions, the surface area is significantly higher than crystal surface area of conventionally synthesized SAPO-34 crystals via static hydrothermal technique with almost the same crystallinity. Whilst the conventional hydrothermal method takes at least 24 h of synthesis time in order to obtain fully crystalline SAPO-34, via sonochemically-assisted hydrothermal synthesis fully crystalline SAPO-34 crystals werde obtained after only 1.5 h reaction time. Due to the highly intense ultrasonic energy, zeolite SAPO-34 crystallization is intensified by the collapse of ultrasonic cavitation bubbles. The implosion of cavitation bubbles occurs in less than a nanosecond resulting locally in rapidly rising and falling temperatures, which prevents the organization and agglomeration of particles and leads to smaller crystal sizes. The fact that small SONO-SAPO-34 crystals could be prepared by the sonochemical method suggests a high nucleation density in the early stages of synthesis and slow crystal growth after nucleation. These results suggest that this unconventional method is a very useful technique for the synthesis of SAPO-34 nanocrystals in high yields at industrial production scale.
(cf. Askari and Halladj; 2012)

Ultrasonic Deagglomeration and Dispersion of Zeolites 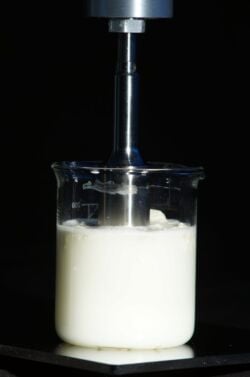 When zeolites are used in industrial applications, research or material science, the dry zeolite is mostly mixed into a liquid phase. Zeolite dispersion requires a reliable and effective dispersing technique, which applies enough energy to deagglomerate the zeolite particles. Ultrasonicators are well known to be powerful and reliable dispersers, therefore used to disperse various materials such as nanotubes, graphene, minerals and many other materials homogeneously into a liquid phase.
A zeolite powder not treated by ultrasound is considerably agglomerated with shell-like morphology. In contrast, a sonication treatment of 5 min (200 mL sample sonicated at 320 W) seems to destroy most of the shell-like shapes, which results in a more dispersed final powder. (cf. Ramirez Medoza et al. 2020)
For instance, Ramirez Medoza et al. (2020) used the Hielscher probe ultrasonicator UP200S to crystallize NaX zeolite (i.e., zeolite X synthesized in the sodium form (NaX)) at low temperature. Sonication during the first hour of crystallization resulted in 20% reduction of reaction time compared to a standard crystallization process. Furthermore, they demonstrated that sonication can also reduce the agglomeration degree of the final powder by applying high-intensity ultrasound for a longer sonication period.

The sophisticated hardware and smart software of Hielscher ultrasonicators are designed to guarantee reliable operation, reproducible outcomes as well as user-friendliness. The Hielscher ultrasonicators are robust and reliable, which allows to be installed and operated under heavy duty conditions. Operational settings can be easily accessed and dialled via intuitive menu, which can be accessed via digital colour touch-display and browser remote control. Therefore, all processing conditions such as net energy, total energy, amplitude, time, pressure and temperature are automatically recorded on a built-in SD-card. This allows you to revise and compare previous sonication runs and to optimize the zeolite synthesis and dispersion process to highest efficiency.
Hielscher Ultrasonics systems are used worldwide for crystallization processes and are proven to be reliable for the synthesis of high-quality zeolites and zeolite derivatives. Hielscher industrial ultrasonicators can easily run high amplitudes in continuous operation (24/7/365). Amplitudes of up to 200µm can be easily continuously generated with standard sonotrodes (ultrasonic probes / horns). For even higher amplitudes, customized ultrasonic sonotrodes are available. Due to their robustness and low maintenance, our ultrasonicators are commonly installed for heavy duty applications and in demanding environments.
Hielscher ultrasonic processors for sonochemical syntheses, crystallization and deagglomeration are already installed worldwide on commercial scale. Contact us now to discuss your zeolite manufacturing process! Our well-experienced staff will be glad to share more information on the sonochemical synthesis pathway, ultrasonic systems and pricing!
With the advantage of the ultrasonic synthesis method, your zeolite production will excel in efficiency, simplicity and low cost when compared to other zeolite synthesis processes!

Zeolites are the class of aluminosilicate, i.e. AlO2 and SiO2, in the category of microporous solids that known as “molecular sieves”. Zeolites mainly consist of silica, aluminum, oxygen, and metals such as titanium, tin, zinc, and other metal molecules. The term molecular sieve originates as from the particular property of zeolites to selectively sort molecules based primarily on a size exclusion process. The selectivity of molecular sieves is defined by their pore size. In dependence of the pore size, molecular sieves are categorized as macroporous, mesoporous and microporous. Zeolites fall into the class of microporous materials as their pore size is <2 nm. Due to their porous structure, zeolites have the ability accommodate a wide variety of cations, such as Na+, K+, Ca2+, Mg2+ and others. These positive ions are rather loosely held and can readily be exchanged for others in a contact solution. Some of the more common mineral zeolites are analcime, chabazite, clinoptilolite, heulandite, natrolite, phillipsite, and stilbite. An example of the mineral formula of a zeolite is: Na2Al2Si3O 10·2H2O, the formula for natrolite. These cation exchanged zeolites possess different acidity and catalyse several acid catalysis.
Due to their selectivity and porosity-derived properties, zeolites are often used as catalysts, sorbents, ion exchangers, wastewater treatment solutions, or as antibacterial agents.
Faujasite zeolite (FAU) for example is one specific form of zeolites, which are characterized by a framework with cavities of 1.3nm in diameter that are interconnected by pores of 0.8 nm. The faujasite-type zeolite (FAU) is used as catalyst for industrial processes such as the fluid catalytic cracking (FCC), and as adsorbent for volatile organic compounds in gas streams.