The production of dimethyl ether (DME) is a well-established industrial process that is divided into two steps: first, the catalytic hydrogenation of syngas into methanol (CO / CO2 + 3H2 → CH3OH + H2HO) and secondly, a subsequent catalytic dehydration of the methanol over acid catalysts to produce (2CH3OH → CH3OCH3 + H2O). The major limitation of this two-step DME synthesis is related to the low thermodynamics during the phase of methanol synthesis, which results in a low gas conversion per pass (15-25%). Thereby, high recirculation ratios as well as high capital and operating costs are occurring.
In order overcome this thermodynamic limitation, direct DME synthesis is significantly more favourable: In the direct DME conversion, the methanol synthesis step is coupled with the dehydration step in a single reactor
(2CO / CO2 + 6H2 → CH3OCH3 + 3H2O). 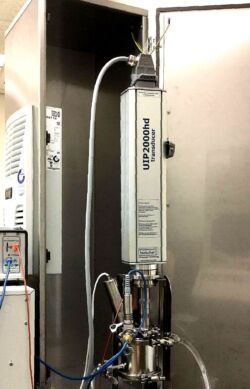 The ultrasonicator UIP2000hdT (2kW) with flow-through reactor is a commonly used setup for the sonochemical synthesis of mesoporous nanocatalysts (e.g. decorated zeolites).

The direct synthesis of DME allows for increasing the levels of conversion per step, up to 19%, which means significant cost reductions regarding the investment and operational production cost of DME. Based on estimations, the DME production cost in direct synthesis are reduced by 20-30% when compared to the conventional two-step conversion process. In order to operate the direct DME synthesis pathway, a highly efficient hybrid bifunctional catalytic system is necessary. The required catalyst must offer the functionality for CO / CO2 hydrogenation for the methanol synthesis and the acidic functionalities, which assist the dehydration of the methanol. (cf. Millán et al. 2020)

The reactivity and selectivity of catalysts for dimethyl ether conversion can be significantly improved via ultrasonic treatment. Zeolites such as acid zeolites (e.g., aluminosilicate zeolite HZSM-5) and decorated zeolites (e.g., with CuO/ZnO/Al2O3) are the main catalysts that are used successfully for DME production. 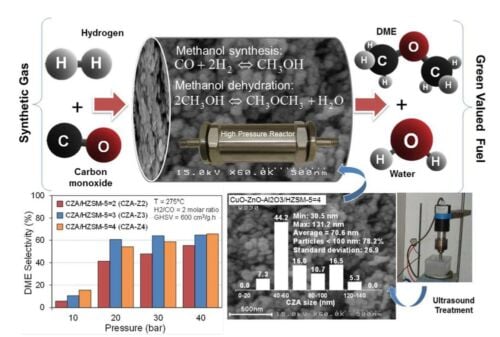 Hybrid co-precipitation-ultrasound synthesis of CuO-ZnO-Al2O3/HZSM-5 used in direct conver- sion of syngas to dimethyl ether as a green fuel.
Study and picture: Khoshbin and Haghighi, 2013.]

Chlorination and fluorination of zeolites are effective methods to tune the catalytic acidity. The chlorinated and fluorinated zeolite catalysts were prepared by the impregnation of zeolites (H-ZSM-5, H-MOR or H-Y) using two halogen precursors (ammonium chloride and ammonium fluoride) in the study by the research team of Aboul-Fotouh. The influence of ultrasonic irradiation was evaluated for optimizing both halogen precursors for production of dimethylether (DME) via methanol dehydration in a fixed bed reactor. Comparative DME catalysis trial revealed that the halogenated zeolite catalysts prepared under ultrasonic irradiation show higher performance for DME formation. (Aboul-Fotouh et al., 2016)
In another study, the research team investigated all important ultrasonication variables encountered during carrying out the dehydration of methanol on H-MOR zeolite catalysts to produce dimethylether. For their Sonication eperiments, the research team used the Hielscher UP50H probe-type ultrasonicator. Scanning electron microscope (SEM) imaging of the sonicated H-MOR zeolite (Mordenite zeolite) have clarified that methanol by itself used as an ultrasonication medium gives the best results concerning the homogeneity of particle sizes compared to the untreated catalyst, where large agglomerates and non-homogeneous clusters appeared. These findings certified that ultrasonication has a deep effect on the unit cell resolution and hence on the catalytic behavior of the dehydration of methanol to dimethyl ether (DME). NH3-TPD shows that ultrasound irradiation has enhanced the acidity of H-MOR catalyst and hence it is catalytic performance for DME formation. (Aboul-Gheit et al., 2014) 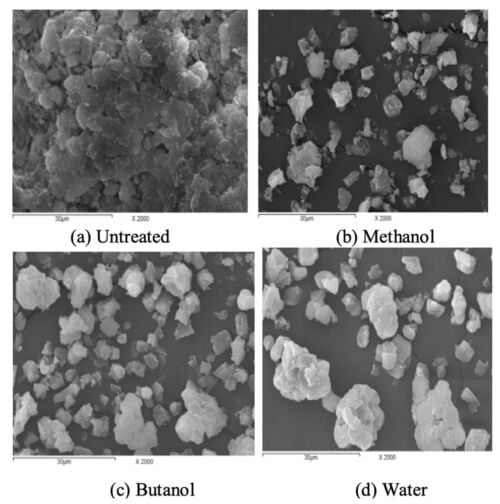 Koshbin and Haghighi (2013) prepared CuO–ZnO–Al2O3/HZSM-5 nanocatalysts via a combined co-precipitation–ultrasound method. The research team found “that employing of ultrasound energy have great influence on the dispersion of CO hydrogenation function and consequently the DME synthesis performance. The durability of ultrasound assisted synthesized nanocatalyst was investigated during syngas to DME reaction. The nanocatalyst loses negligible activity over the course of reaction due to coke formation on copper species.” [Khoshbin and Haghighi, 2013.]

Why Are Ultrasonically Prepared Nano-Catalysts Superior? 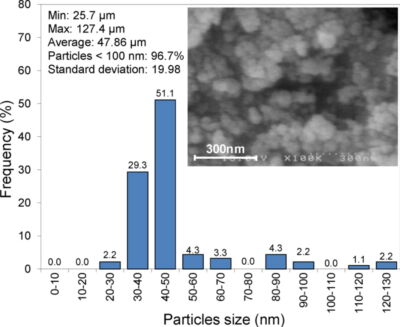 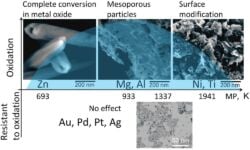 Schematic presentation of effects of acoustic cavitation on modification of metal particles. Metals with a low melting point (MP) as zinc (Zn) are completely oxidized; metals with a high melting point like nickel (Ni) and titanium (Ti) exhibit surface modification under sonication. Aluminium (Al) and magnesium (Mg) form mesoporous structures. Nobel metals are resistant to ultrasound irradiation due to their stability against oxidation. The melting points of the metals are specified in degrees Kelvin (K).

High Performance Ultrasonicators for the Synthesis of Mesoporous Catalysts

Sonochemical equipment for the synthesis of high-performance nano-catalysts is readily available at any size – from compact lab ultrasonicators to fully-industrial ultrasonic reactors. Hielscher Ultrasonics designs, manufactures, and distributes high-power ultrasonicators. All ultrasonic systems are made in the headquarter in Teltow, Germany and distributed from there all around the world. 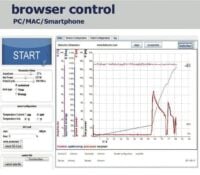 The sophisticated hardware and smart software of Hielscher ultrasonicators are designed to guarantee reliable operation, reproducible outcomes as well as user-friendliness. The Hielscher ultrasonicators are robust and reliable, which allows to be installed and operated under heavy duty conditions. Operational settings can be easily accessed and dialled via intuitive menu, which can be accessed via digital colour touch-display and browser remote control. Therefore, all processing conditions such as net energy, total energy, amplitude, time, pressure and temperature are automatically recorded on a built-in SD-card. This allows you to revise and compare previous sonication runs and to optimize the synthesis and functionalization of nano-catalysts to highest efficiency.
Hielscher Ultrasonics systems are used worldwide for sonochemical synthesis processes and are proven to be reliable for the synthesis of high-quality zeolite nano-catalystss as well as zeolite derivatives. Hielscher industrial ultrasonicators can easily run high amplitudes in continuous operation (24/7/365). Amplitudes of up to 200µm can be easily continuously generated with standard sonotrodes (ultrasonic probes / horns). For even higher amplitudes, customized ultrasonic sonotrodes are available. Due to their robustness and low maintenance, our ultrasonicators are commonly installed for heavy duty applications and in demanding environments.
Hielscher ultrasonic processors for sonochemical syntheses, functionalization, nano-structuring and deagglomeration are already installed worldwide on commercial scale. Contact us now to discuss your nano-catalyst manufacturing process! Our well-experienced staff will be glad to share more information on the sonochemical synthesis pathway, ultrasonic systems and pricing!
With the advantage of the ultrasonic synthesis method, your mesoporous nano-catalyst production will excel in efficiency, simplicity and low cost when compared to other catalyst synthesis processes! 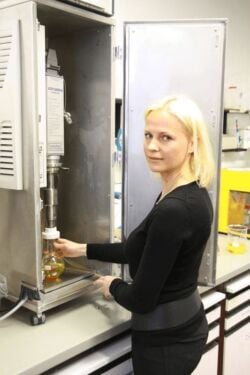 Dr. Andreeva-Bäumler, University of Bayreuth, is working with the ultrasonicator UIP1000hdT on nano-structuring of metals in order to obtain superior catalysts.

One of the major envisaged uses of dimethyl ether is its application as substitute for propane in LPG (liquid propane gas), which is used as fuel for vehicles, in households and industry. In propane autogas, dimethyl ether can also be used as a blendstock.
Furthermore, DME is also a promising fuel for diesel engines and gas turbines. For diesel engines, the high cetane number of 55, compared to that of diesel fuel from petroleum with cetane numbers of 40–53, is highly advantageous. Only moderate modifications are necessary to enable a diesel engine to burn dimethyl ether. The simplicity of this short carbon chain compound leads during combustion to very low emissions of particulate matter. For these reasons as well as being sulfur-free, dimethyl ether meets even the most stringent emission regulations in Europe (EURO5), U.S. (U.S. 2010), and Japan (2009 Japan).