Crystalline metal-organic frameworks (MOFs) fall within the category of high potential porous materials, which can be used in gas storage, adsorption/ separation, catalysis, as adsorbents, in magnetism, sensor design, and drug delivery. MOFs are typically formed by self-assembly where secondary building units (SBUs) get connected with organic spacers (ligands) to create complex networks. The organic spacers or the metallic SBUs can be modified in order to control the porosity of the MOF, which is crucial regarding its functionalities and its utility for particular applications.

Ultrasonic irradiation and the thereby generated cavitation are well known for its unique effects on chemical reactions, known as sonochemistry. The violent implosion of cavitation bubbles generates localized hot spots with exceedingly high transient temperatures (5000 K), pressures (1800 atm), and cooling rates (1010Ks-1) as well as shock waves and resulting liquid jets. At these cavitational hot spots, the crystal nucleation and growth, e.g. by Ostwald ripening, is induced and promoted. However, the particle size is limited since those hot spots are characterized by extreme cooling rates meaning that the temperature of the reaction medium falls within milliseconds.
Ultrasound is known to synthesize MOFs rapidly under mild process conditions, such as solvent-free, at room temperature and under ambient pressure. Studies have shown that MOFs can be produced cost-effectively at high yield via sonochemical route. Finally, the sonochemical synthesis of MOFs is a green, environmentally friendly method.

In the study of Wang et al (2011), Zn4O[1,4-benzenedicarboxylate]3 was synthesized via sonochemical route. 1.36g H2BDC and 4.84g Zn(NO3)2·6H2O were inilially dissolved in 160mL DMF. Then 6.43g TEA was added to the mixture under ultrasonic irradiation. After 2 h the colorless precipitate was collected by ﬁltration and washed by DMF. The solid was dried at 90°C in vacuum and then stored in a vacuum desiccator.

Li et al. (2009) report the efficient ultrasonic synthesis of three-dimensional (3-D) metal–organic framework (MOF) with 3-D channels, such as Cu3(BTC)2 (HKUST-1, BTC = benzene-1,3,5-tricarboxylate). The reaction of cupric acetate and H3BTC in a mixed solution of DMF/EtOH/H2O (3:1:2, v/v) under ultrasonic irradiation at ambient temperature and atmospheric pressure for short reaction times (5–60 min) gave Cu3(BTC)2 in high yield (62.6–85.1%). These Cu3(BTC)2 nano-crystals have dimensions of a size range of 10–200 nm, which are much smaller than those synthesized using conventional solvothermal method. There were no significant differences in physicochemical properties, e.g. BET surface area, pore volume, and hydrogen storage capacity, between Cu3(BTC)2 nano-crystals prepared using ultrasonic method and the microcrystals obtained by using improved solvothermal method. Compared with traditional synthetic techniques, such as solvent diffusion technique, hydrothermal and solvothermal methods, the ultrasonic method for the construction of porous MOFs was found to be highly efficient and more environmentally friendly.

Preparation of a One-Dimensional Mg(II) MOF

Qiu et al. (2008) found a sonochemical route for the rapid synthesis of fluorescent microporous MOF, Zn3(BTC)2⋅12H2O (1) and selective sensing of organoamines using nanocrystals of 1. The results reveal that ultrasonic synthesis is a simple, efficient, low cost, and environmentally friendly approach to nanoscale MOFs.
MOF 1 was synthesized using the ultrasonic method at an ambient temperature and atmospheric pressure for different reaction times of 5, 10, 30, and 90 min, respectively. A control experiment was also carried out to synthesize compound 1 using the hydrothermal method, and the structures were confirmed by IR, elemental analysis and Rietveld analysis of the powder X-ray diffraction (XRD) patterns using WinPLOTR and Fullprof13. Surprisingly, the reaction of zinc acetate dihydrate with benzen-1,3,5-tricarboxylic acid (H3BTC) in 20% of ethanol in water (v/v) under ultrasonic irradiation at ambient temperature and pressure for 5 min gave 1 in a remarkably high yield (75.3%, based on H3BTC). Also, the yield of 1 increased gradually from 78.2% to 85.3% with increasing the reaction time from 10 to 90 min. This result suggests that rapid synthesis of MOF can be realized in a significantly high yield using ultrasonic method. Compared with hydrothermal synthesis of the same compound MOF 1, which is carried out at 140°C at high pressure for 24 h,12 ultrasonic synthesis is found to be a highly efficient method with high yield and low cost.
Since no product was obtained by mixing zinc acetate with H3BTC in the same reaction medium at ambient temperature and pressure in the absence of ultrasound, sonication must play an important role during the formation of MOF 1. 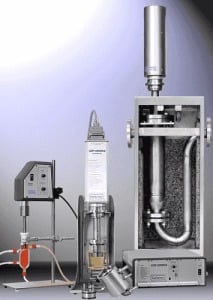 Hielscher Ultrasonics has long-time experience in the design and manufacturing of powerful and reliable ultrasonicators and sonochemical reactors. Hielscher covers your application requirements with its broad range of ultrasonic devices – from small lab devices over bench-top and pilot ultrasonicators up to full-industrial systems for sonochemical production on commercial scale. A large variety of sonotrodes, booster, reactors, flow cells, noise cancellation boxes and accessories allow to configurate the optimal setup for your sonochemical reaction. Hielscher’s ultrasonic devices are very robust, built for 24/7 operation and need only very little maintenance. 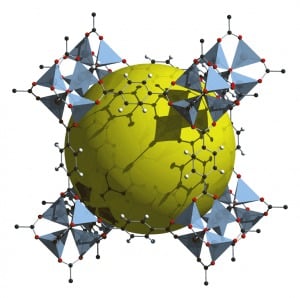 Metal-Organic Framworks can be effectively synthesized via sonochemical route