Ultrasonic lysis and extraction is a reliable and long-time established method for the disruption of cells and the subsequent release of viruses, viral proteins, DNA, and RNA. 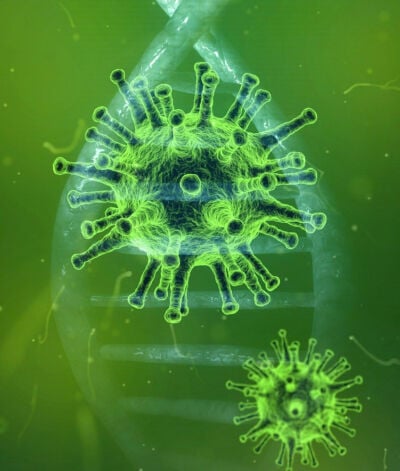 Hielscher Ultrasonics offer a wide range of ultrasonic systems for the sonication of very small lab samples up as well as for the processing of very large quantities on industrial scale.
Our probe-type ultrasonicators come at various power ranges to make sure we can recommend you the ideal device for your application. A broad spectrum of accessories such as sonotrodes of different sizes and shapes, flow cells and reactors with various sizes and geometries and other add-ons make sure that you can setup your ultrasonic cell disruptor for highest process efficiency and user-comfort. 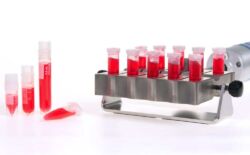 A unique ultrasonic design for sample preparation is the VialTweeter. The Hielscher VialTweeter allows for the sonication of up to 10 tubes (e.g., Eppendorf tubes, microcentrifuge tubes etc.) simultaneously under the same process conditions. The intense ultrasonic waves are transmitted through the tube walls, so that cross-contamination and sample loss are avoided. The VialTweeter is a compact ultrasonic system, which can be used in any laboratory setting. Its major advantages are the precise control over the process parameters, reproducibility, the simultaneous treatment of several specimens under same conditions without cross-contamination and the automatic data protocolling on a built-in SD-card.The robustness of Hielscher’s ultrasonic equipment allows for 24/7 operation at heavy duty and in demanding environments.

All Hielscher ultrasonic units are built for 24/7 use under full load. The reliability and robustness of Hielscher ultrasonicators make sure that you can process your materials with high efficiency getting the desired outcome. Our automatic frequency tuning ensures continuously running at the selected amplitude. Linear scalability makes it easy to scale-up to higher process volumes and same process results without risks.
From 200 watts upwards, all our ultrasonic systems come with a coloured touch-display, digital control, built-in SD-card for automatic data recording, pluggable temperature and optional pressure sensors, and
The table below gives you an indication of the approximate processing capacity of our ultrasonicators:

The term coronavirus comprises an entire branch of the virus family tree including the disease-causing pathogens behind SARS (severe acute respiratory syndrome), MERS (Middle Eastern respiratory syndrome) amongst other several variants. Speaking of the “coronavirus” and referring to a dangerous viral strain can be compared to saying “mammal” when meaning “grizzly bear”. It is technically correct, but very unspecific.

A virus is a small infectious particle that needs a host cell in order to replicate itself. Viruses invade living cells of an organism, ranging from animals and plants to microorganisms, including bacteria and archaea.

In general, viruses are significantly smaller than bacteria. Most viruses that have been studied until today have a diameter between 20 and 300 nanometres. As most viruses are such minute particles, an optical microscope does not have enough magnification to make them visible. To see and study viruses, scanning and transmission electron microscopes (SEM and TEM, respectively) are required.

Composition of a Virion

A complete virus particle is called a virion. Such virion consists in an inner core of nucleic acid, which can be either ribonucleic or deoxyribonucleic acid (RNA or DNA). The nucleic acid is surrounded by a protective outer protein shell called capsid. A capsid is made of identical protein subunits called capsomeres. The core of the virion confers infectivity, whilst the capsid provides specificity to the virus. Prions are infectious protein molecules that do not contain viral DNA or RNA.

Viruses that have a lipid envelope are known as enveloped virus. The so-called envelope is a lipid coating that surrounds the protein capsid. Viruses adopt the envelope from the host cell membrane during the budding process. Examples for enveloped viruses are SARS-CoV-2, HIV, HSV, SARS or smallpox.
Naked viruses do not have this envelope because they exit the cell by lysing it. However, some viruses can develop a “quasi-envelope” that completely encloses the viral capsid but is free from viral glycoproteins. Examples for naked viruses are poliovirus, nodavirus, adenovirus, and SV40.

Four main morphological virus types are distinguished, namely Helical, Icosahedral, Prolate, and Envelope. Furthermore there are so-called complex virus morphologies.
The morphology of a virus is defined by the capsid and its shape. The capsid is built from proteins encoded by the viral genome. The capsid shape is the basis for morphological distinction. Virally-coded protein subunits called capsomers self-assemble to form a capsid, which requires normally the presence of the virus genome.
Helical Viruses: Helical viruses have a capsid form that can be described as filamentous or rod-shaped. The helical shape has a central cavity in which the nucleic acid is enclosed. Depending on the capsomere arrangement, the helical shape gives the virus capsid flexibility or rigidity.
Icosahedral Viruses: The capsid of the icosahedral virus consists of identical subunits (capsomeres) that form equilateral triangles, which in turn are arranged in a symmetrical fashion. The icosahedral shape provides a very stable capsid formation offering plenty of room for the nucleic acid.
Prolate Viruses: The prolate shape is a variant of the icosahedral shape and is found in bacteriophages.
Enveloped Viruses: Some viruses have an envelope made from phospholipids and proteins. To assemble the envelope, the virus uses portions of its host’s cell membrane. The envelope functions as a protective coat of the capsid and helps thereby protecting the virus from the host’s immune system. The envelope may also have receptor molecules which enable the virus to bind with host cells and facilitate the infection of cells. One the one hand, a viral envelope facilitates the infections of cells; on the other hand, the viral envelope makes the virus more susceptible to inactivation by environmental agents, such as detergents (e.g., soap) that disrupt the lipid building blocks of the envelope.
Complex Viruses: A complex virus is determined by a capsid structure that is neither purely helical, nor purely icosahedra. Furthermore, complex viruses may have additional components such as protein tails or a complex outer wall. Many phage viruses are known for their complex structure, which combines an icosahedral head with a helical tail.

Viral species have a gigantic variety of genomic structures. The group of virus species contains more structural genomic diversity than plants, animals, archaea, or bacteria. There are millions of different types of viruses, although only about 5,000 types have been described in detail so far. This leaves a huge space for future virus research.