In order to initiate the setting reaction of calcium sulphate hemihydrate and water, calcium sulphate hemihydrate must be evenly dispersed into water so that a homogeneous slurry is prepared. The ultrasonic dispersion ensures that the particles are fully wetted so that a complete hemihydrate hydration is achieved. The ultrasonic mixing of the gypsum slurry accelerates the setting time due to an accelerated crystallization.
Additional ingredients such as accelerators and reinforcing nano materials can be very evenly blended into the gypsum slurry, too. 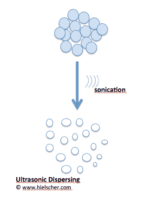 When high power ultrasound is coupled into a liquid or slurry, ultrasonically generated cavitation occurs. Ultrasonic cavitation creates locally extreme conditions including high shear forces, liquid jets, micro turbulences, high temperatures, feat heating and cooling rates as well as high pressures. Those cavitational shear forces overcome the binding forces between molecules so that they are deagglomerated and dispersed as single particles. Furthermore, particles are accelerated by the cavitational liquid jets so that they collide with each other and are thereby broken down to nano or even primary particle size. This phenomenon is known as ultrasonic wet-milling.
Power ultrasound creates nucleation sites in the solution so that an accelerated crystallization is achieved.
Click here to learn more about sono-crystallization – the ultrasonically assisted crystallization! 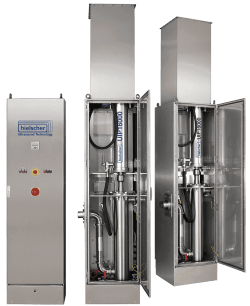 Hielscher Ultrasonics is your top supplier of high power ultrasonic systems for bench-top and industrial applications. Hielscher offers powerful and robust industrial ultrasonic processors. Our UIP16000 (16kW) is the most powerful ultrasonic processor worldwide. This 16kW ultrasound system processes easily large volumes of even highly viscous slurries (up to 10,000cp). High amplitudes of up to 200µm (and higher on request) ensure that the material is properly treated so that the desired level of dispersion, deagglomeration and milling is achieved. This intense sonication produces nano-particulated slurries for fast setting rates and superior gypsum products.
The robustness of Hielscher’s ultrasonic equipment allows for 24/7 operation at heavy duty and in demanding environments.
The table below gives you an indication of the approximate processing capacity of our ultrasonicators:

Our long experience in ultrasonic processing helps us to consult our customers from first feasibility studies to the implementation of the process on industrial scale.

Use our ultrasonic process lab and technical center for your process development and optimization!

Production of Gypsum Board

During the manufacturing process of gypsum board, an aqueous slurry of calcined gypsum – so called calcium sulphate hemihydrate – is spread out between the upper and lower paper sheets. The thereby created product must be continuously moved on a conveyer belt until the slurry has set. The sheet is then dried until the excess water in the gypsum board has evaporated. In the production of gypsum wallboard it is known to add various substances to the slurry to enhance the production process or the board itself. For example it is usual to lighten the weight of the slurry by incorporating foaming agents to provide a degree of aeration which lowers the density of the final wallboard.

Calcium sulfate (or calcium sulphate) is an inorganic compound with the formula CaSO4 and related hydrates. In the anhydrous form of γ-anhydrite, it is used as a general-purpose desiccant. A particular hydrate of CaSO4 is known as plaster of Paris. Another important hydrate is gypsum, which occurs naturally as a mineral. Especially gypsum is widely used for industrial applications, e.g. as building material, filler, in polymers etc. All forms of CaSO4 appear as white solids and are hardly soluble in water. Calcium sulfate causes permanent hardness in water.
The inorganic compound CaSO4 occurs in three levels of hydration:

Hydration and Dehydration Reactions
When heat is applied, gypsum converts into a partially dehydrated mineral – the so-called calcium sulfate hemihydrate, calcined gypsum, or plaster of Paris. Calcined gypsum has the formula CaSO4·(nH2O), where 0.5 ≤ n ≤ 0.8. Temperatures between 100°C and 150°C (212°F – 302°F) are necessary to remove the water that is bound in its structure. The exact heating temperature and time depend on the ambient humidity. Temperatures as high as 170°C (338°F) are applied for the industrial calcination. However, at these temperatures the formation of γ-anhydrite starts. The heat energy delivered to the gypsum at this time (the heat of hydration) tends to go into driving off water (as water vapor) rather than increasing the temperature of the mineral, which rises slowly until the water is gone, then increases more rapidly. The equation for the partial dehydration is the following:

The endothermic property of this reaction is relevant to the performance of drywall, conferring fire resistance to residential and other structures. In a fire, the structure behind a sheet of drywall will remain relatively cool as water is lost from the gypsum, thus preventing and retarding damage to the framing (through combustion of wood members or loss of strength of steel at high temperatures) and consequent structural collapse. At higher temperatures, calcium sulfate releases oxygen and acts thereby as oxidizing agent. This material characteristic is used in aluminothermy. In contrast to most minerals, which when rehydrated simply form liquid or semiliquid pastes, or remain powdery, calcined gypsum has an unusual property. When mixed with water at ambient temperature, it turns chemically back to the preferred dihydrate form, while it is physically “setting” into a rigid and relatively strong gypsum crystal lattice as shown in the equation below:

This exothermic reaction makes it so easy to cast gypsum into various shapes including sheets for drywalls, sticks for blackboard chalk, and molds (e.g. to immobilize broken bones, or for metal castings). Mixed with polymers, it has been used as a bone repair cement.
When heated to 180°C, a nearly water-free form, so-called γ-anhydrite (CaSO4·nH2O where n = 0 to 0.05), is formed. γ-Anhydrite reacts only slowly with water to return to the dihydrate state, so that it is widely used as commercial desiccant. When heated above 250°C, the completely anhydrous form of β-anhydrite occurs. β-anhydrite does not react with water, even over geological timescales, unless very finely ground.

Plaster is a building material which is used as protective and/or decorative coating material for walls, ceilings and to mould and moulding and cast decorative building elements.
Stucco is plasterwork, which is used to produce relief decorations.
The most common types of plaster are formulated from either gypsum, lime, or cement as main ingredient. Plaster is produced as a dry powder (gypsum powder). When the powder is mixed with water, a stiff but workable paste is formed. The exothermic reaction with water releases heat through a crystallization process, then the hydrated plaster hardens.

Gypsum plaster, or plaster of Paris, is produced by a heat treatment (approx. 300°F / 150°C) of gypsum:
CaSO4·2H2O + heat → CaSO4·0.5H2O + 1.5H2O (released as steam).
Gypsum can be re-formed by mixing the dry powder with water. To initiate the setting of unmodified plaster, the dry powder is mixed with water. After approx. 10 minutes, the setting reaction sets in and is finalized after approx. 45 minutes. However, a complete setting of gypsum is reached after approx. 72 hours. If plaster or gypsum is heated above 266°F / 130°C, hemihydrate is formed. Hemihydrate powder can be also transformed into gypsum when dispersed in water.