Prussian Blue or iron hexacyanoferrates are widely used as as a functional material to design electrochemical applications and to manufacture chemical sensors, electrochromic displays, inks and coatings, batteries (sodium‐ion batteries), capacitors and supercapacitors, cation storage materials such as for H+ or Cs+, catalysts, theranostics and others. Due to its good redox activity and high electrochemical stability, Prussian Blue is a metal-organic framework (MOF) structure that is used widely for electrode modification.
Besides various other applications, Prussian Blue and its analogues copper hexacyanoferrate and nickel hexacyanoferrate are used as colour inks of blue, red and yellow colour, respectively.
A huge advantage of Prussian Blue nanoparticles is their safety. Prussian Blue nanoparticles are fully biodegradable, biocompatible, and approved by FDA for medical applications. 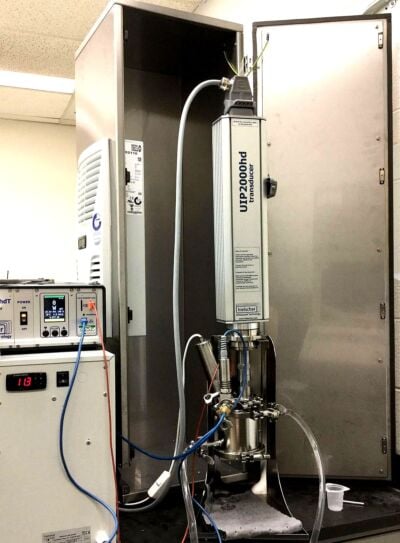 Generally, Prussian blue Nanoparticles are synthesized by employing ultrasonication method.
In this technique, 0.05 M solution of K4[Fe(CN)6] is added to 100 ml of hydrochloric acid solution of (0.1 mol/L). The resulting K4[Fe(CN)6] aqueous solution is kept at 40ºC for 5 h whilst sonicating the solution and then allowed to cool at room temperature. The obtained blue product is filtered and washed repeatedly with distilled water and absolute ethanol and finally dried in a vacuum oven at 25ºC for 12 h.

CuHCF nanoparticles are synthesized by the method developed by Bioni et al., 2007 [1]. The mixture of 10 mL of 20 mmol L-1 K3[Fe(CN)6] + 0.1 mol L-1 KCl solution with 10 mL of 20 mmol L-1 CuCl2 + 0.1 mol L-1 KCl, in an sonication flask. The mixture is then irradiated with high intensity ultrasound radiation for 60 min, employing a direct immersion titanium horn (20 kHz, 10Wcm-1) that was dipped till a depth of 1 cm into the solution. During the mixture, the appearance of a light-brown deposit is observed. This dispersion is dialysed over 3 days in order to obtain a very stable, light-brown coloured dispersion.
(cf. Jassal et al. 2015) 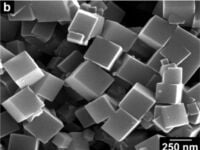 Wu et al. (2006) synthesised Prussian Blue nanoparticles via sonochemical route from K4[Fe(CN)6], in which Fe2+ was produced by the decomposition of [FeII(CN)6]4− by ultrasonic irradiation in hydrochloric acid; the Fe2+ was oxidized to Fe3+ to react with remaining [FeII(CN)6]4− ions. The research group concluded that the uniform size distribution of synthesized Prussian blue nanocubes is caused by the effects ultrasonication. The FE-SEM image on the left shows sonochemically synthesized iron hexacyanoferrate nanocubes by Wu’s research group.

Large-scale synthesis: to prepare PB nanoparticles on a large-scale, PVP (250 g) and K3[Fe(CN)6] (19.8 g) were added into 2,000 mL of HCl solution (1 M). The solution was sonicated until clear and then placed in an oven at 80°C to achieve an ageing reaction for 20–24 hours. The mixture was then centrifuged at 20,000 rpm for 2 hours for the collection of PB nanoparticles. (Safety note: In order to expel any HCN created, the reaction should be carried out in a fume hood). 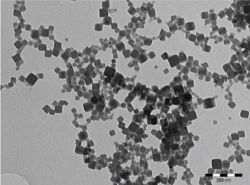 Hielscher Ultrasonics is long-termed experiences manufacturer of high-performance ultrasonic equipment that is used worldwide in laboratories and industrial production. The sonochemical synthesis and precipitation of nanoparticles and pigments is a demanding application that requires high-power ultrasonic probes which generate constant amplitudes. All Hielscher ultrasonic devices are designed and manufactured to be operated for 24/7 under full load. Ultrasonic processors are available from compact 50 watts laboratory ultrasonicators to 16,000watts powerful inline ultrasonic systems. A wide variety of booster horns, sonotrodes and flow cells allow for the individual setup of an sonochemical system in correspondence to the precursors, pathway and final product.
Hielscher Ultrasonics manufactures high-performance ultrasonic probes that can specifically set to deliver the full spectrum of very mild to very high amplitudes. If your sonochemical application requires unusual specifications (e.g., very high temperatures), customized ultrasonic sonotrodes are available. The robustness of Hielscher’s ultrasonic equipment allows for 24/7 operation at heavy duty and in demanding environments.

Hielscher ultrasonic probes can be used for batch and continuous inline sonication. Depending on reaction volume and reaction speed, we will recommend you the most suitable ultrasonic setup.

Ultrasonic Probes and Sono-Reactors for Any Volume 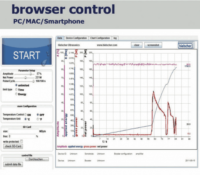 All Hielscher ultrasonic processors are precisely controllable and thereby reliable work horses. The amplitude is one of the crucial process parameters that influence the efficiency and effectiveness of sonochemically and sonomechanically induced reactions. All Hielscher Ultrasonics’ processors allow for the precise setting of the amplitude. Sonotrodes and booster horns are accessories that allow to modify the amplitude in an even wider range. Hielscher’s industrial ultrasonic processors can deliver very high amplitudes and deliver the required ultrasonic intensity for demanding applications. Amplitudes of up to 200µm can be easily continuously run in 24/7 operation.
Precise amplitude settings and the permanent monitoring of the ultrasonic process parameters via smart software give you the possibility to synthesise your Prussian Blue nanocubes and hexacyanoferrate analogues under the most effective ultrasonic conditions. Optimal sonication for most efficient nanoparticle synthesis!
The robustness of Hielscher’s ultrasonic equipment allows for 24/7 operation at heavy duty and in demanding environments. This makes Hielscher’s ultrasonic equipment a reliable work tool that fulfils your sonochemical process requirements.

As a family-owned and family-run business, Hielscher prioritizes highest quality standards for its ultrasonic processors. All ultrasonicators are designed, manufactured and thoroughly tested in our headquarter in Teltow near Berlin, Germany. Robustness and reliability of Hielscher’s ultrasonic equipment make it a work horse in your production. 24/7 operation under full load and in demanding environments is a natural characteristic of Hielscher’s high-performance ultrasonic probes and reactors.

The sodium-ion battery (NIB) is a type of rechargeable battery. In contrast to the lithium-ion battery, the sodium ion battery uses sodium ions (Na+) instead of lithium as the charge carriers. Otherwise, the composition, functioning principle and cell construction are widely identical with that of the common and widely used lithium-ion batteries. The main difference between those both battery types is that in Li-ion capacitors lithium compounds are used, whilst in Na-ion batteries sodium metals are applied. This means that the cathode of a sodium-ion battery contains sodium or sodium composites and an anode (not necessarily a sodium-based material) as well as a liquid electrolyte containing dissociated sodium salts in polar protic or aprotic solvents. During charging, Na+ are extracted from the cathode and inserted into the anode while the electrons travel through the external circuit; during discharging, the reverse process occurs where the Na+ are extracted from the anode and re-inserted in the cathode with the electrons travelling through the external circuit doing useful work. Ideally, the anode and cathode materials should be able to withstand repeated cycles of sodium storage without degradation in order to ensure a long life cycle.
Sonochemical synthesis is a reliable and efficient technique to produce high-quality bulk sodium metal salts, which can be used for the manufacturing of sodium-ion capacitors. The synthesis of sodium powder is accomplished via ultrasonic dispersion of molten sodium metal in mineral oil. If you are interested in ultrasonically synthesising sodium metal salts, ask us for more information by either filling the contact form, sending us an email (to info@hielscher.com) or calling us!

Metal–organic frameworks (MOFs) are a class of compounds consisting of metal ions or clusters coordinated to organic ligands, which can form one-, two-, or three-dimensional structures. They are a subclass of coordination polymers. Coordination polymers are formed by metals, which are linked by ligands (so-called linker molecules) so that repeating coordination motives are formed. Their main features include crystallinity and being often porous.
Read more about the ultrasonic synthesis of metal-organic framework (MOF) structures!