The main processing step of margarine production is the emulsification of water and hydrogenated oils/fats such as corn oils, soy oils, peanut oils, sunflower seed oils, etc. Due to the high oil concentration of 40-90%, it is very important to apply high sheer forces to create an uniform, fine-size emulsion. Ultrasonic emulsification is documented as fast and efficient technique for formulating stable nanoemulsion with very small droplet diameter and low polydispersity. Ultrasonic emulsions are often more stable than those produced conventionally and often require little, if any, surfactant.[Mason 1996]
The droplet size of the emulsion has major impacts on the margaine quality, such as spread consistence, stability and taste perception.
In comparison with mechanical agitators and shear mixers, ultrasound requires less surfactants and produces smaller and more stable droplets. Ultrasonic emulsifying is cost-saving, safe, simple to operate and can be easily retrofitted into existing industrial lines to improve the quality of emulsified products.

Ultrasound is not only very efficient for the emulsification, but it helps to mix and blend powders, such as stabilizers, vitamins, colorants and other ingredients, uniformly into the margarine. Click here to learn more about ultrasonic homogenization and blending!

The smaller the water droplet size. the less attractive the environment for the micro-organisms since less nutrients are available to them. Similarly, the smaller the water droplet size the greater is the proportional chance of more sterile water droplets than actual micro-organisms. Hence, small water droplet size increases the shelf life of the product. and this is a side function of what the emulsiﬁers are able to do on grounds mainly of texture and stability. By small, it is meant that the average droplet size in margarine is 4-5 µm with a range from 1 to 20µm. When the droplet size is less than 10µm, it is doubtful that these restrictive environments will allow micro-organism growth (Delamarre and Batt, 1999). As ultrasonic emulsification provides droplets in the submicron– and nano-range, the sonication process helps to reduce spoilage and to enhance the shelf-life of margarine and other spreads.

The hydrogenation of vegetable oils is an important industrial large scale process. By hydrogenation, liquid vegetable oils are convertetd into solid or semi-solid fats. The hydrogenation is a common pre-processing step of margarine manufacturing. Chemically, the unsaturated fatty acids are converted during the phase transfer catalyzed reaction of hydrogenation into their corresponding saturated fatty acids by adding hydrogen atoms at the doublebonds. This catalytic process can be accelerated by high-power ultrasonication. Commonly used catalysts are nickel, aluminum or palladium. Hydrogenated fats are used extensively as shortening agents in bakery products. An advantage of saturated fats is their lower tendency to oxidation and thereby a lower risk of rancidity.

Hielscher offers a broad range of ultrasonic machines and accessories to fulfill its customers’ needs exactly. Ultrasonicators from lab devices to bench-top/ pilot and full-industrial production scale are readily available. Wether you want to process batches or volume streams inline, Hielscher offers you the suitable ultrasonic system.
Margarine is normally manufactured as continuous process. Hielscher’s ultrasonic flow cells come in various sizes to match your production requirements. To improve the ultrasonic emulsification process, Hielscher has developed the patent-pending flow-cell insert MultiPhaseCavitator which features the injection of the second phase as fine liquid streams over injection cannulas directly into the cavitational zone resulting in an ultra-fine emulsion.
All industrial ultrasonic processors can be easily installed and retrofitted into existing production lines. For special requirements and applications, we supply customized solutions, which are adapted to your specific requirements. 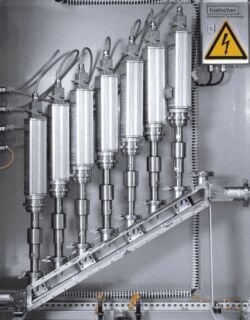 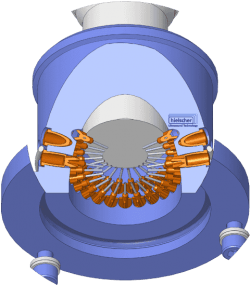