Molecular Cuisine and other Culinary Applications

A Brief Guide to the Principles

Ultrasound Waves and their Application to Food

The ultrasonic homogeniser as a technique has been around for many years in various forms, but is only just finding its way into smaller scale culinary applications. The homogeniser contains some sophisticated electronics which can convert and control electrical power into high frequency vibrations of the metal tip or sonotrode.
The sonotrode moves primarily up and down at quite high frequency above audible range (e.g. 26000 times a second or 26Khz with the UP200Ht). The amount that the sonotrode moves up and down is called the amplitude and typically can be adjusted between 9 and 240 µm (the average human hair is around 100 µm thick for reference). In simple terms the sonotrode behaves like a piston moving up and down in the liquid.
As the sonotrode moves up and down while immersed in a liquid, it creates areas of high and low pressure within the liquid around the sonotrode this in turn creates a phenomenon known as cavitation. We see in the kitchen that lowering pressure (such as in a chamber sealer) causes liquids to boil at lower temperatures and raising the pressure (such as a pressure cooker) causes liquids to boil at a higher temperature.
The rapidly fluctuating pressure pulsations at the tip of the sonotrode cause the formation and then rapid collapse of bubbles within the liquid. This all happens on a minute scale but creates huge forces within the liquid due to the velocities, temperatures and pressures generated by the cavitation. It is these huge forces that can be turned to our advantage in the kitchen for the extraction of flavours by rupturing cells or breakdown of particulates.
One of the challenges in the use of this equipment however is to harness and control this power in a way that enhances foods and not destroys them, breaking them down into less desirable compounds.
The purchased ultrasonic homogeniser model UP200Ht dictates the maximum power available to the user and the homogeniser itself has a number of variables that can be used to adjust its performance to suit the application. For the purpose of this guide, the model used was a 200 watt unit.

The size of the sonotrode fitted has a major effect on how the unit delivers its power.
In very simple terms, the bigger the surface area of the sonotrode the more power it will require to drive it at any given amplitude. The viscosity of the fluid will also have a large influence on the power required to drive the sonotrode at a given amplitude.
Imagine the sonotrode as a piston or plunger, if the piston is moved up and down very fast in a pot of thin liquid such as water it is relatively easy to do so even at reasonable speeds, however fill the pot with a thick sauce and the same will not be true, it will require much more power to move the piston rapidly up and down in the liquid due to the increased viscosity. Increase the size of the piston or plunger and it will also require more effort to move it up and down in the liquid.
The same is true of the sonotrode. With a large sonotrode fitted, the unit will have to work far harder to produce a given amplitude of oscillation if the liquid has a high viscosity than with a low viscosity fluid. 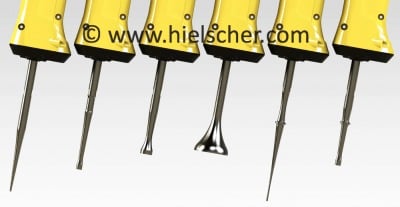 Sonotrodes with different sizes and shapes for the UP200Ht

At any given power setting a smaller sonotrode due to its surface area will generate larger pressure fluctuations and higher cavitation intensities at the tip than a larger sonotrode (as the power is focused on a smaller sonotrode’s surface area).
It may not be possible to drive a larger sonotrode at the same amplitude as far more power will be required to do so, possibly resulting in the shutdown of the unit due to overload. In this case the size of the sonotrode has to be reduced or a higher power unit be obtained.
The input ultrasound intensity (at any given power setting) decreases with increasing surface area (larger sonotrodes), where as the ultrasonic power intensity increases with decreasing surface area, or to put it another way, a smaller sonotrode puts a lot of ultrasonic power into a small area, where as a larger sonotrode spreads the power over a larger area.
When the homogeniser is used the total work done on the sample is a combination of the power input of the homogeniser, the volume of the sample and the time it is exposed. In order to get reproducible results, we must consider all three parameters. Do not expect to put the device in a small cup full of liquid for two minutes and then get the same result in a litre of liquid over the same time period! Equally remember that with small sample sizes and high power inputs, the temperature of the sample will rise quickly. For temperature sensitive samples it is better to use lower power settings over longer periods, allowing the energy inputted by the homogeniser as heat to be dissipated.
Overheating the sample may well cause some of the very aromas you are trying to capture to escape the system.
High power inputs may also cause the degradation of the sample, as can be seen when using certain oils. Oils when exposed to the high energy inputs at the tip of the homogeniser can break down resulting in a highly unpleasant taste which can only be described as the taste of electrical burning!
For temperature sensitive materials cooling of the sample will improve the results such as by using an ice bath or the inclusion of some dry ice into the sample. Using lower power inputs over a longer period helps disperse the energy released into the system as does using the unit in pulse mode which allows some cooling between each burst of ultrasound.
Within the electronics of the homogeniser, the user can choose to operate the unit in two main modes of control.

In this mode the user sets the required power input in watts and the electronics will adjust the amplitude of the oscillations in order to regulate the input power to the users setting. This mode allows the power transferred to the liquid to be regulated and therefore the heat generated in the liquid limited avoiding damage to more sensitive samples.

In addition to the two modes of operation, there is a pulse mode, whereby the electronics switch on and off in cycles, the timing of which is set by the user from being on 10% of the time and off 90% to on 90% of the time and off 10%. This gives a pulsating effect and is useful both for limiting the overall power input to the sample and creating good agitation within the sample to the initial input being high as the electronics stabilises during each duty cycle.

When using the homogeniser for the infusion of flavours better results are obtained when the solids have been reduced in size prior to being homogenised, this will increase the surface area exposed to the sonotrode. The same principle applies when using the homogeniser for particle size reduction. Think of the homogeniser as a fine finishing tool not a course grinder! In the reduction of particle sizes much of the work is done by the high speed collisions of particles accelerated the forces generated at the sonotrode. Much better results will be obtained if some of the particle reduction is done before sonication. Starting with the bulk particle size reduction already done means that a greater surface area is exposed to sonication and that the smaller particles will be accelerated in the liquid more quickly, resulting in higher collisions with a force to further break down particles. Less work will also need to be done by the homogeniser, allowing the temperature to be controlled better.
As the homogeniser works at quite a localised level it is useful when in use with larger samples of say several hundred millilitres or more to provide additional agitation to ensure that the volume around the sonotrode is refreshed, ensuring complete sonication of the sample. This is particularly true of more viscous samples. A good magnetic stirrer is a useful way to achieve this. The agitation also helps with ensuring the volume of liquid around the sonotrode is not overheated. Using an ice bath, or dry ice pieces in the sample will help remove the energy imparted by the sonification. As already discussed if the material is temperature sensitive, use lower power settings over an increased period of time and or use the pulse mode to limit the temperatures generated in the sample allowing the sample to cool between sonic pulses.

We’ll be glad to work with you.