Distilleries are using high-performance ultrasonication to improve the quality of distilled spirits within hours thereby skipping or reducing the time-consuming barrel-ageing, which takes up to several years. Ultrasonics promote the mechanical and chemical reactions, which take several years under conventional maturation conditions, and condense them to a few hours of treatment time. Ultrasonically aged and smoothened distillates are recognized as full-bodied, round and matured liquors exhibiting the same quality attributes as long-time barrel aged spirits. 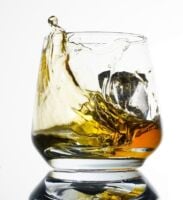 Many high-quality alcoholic beverages require to be aged in barrels for long periods of time. The aim is to impart flavours from the wood of the barrel (e.g. oak, maple, acacia, chestnut, cherry etc.) into the distilled spirit or wine. During the ageing period, many chemical reactions occur, which change taste and aroma of the alcoholic beverage significantly. However, ageing takes time and is cost-intensive. That is why high quality, long aged liquors and wines are expensive. Therefore, the technology of ultrasonic ageing has attracted wide interest and rapid adoption from the distilleries and vineyards.
Ultrasound is already known for its various applications, such as blending, texture modification and flavour extraction in the gourmet cuisine as well as in industrial food processing. Ultrasound is also successfully used for artificial ageing during the maturation process of distilled spirits, wine and vinegar.
Scientific research has already proven that an ultrasound treatment at approx. 20 kHz influences distilled spirits, e.g., rice alcoholic beverages, positively. Ultrasonic ageing at 20kHz achieved better maturation results than the 1.6 MHz sonication. Chang (2005) came to the conclusion that 20 kHz ultrasonic irradiation is a good alternative method for ageing the alcoholic beverages. (cf. Chang, 2005) 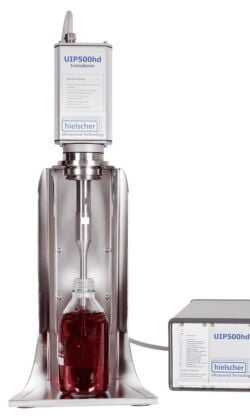 Ageing of spirits and wine through the conventional method of barrel ageing for long periods is a time-consuming process. The unmatured spirit needs time to penetrate the wood of the barrel or wood chips. The mass transfer between liquid and wood, by which the flavour compounds such as volatile flavour molecules are transferred into the liquid is very slow. Therefore, many distilleries try to speed up the maturation by using smaller barrels as this improves the ratio between surface area of the wood and the liquid. However, even if this might improve the colour and give the spirit a sweet and slightly rounder taste, it is by far not enough to mask or smoothen the harshness of the not yet fully matured alcohol.
The solution: Enter ultrasonication into the ageing process. Ultrasonication is a mechanical processing technique, which creates cavitation, intense shear and agitation. These energy-dense forces do not only create turbulences and agitation in the liquid, but also promote the penetration of the liquid into the wood. This means, the spirit or wine is able to move in and out of the wood’s cell matrix. The cell matrix of the wood contains the flavour molecules, which give aged spirits and wines their unique bouquet and unique flavour.
Whilst other mixing technologies such as paddle or blade agitators just move the liquid over the surface of the wood, ultrasonic cavitation breaks cellular structures and results thereby in an efficient and rapid extraction of flavour molecules.

Oaking and Infusion of Distilled Spirits

Freshly distilled spirits have a harsh taste, which can be attributed to the lack of various chemical reactions. That is why liquors require time for maturation after distillation. During several years of ageing in wooden barrels or casks, often under the addition of toasted oak chips or other flavour-contributing botanicals, several chemical reactions such as esterification and oxidation occur in the spirit. The slowness of these chemical reactions make it necessary that the distillate remains for long periods in the barrel.
Intensify and accelerate the maturation with ultrasound: Ultrasound offers a simple and reliable solution – these slow chemical reactions can be easily accelerated by the application of high-power ultrasound waves. During the sonication of liquids, the phenomenon of acoustic cavitation is observed. Acoustic cavitation is well known to promote chemical reactions. This means, ultrasound accelerates the chemical processes of esterification and oxidation in the distillates and shortens the maturation significantly.
Additionally, the alternating high-pressure / low-pressure cycles of ultrasonic cavitation press the distilled spirit into the pores of the wood thereby increasing the mass transfer between liquid and solid dramatically. Ultrasonically promoted oaking as well as the infusion with other flavour compounds from fruits, herbs etc. are based on the principle of ultrasonic extraction. Read more about ultrasonic extraction of botanicals!

Smoothening the Taste of Spirits

Distilled spirits, especially when not aged for a substantial time, often exhibit a harsh flavour profile resulting from high acidity / low pH value. Spirits with particularly pronounced acidity and with pH values lower than 3 turn spirits and liquors into an acidic beverage (comparable to the acidity of orange juice). The smoothness of spirits is largely a function of pH.
Additionally, compounds such as isopropanol require maturation time in order to react with free fatty acids so that aromatic esters are formed. These esters in distilled spirits are the aromatic components, which are mainly responsible for the bouquet and flavour. Ultrasound and ultrasonically-promoted oxidation accelerate the formation of those wanted esters and reduce unwanted congeners – reducing the maturation time of several years down to a few hours.

Advantages of Ultrasonic Ageing of Distilled Spirits and Wine

Ultrasonicators with flow cells for the ageing, oaking and finishing of distilled spirits. SOnication reduced the maturation time from several years down to a few hours.

Hielscher Ultrasonics supplies high-power, low-frequency ultrasonic processors to the food and beverage industry since decades. Distilleries and wineries have adopted the ultrasonic technology to produce high-quality alcoholic beverages under more efficient conditions, i.e., accelerated treatment and precisely controllable conditions.
Hielscher ultrasonicators are available at any size, from the hand-hold lab device for research and quality control to bench-top and pilot systems for micro-distilleries and mid-size distilleries as well as high-throughput ultrasonicators for large commercial spirit producers.
All Hielscher ultrasonic processors feature state-of-the-art technology including digital colour display, sophisticated software, smart settings, automatic data protocolling on integrated SD-card, and browser remote control for precise operation, repeatable and reproducible results, as well as highest user-friendliness. Customers worldwide use Hielscher Ultrasonics technology in wineries and distilleries achieving great results in refining, ageing, oaking and infusing distilled spirits and wines.
Hielscher Ultrasonics’ industrial ultrasonic processors can continuously deliver very high amplitudes and are designed for 24/7/365 operation. Robustness and reliability are obvious quality features of all Hielscher ultrasonicators.
The table below gives you an indication of the approximate processing capacity of our ultrasonicators:

Distilled spirits, distilled alcohol and liquors define an alcoholic drink produced by the distillation of grains, fruits, or vegetables that were fermented afore through alcoholic fermentation. During the distillation process, the liquid is concentrated in order to increase its alcohol by volume (vol%). Distilled spirits and liquors contain significantly more alcohol (ethanol) than other alcoholic drinks such as wine, beer or alcoholic mixed beverages.The aromatic characteristics of spirits is mainly obtained from from agricultural raw materials, which are processed during various treatments steps including fermentation, distillation, and barrel ageing.