Nanodiamonds (also called detonation diamonds (DND) or ultradispersed diamonds (UDD)) are a special form of carbon nanomaterials distinguished by unique characteristics – such as its lattice structure, its large surface, as well as unique optical and magnetic properties – and exceptional applications. The properties of ultradispersed particles make these materials innovative compounds for the creation of novel materials with extraordinary functions. The size of the diamond particles in the soot is about 5nm. 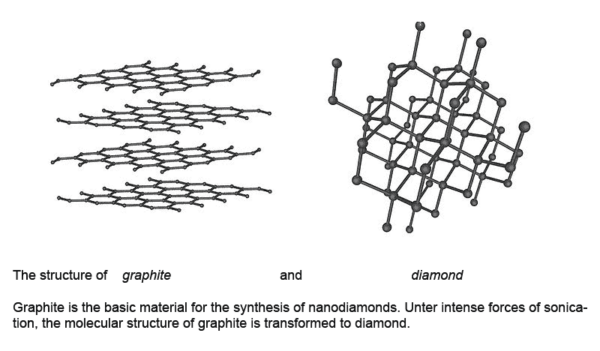 Under intense forces, such as sonication or detonation, graphite can be transformed into diamond.

The synthesis of diamonds is an important research field regarding scientific and commercial interests. The commonly used process for the synthesis of micro-crystalline and nano-crystalline diamond particles is the high-pressure-high-temperature (HPHT) technique. By this method, the required process pressure of tens of thousands of atmospheres and temperatures of more than 2000K are generated to produce the main part of the worldwide supply of industrial diamond. For the transformation of graphite into diamond, in general high pressures and high temperatures are required, and catalysts are used to increase the yield of diamond.
These requirements needed for transformation can be generated very efficiently by the use of high power ultrasound (= low frequency, high intensity ultrasound):

Ultrasound in liquids causes locally very extreme effects. When sonicating liquids at high intensities, the sound waves that propagate into the liquid media result in alternating high-pressure (compression) and low-pressure (rarefaction) cycles, with rates depending on the frequency. During the low-pressure cycle, high-intensity ultrasonic waves create small vacuum bubbles or voids in the liquid. When the bubbles attain a volume at which they can no longer absorb energy, they collapse violently during a high-pressure cycle. This phenomenon is termed cavitation. During the implosion very high temperatures (approx. 5,000K) and pressures (approx. 2,000atm) are reached locally. The implosion of the cavitation bubble also results in liquid jets of up to 280m/s velocity. (Suslick 1998) It is obvious that micro- and nano-crystalline diamonds may be synthesized in the field of ultrasonic cavitation. 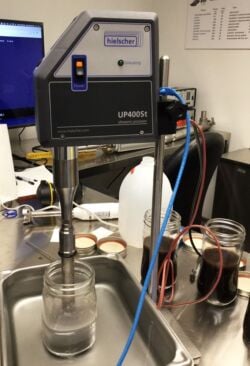 Ultrasonic Procedure for the Synthesis of Nanodiamonds

De facto, the study of Khachatryan et al. (2008) shows that diamond microcrystals can also be synthesized by the ultrasonication of a suspension of graphite in organic liquid at atmospheric pressure and room temperature. As cavitation fluid, a formula of aromatic oligomers has been chosen due to its low saturated vapour pressure and its high boiling temperature. In this liquid, the special pure graphite powder – with particles in the range between 100-200 µm – has been suspended. In the experiments of Kachatryan et al., the solid-fluid weight ratio was 1:6, the cavitation fluid density was 1.1g cm-3 at 25°C. The maximum ultrasonic intensity in the sonoreactor has been 75-80W cm-2 corresponding to a sound pressure amplitude of 15-16 bar.
It has been achieved approximately a 10% graphite-to-diamond conversion. The diamonds were nearly mono-dispersed with a very sharp, well designed size in the range of 6 or 9μm ± 0.5μm, with cubic, crystalline morphology and high purity. 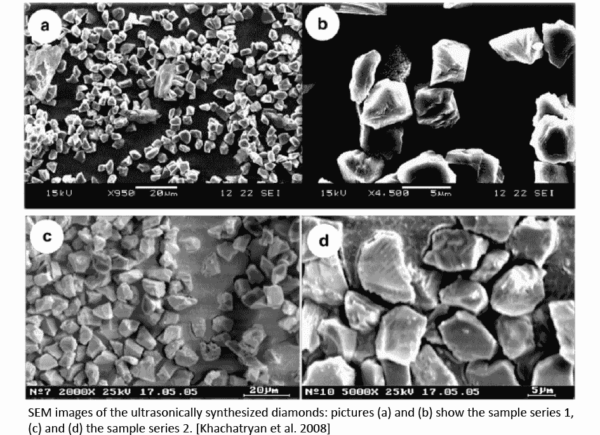 The costs of micro- and nanodiamonds produced by this method is estimated to be competitive with the high-pressure-high-temperature (HPHT) process. This makes ultrasound an innovative alternative for the synthesis of micro- and nano-diamonds (Khachatryan et al. 2008), especially as the production process of nanodiamonds can be optimized by further investigations. Many parameters such amplitude, pressure, temperature, cavitation fluid, and concentration must be examined accurately to discover the sweet spot of ultrasonic nanodiamond synthesis.
By the results achieved in synthesizing nanodiamonds, further ultrasonically generated cavitation offers the potential for the synthesis of other important compounds, such as cubic boron nitride, carbon nitride etc. (Khachatryan et al. 2008)
Further, it seems to be possible to create diamond nanowires and nanorods from multi-walled carbon nanotubes (MWCNTs) under ultrasonic irradiation. Diamond nanowires are one-dimensional analogues of bulk diamond. Due to its high elastic modulus, strength-to-weight ratio, and the relative ease with which its surfaces can be functionalized, diamond has been found to be the optimal material for nanomechanical designs. (Sun et al. 2004)

As already described, the deagglomeration and the even particle size distribution in the medium are essentials for the successful exploitation of nanodiamonds’ unique characteristics.
Dispersion and deagglomeration by ultrasonication are a result of ultrasonic cavitation. When exposing liquids to ultrasound the sound waves that propagate into the liquid result in alternating high-pressure and low-pressure cycles. This applies mechanical stress on the attracting forces between the individual particles. Ultrasonic cavitation in liquids causes high speed liquid jets of up to 1000km/hr (approx. 600mph). Such jets press liquid at high pressure between the particles and separate them from each other. Smaller particles are accelerated with the liquid jets and collide at high speeds. This makes ultrasound an effective means for the dispersing but also for the milling of micron-size and sub micron-size particles.
For example, nanodiamonds (average size of about 4nm) and polystyrene can be dispersed in cyclohexane to obtain a special composite. In their study, Chipara et al. (2010) have prepared composites of polystyrene and nanodiamonds, containing nanodiamonds in a range between 0 and 25% weight. To obtain an even dispersion, they sonicated the solution for 60 min with Hielscher’s UIP1000hd (1kW).

For the functionalization of the complete surface of each nano-sized particles, the surface of the particle must be available for chemical reaction. This means an even and fine dispersion is required as the well-dispersed particles are surrounded by a boundary layer of molecules attracted to the particle surface. To get new functional groups to nanodiamonds’ surface, this boundary layer has to be broken or removed. This process of break and removal of the boundary layer can be performed by ultrasonics.
Ultrasound introduced into liquid generates various extreme effects such as cavitation, locally very high temperature up to 2000K and liquid jets of up to 1000km/hr. (Suslick 1998) By this stress factors the attracting forces (e.g. Van-der-Waals forces) can be overcome and the functional molecules are carried to the surface of the particle to functionalize, e.g. nanodiamonds’ surface. 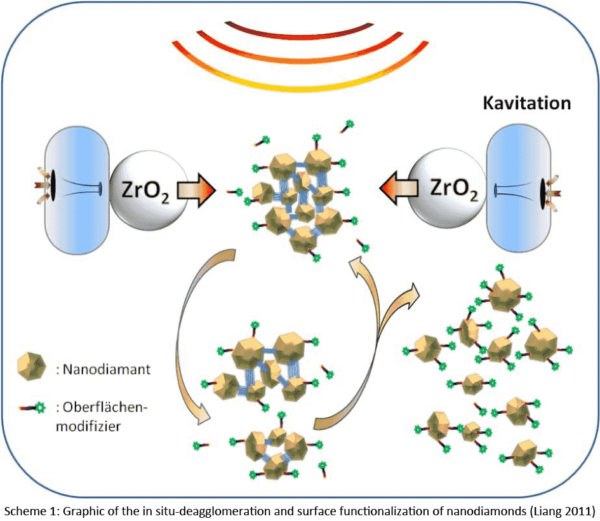 Scheme 1: Graphic of the in situ-deagglomeration and surface functionalization of nanodiamonds (Liang 2011)

Experiments with the Bead-Assisted Sonic Disintegration (BASD) treatment have shown promising results for the surface funcionalization of nanodiamonds as well. Thereby, beads (e.g. micro-sized ceramic beads such as ZrO2 beads) have been used to enforce the ultrasonic cavitational forces onto the nanodiamond particles. The deagglomeration occurs due to the interparticular collision between the nanodiamond particles and the ZrO2 beads.
Due to the better availability of particles’ surface, for chemical reactions such as the Boran reduction, arylation or silanization, an ultrasonic or BASD (bead-assisted sonic disintegration) pre-treatment for dispersing purpose is highly recommended. By ultrasonic dispersing and deagglomeration the chemical reaction can proceed much more completely. 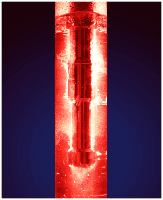 Nanodiamonds – Use and Applications