Purpose: Hydraulic fluids, engine oils, transmission fluids for cars, tractor fluids and other power transmission fluids are exposed to shear forces of varying degrees during usual operation, which can lead to changes in viscosity and a subsequent decrease in efficiency. In order to improve the viscosity index of hydraulic fluids, polymers are added to these fluids. The ASTM D2603 test examines viscosity changes in polymer-containing fluids exposed to ultrasound-induced shear forces, so-called sonic shearing vibrations.
Application: It is goal of the ASTM D2603 protocol to determine the viscosity of the sample. Therefore, the sample is placed in the test beaker, tempered to the specified testing temperature and sonicated using an ultra-sonic probe for the time specified in the test protocol ASTM D2603. Subsequently, the resulting viscosity of the fluid is measured and the exact change in viscosity is reported in percentage.

The test method specified in the ASTM D2603 protocol permits the evaluation of shear stability with minimum interference from thermal and oxidative factors that may be present in some applications. It has been found applicable to hydraulic fluids containing both readily sheared and shear-resistant polymers. The correlation with performance in the case of hydraulic applications has been established. 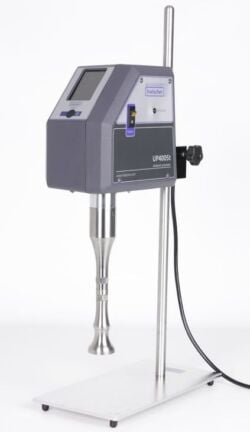 What Do I Need for ASTM D2603 Ultra-Sonic Shear Stability Testing?

Hielscher Ultrasonics supplies high-performance ultrasonic shear devices for shear stability tests according to ASTM D2603 and ASTM D5621. With a fixed frequency, reliable ultrasonic shear power, Hielscher ultra-sonic shear devices are ideal for shear stability evaluation of hydraulic fluids. Hielscher ultrasonicators are equipped with smart software and settings, which allow for sophisticated testings according to ASTM standards. The menu is easily accessible via digital touch display or browser remote control. While the frequency is fixed, which is important for reliable sonication results and ASTM standards, the amplitude can be precisely set to a desired stroke impact.
Calibration of Hielscher ultrasonicators is simple and and can be rapidly and easy done via the sophisticated menu. All digital ultrasonicators are equipped with pluggable temperature sensor, which continuously records the sample temperature and transmits it back to the ultrasonic generator, where all important sonication data such as amplitude, sonication time and duration, temperature, and pressure (when pressure sensor is mounted) are recorded automatically on a built-in SD-card. These smart features allow for reliable and reproducible ultra-sonic shear tests and make the operation user-friendly and safe.
Hielscher Ultrasonics devices for shear stability tests are conform with both, ASTM D-2603 and D-5621 standards. 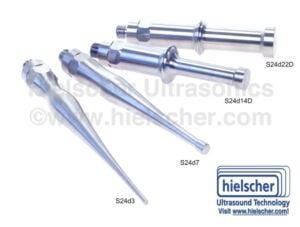 Various types of sonotrodes (probes / horns) for the sonic shear device UP400ST, which can be used for ASTM D2603 – Standard Test Method for Sonic Shear Stability of Polymer-Containing Oils