The biosynthesis of human milk oligosaccharides (HMOs) via fermentation or enzymatic reactions is a complex, consuming and often low-yielding process. Ultrasonication increases the mass transfer between substrate and cell factories ans stimulates cell growth and metabolism. Thereby, sonication intensifies fermentation and bio-chemical processes resulting in an accelerated and more efficient production of HMOs. 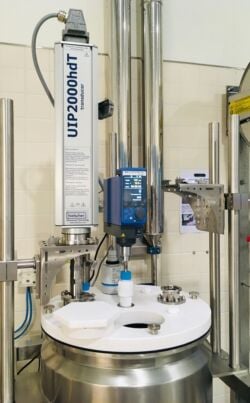 E.coli, Saccharomyces cerevisiae and Lactococcus lactis are commonly used cell factories used for the bio-production of biological molecules such as HMOs. Fermentation is a biochemical process using micro-organisms to convert a substrate into targeted biological molecules. Microbial cell factories use simple sugars as substrate, which they convert into HMOs. Since simple sugars (e.g. lactose) are an abundant, cheap substrate, this keeps the bio-synthesis process cost-efficient.
Growth and bioconversion rate are mainly influenced by the mass transfer of nutrients (substrate) to the microorganisms. The mass transfer rate is a main factor that affects the product synthesis during fermentation. Ultrasonication is well known to promote mass transfer.
During fermentation, the conditions in the bioreactor must be constantly monitored and regulated so that the cells can grow as quickly as possible in order to then produce the targeted biomolecules (e.g. oligosaccharides such as HMOs; insulin; recombinant proteins). Theoretically, the product formation starts as soon as the cell culture begins to grow. However especially in genetically modified cells such as engineered microorganisms it is usually induced later by adding a chemical substance to the substrate, which upregulates the expression of the targeted biomolecule. Ultrasonic bioreactors (sono-bioreactor) can be precisely controlled and allow for the specific stimulation of microbes. This results in an accelerated biosynthesis and higher yields.
Ultrasonic lysis and extraction: Fermentation of complex HMOs might be limited by low fermentation titers and products remaining intracellular. Ultrasonic lysis and extraction is used to release intracellular material before purification and down-stream processes.

The growth rate of microbes such as Escherichia coli, engineered E.coli, Saccharomyces cerevisiae and Lactococcus lactis can be accelerated by increasing the mass transfer rate and cell wall permeability by applying controlled low-frequency ultrasonication. As a mild, non-thermal processing technique, ultrasonication applies purely mechanical forces into the fermentation broth.
Acoustic Cavitation: The working principle of sonication is based on acoustic cavitation. The ultrasonic probe (sonotrode) couples low-frequency ultrasound waves into the medium. The ultrasound waves travel through the liquid creating alternating high-pressure (compression) / low-pressure (rarefaction) cycles. By compressing and stretching the liquid in alternating cycles, minute vacuum bubbles arise. These small vacuum bubbles grow over several cycles until they reach a size where they cannot absorb any further energy. At this point of maximum growth, the vacuum bubble implodes violently and generates locally extreme conditions, known as the phenomenon of cavitation. In the cavitational “hot-spot”, high pressure and temperature differentials and intense shear forces with liquid jets of up to 280m/sec can be observed. By these cavitational effects, thorough mass transfer and sonoporation (the perforation of cell walls and cell membranes) is achieved. The nutrients of the substrate are floated to and into the living whole cells, so that the cell factories are optimally nourished and growth as well as conversion rates are accelerated. Ultrasonic bioreactors are a simple, yet highly effective strategy to process biomass in a one-pot biosynthesis process.
A precisely controlled, mild sonication is well-known to intensify fermentation processes.
Sonication improves “the productivity of many bioprocesses involving live cells via the enhancement of substrate uptake, enhanced production or growth by increasing cell porosity, and potentially enhanced release of cell components.” (Naveena et al. 2015)
Read more about ultrasonically-assisted fermentation!

The MultiSonoReactor MSR-4 is an industrial inline homogenizer suitable for the enhanced biosynthesis of Human Milk Oligosaccharides (HMO).

Fermentation processes involve living microorganisms such as bacteria or yeast, which function as cell factories. Whilst sonication is applied to promote mass transfer and increase microorganism’s growth and conversion rate, it is crucial to control the ultrasonic intensity precisely in order to avoid the destruction of the cell factories.
Hielscher Ultrasonics is specialist in designing, manufacturing and distributing high-performance ultrasonicators, which can be precisely controlled and monitored to ensure superior fermentation yields. 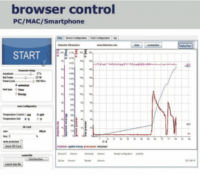 Process control is not only essential for high yields and superior quality, but enables to repeat and reproduce outcomes. Especially when ist comes to the stimulation of cell factories, the cell-specific adaptation of the sonication parameters is essential to achieve high yields and to prevent cell degradation. Therefore, all digital models of Hielscher ultrasonicators are equipped with intelligent software, which allows you to adjust, monitor, and revise sonication parameters. Ultrasonic process parameters such as amplitude, temperature, pressure, sonication duration, duty cycles, and energy input are essential to promote HMO production via fermentation.
The smart software of Hielscher ultrasonicators records automatically all important process parameters on the integrated SD-card. The automatic data recording of the sonication process are the foundation for process standardization and reproducibility / repeatability, which are required for Good Manufacturing Practices (GMP).

Hielscher offers ultrasonic probes of various size, length and geometries, which can be used for batch as well as continuous flow-through treatments. Ultrasonic reactors, also known as sono-bioreactors, are available for any volume covering the ultrasonic bioprocessing from small lab samples to pilot and fully-commercial production level.
It is well known that the location of the ultrasonic sonotrode in the reaction vessel influences the distribution of cavitation and micro-streaming within the medium. Sonotrode and ultrasonic reactor should be chosen in accordance to the processing volume of the cell broth. Whilst sonication can be performed in batch as well as in continuous mode, for high production volumes the use of a continuous flow installation is recommended. Passing through an ultrasonic flow cell, all cell medium gets exactly the same exposure to sonication ensuring the most effective treatment. Hielscher Ultrasonics broad range of ultrasonic probes and flow cell reactors allows to assemble the ideal ultrasonic bioprocessing setup.

Hielscher Ultrasonics – From Lab to Pilot to Production

Hielscher Ultrasonics covers the full spectrum of ultrasonic equipment offering compact hand-held ultrasonic homogenisers for sample preparation to bench-top and pilot systems as well as powerful industrial ultrasonic units that easily process truckloads per hour. Being versatile and flexible in installation and mounting options, Hielscher ultrasonicators can be easily integrated into all kinds of batch reactors, fed-batches or continuous flow-through setups.
Various accessories as well as customized parts allow for the ideal adaptation of your ultrasonic setup to your process requirements.
Built for 24/7 operation under full load and heavy duty in demanding conditions, Hielscher ultrasonic processors are reliable and require only low maintenance.
The table below gives you an indication of the approximate processing capacity of our ultrasonicators: