Ultrasonics is an effective means to stimulate microorganisms by mechanical vibrations and cavitation. In a sonobioreactor / ultrasonic fermenter, the ultrasonic treatment of cells and tissue becomes highly controllable since the environmental factors can be exactly determined. With ultrasonic bioreactors, the fermentation output can be significantly enhanced.

The efficiency of fermentation depends on the process conditions: Nutrients, density of the medium, temperature, oxygen / gas content and pressure are important factors that influence the microbial activity. Microorganisms as well as mammalian’s cells thrive only under certain conditions. The right conditions combined with ultrasonic stimulation can maximize the yield of fermentation. 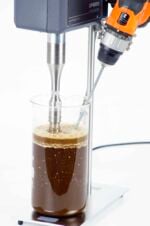 Fermentation is a metabolic process that converts sugar to acids, gases, or alcohol. It occurs in yeast and bacteria, and also in oxygen-starved muscle cells, as in the case of lactic acid fermentation. Fermentation is also used more broadly to refer to the bulk growth of microorganisms on a growth medium, often with the goal of producing a specific chemical product.
Fermentation process are carried out on industrial scale using microorganisms such as bacteria and fungi for the fermentation. Fermented products are used in the food and general industry. Chemicals, such as acetic acid, citric acid, and ethanol are produced by fermentation. The fermentation rate is influenced by the concentration of microorganisms, cells, cellular components, and enzymes as well as temperature, and pH. For aerobic fermentation, oxygen is a key factor too. Nearly all commercially produced enzymes, such as lipase, invertase and rennet, are made by fermentation with genetically modified microbes.
In general, fermentations can be divided into four types:

Sonication Before, During and After Fermentation

Sonication as pre-treatment is used to promote mass transfer and make the substrate more available to the microbes. Ultrasonic mixing promotes the mass transfer of substrates to, and products away from, the microbial cells. Ultrasonic intensification of mass transfer can be applied as pre-treatment as well as during fermentation.
For instance, ultrasonic pretreatment of rice hull was used to enhance enzymatic hydrolysis for xylooligosaccharides (XOs) production by Aspergillus japonicus (var. japonicus CY6-1). By sonication, the production of cellulolytic and xylanolytic enzymes from the rice hull was significantly enhanced. The hemicellulose yield was increased to 1.4-fold under sonication and production time was greatly shortened from 24 h to 1.5 h at 80ºC – with further potential of process optimization. The sonicated biomass is much easier convertible for the fungi so that the stability of enzyme activity is extended and the activity of CMCase, b-glucosidase, and xylanase is increased in comparison to the non-sonicated rice hull. The final fermentative products were xylotetraose, xylohexaose, and higher molecular weight xylooligosaccharides. The xylohexaose yield from the sonicated rice hull was 80% higher. 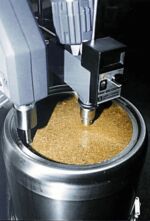 Precisely controllable and repeatable sonication helps to improve the productivity of various fermentation processes without damaging cells. The sonication intensity can be exactly adapted to the specific cell species and its requirements. By controlled sonication, the cell growth and metabolism is positively influenced and the conversions catalyzed by live cells is significantly improved, e.g. stimulating Bifidobacteria in milk.
For some fungal-driven fermentation processes, sonication is successfully used to modify growth morphology and broth rheology without affecting growth rate and yield of filamentous fungi.

For the production of intracellular components such as microbial enzymes (e.g. catalase, amylase, protease, pectinase, glucose isomerase, cellulase, hemicellulase, lipase, lactase, streptokinase) and recombinant proteins (e.g. insulin, hepatitis B vaccine, interferon, granulocyte colony-stimulating factor, streptokinase), the cells have to be lysed / disrupted after the fermentation process to release the desired proteins. By sonication, the extraction of the intracellular and extracellular polysaccharide–protein complexes from the viscous mycelial fermentation broth is facilitated. Besides its outstanding extraction yield and efficiency, sonication is well-established and reliable for cell lysis and the extraction of intracellular matter.
Click here to read mor about ultrasonic lysis and extraction!

Hielscher Ultrasonics is long-time experienced with ultrasonically stimulated processes. We offer manifold ultrasonic reactors of different sizes and geometries. Alternatively, we offer customized solutions for the integration into your existing bioreactor. Since our ultrasonic processors are very versatile and require only limited space, retrofitting into existing biotechnological plants can be realized without problems.
The table below, indicates general device recommendations depending on the batch volume or flow rate to be processed. Click at the device type to get more information on each device. 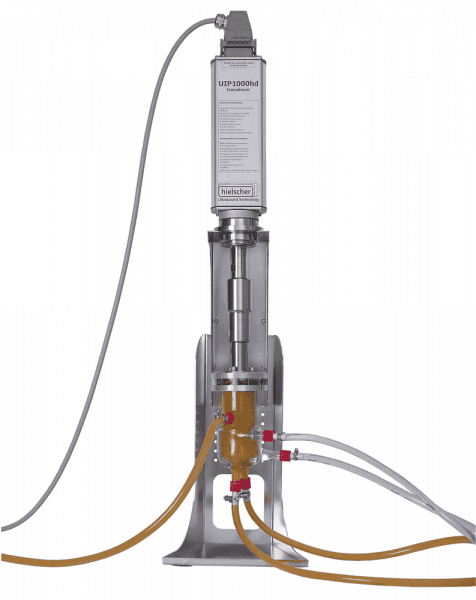